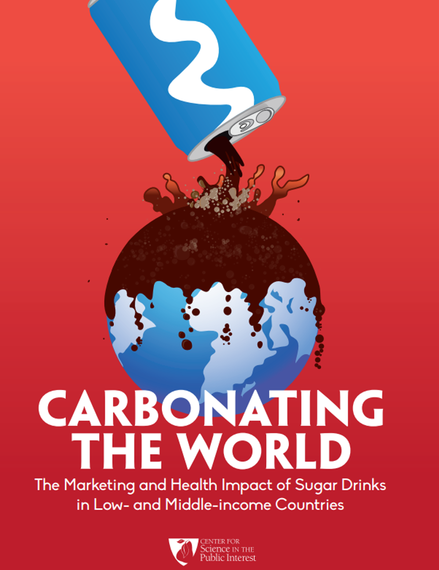 As the childhood "Globesity" epidemic continues to make headlines, The Center for the Science in the Public Interest (CSPI) released a new report this week called Carbonating the World, highlighting how Big Soda markets soda to children across the globe.

The near 100-page report takes an in-depth look at soft drinks' rising impact on health and global trends in soft drink consumption - namely how Coke, Pepsi, and other national and regional soda companies are expanding their reach around the world - often at the health expense of countries with the lowest income populations. For example, Mexico's per-capita beverage consumption is among the highest in the world, and also has the most citizens with type 2 diabetes. In India, the soft drink industry spends 10 billion per year --home to 51 million people who suffer from diabetes.

While Coke and Pepsi have made public pledges not to market to children, the CSPI report also outlines how both companies clearly target children, as well as adolescents both in and around schools, and through creative marketing ploys involving cartoon characters, celebrities, sports sponsorships, social media, and incentives.

"In countries from Ghana to South Africa, advertisements for SSBs are even found on school entrance signs. Thus, children are repeatedly exposed to SSB advertising each and every school day. In effect, the schools are endorsing the beverages", says CSPI.

The report comes just days after UK's Celebrity Chef Jamie Oliver declared that his own anti-obesity campaign would become "more ninja" against the Conservatives unless there was a serious public health policy to protect the nation's children. "Mr Cameron, please be brave and be bold," Oliver said. "Put the stuff in the basket that's going to shift Britain please, as a parent not a politician. It is personal, it's about you taking us in to the next decade and setting precedent that we can't go back on."

Dietitians of Canada - the national professional association for dietitians, representing 6,000 members at the local, provincial and national level, also released a position statement on February 9, that recommends an excise tax of at least 10-20% be applied to sugar-sweetened beverages sold in Canada given the negative impact of these products on the health of the population.

The new CSPI report recommends barring the advertising and sale of sugar drinks (and other unhealthy foods) in schools and barring advertisements for sugar drinks in all media directed at children, including television, Internet sites, signage in and around schools, text messages and other mobile media, and magazines.

"Companies take advantage of the vulnerability of those communities to market their products. The result: racially and culturally discriminatory marketing practices that worsen the poor health conditions and marginalization these groups already experience", said Alejandro Calvillo Unna, executive director of El Poder del Consumidor, the Mexican consumer group that led that country's successful campaign for a tax.

"With this report, the Center for Science in the Public Interest contributes to the efforts of this movement by unveiling the marketing strategies of Big Soda in countries from Mexico to Ghana to Indonesia and by highlighting efforts being made around the world to regulate the products. This is a victory in progress that will protect consumers the world over."

For more information on Carbonating the World, visit CSPI here.

About CSPI - The Center for Science in the Public Interest (CSPI) is a consumer advocacy organization whose twin missions are to conduct innovative research and advocacy programs in health and nutrition, and to provide consumers with current, useful information about their health and well-being.