When the University of Oregon and Ohio State University football teams squared off in the national championship game earlier this month, the undisputed winner was Nike. Both schools are under multi-million dollar contracts with the apparel behemoth, and its "swoosh" was proudly on display in front of a record-setting television audience.

In addition to Nike, competitors like Under Armour and adidas also spend substantial dollars to acquire the exclusive sponsorship rights for college teams. Why? Because sponsoring college sports teams can lead to unparalleled exposure for brands. With the Oregon football program alone, Nike enjoys a 3-hour, grassroots commercial every time that the team plays on national television, and there is often commentary directly pertaining to the team's provocative wardrobe both before and after its games.

Not surprisingly, the apparel or "gear" that coveted football prospects prefer has become a larger part of the recruiting equation. Many recruits admit that the apparel they stand to receive as future college athletes can play a factor in deciding which school to attend. Brands not only spend substantial sums on colleges but also on the events and national showcases intended for premier football recruits. For instance, Nike hosts The Opening and Elite 11 in Beaverton, Ore. each year. Under Armour runs its very own All-American game, and adidas sponsors the longstanding U.S. Army All-American Bowl.

Seeking to gauge the effectiveness of such marketing spend, FieldLevel recently began collecting data directly from thousands of football recruits across the nation. Recruits were asked to enter their favorite apparel, cleat and glove companies. But in order to submit their preferences, high school prospects were required to have verified interest from at least one college team. Thus, the data gleans deeper insight about this influential faction of athletes than Facebook Likes or Twitter Favorites.

According to the January 2015 report, Nike was the clear favorite with 73 percent of recruits indicating that it was their preferred sports apparel company. Under Armour was second and adidas was third with 16 percent and 7 percent, respectively. A small percentage of recruits entered other brands like New Balance and Reebok as shown in the chart below. 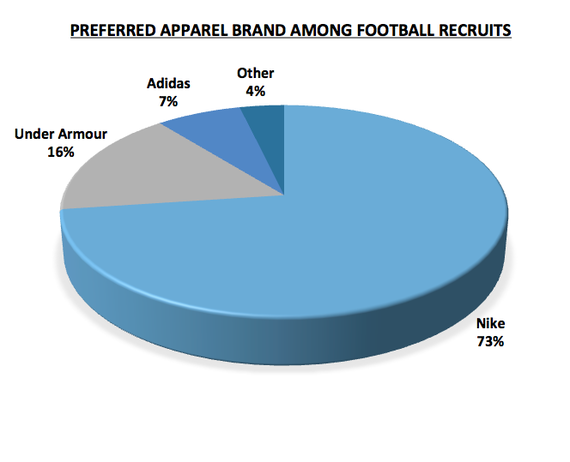 The data preferences for football cleats were fairly consistent with general apparel findings (above). Nike was first, Under Armour second, and adidas third with 71 percent, 18 percent and 10 percent, respectively.

However, there was a surprise in the glove category among actively recruited football players. Cutters, based in Minnesota, outpaced adidas and was tied with Under Armour for second place, with each being selected by 13 percent of recruits. Nike was still the heavy favorite, garnering a 67 percent share.

While this new data shows that Nike currently dominates the preferences of football recruits, the college football sponsorship landscape is highly competitive and may be prone to change. Under Amour CEO, Kevin Plank, hasn't been shy about his intention to one day surpass his Oregon-based rival. Meanwhile, adidas recently wooed both the University of Miami and Arizona State University away from Nike. Only time will tell as this considerable market evolves.