In the past month, how many car advertisements have you seen? I've seen a lot, and I don't know about you, but I'm excited to drive fast on forested roads with my hot date by my side to reach our luxury destination with valet parking.

Now, how many of those car ads were for electric cars? If that number is more than zero, then you're in the minority. New data shows what we've long observed - that auto companies and auto dealers are focusing much less on electric vehicle (EV) advertising than on advertising for conventional gas-guzzling cars and trucks - especially outside of California.

With the midterm review underway of California's zero emission vehicle (ZEV) regulations, which require automakers to sell millions of EVs in California and the nine Northeastern and Western states that follow the regulations, this data shows that automakers can be doing much more to educate the public about electric vehicles, including through ads that will increase their electric vehicle sales.

The 2015 data, commissioned and shared with the Sierra Club and others by Northeast States for Coordinated Air Use Management (NESCAUM), is from CompetiTrack and Motor Intelligence, two respected companies that track auto advertising activity. 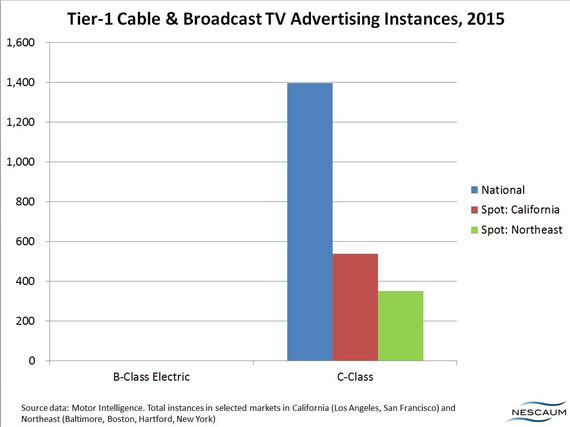 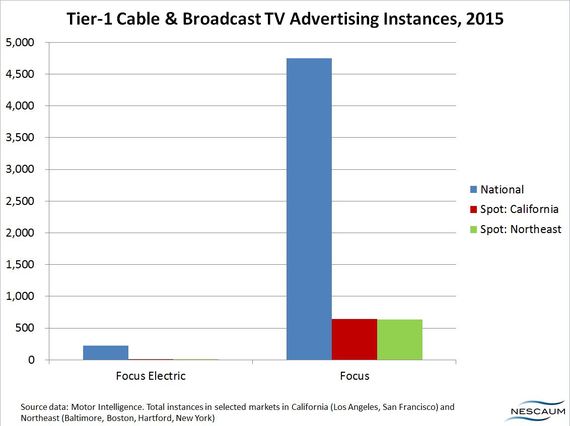 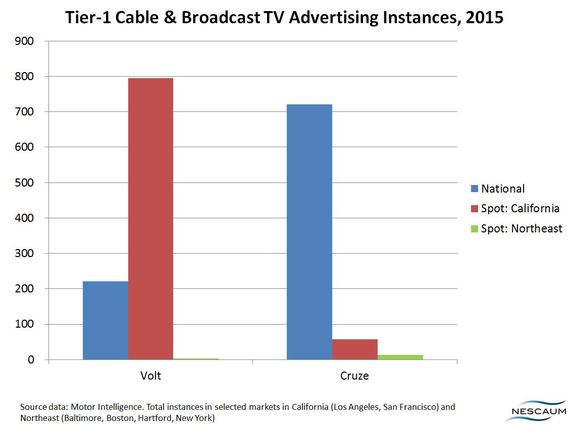 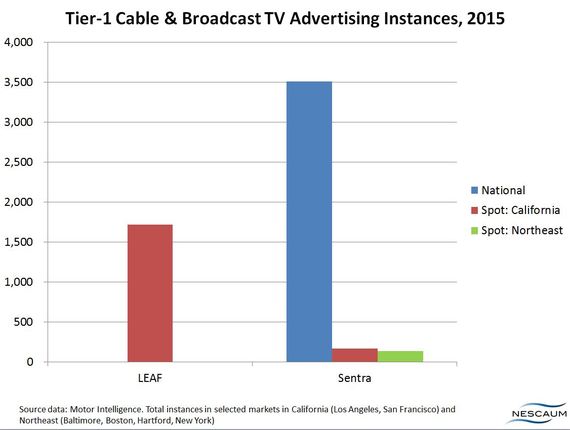 The auto industry spends billions of dollars on ads for a reason - it helps them sell cars. However, BMW, GM, Nissan, and Ford spent virtually nothing on advertising the i3, Volt, Leaf, or plug-in Fusion Energi to a northeast-focused audience. Nothing on TV, in print, on the web, etc. For a California-focused audience, that increased to a range of about $1 million to $3.5 million. For a nationally focused audience, it ranged from $0 (yes, $0!) for Ford to nearly $19 million for BMW (no surprise that BMW EV sales are a much higher percentage of its total sales than those of Ford). 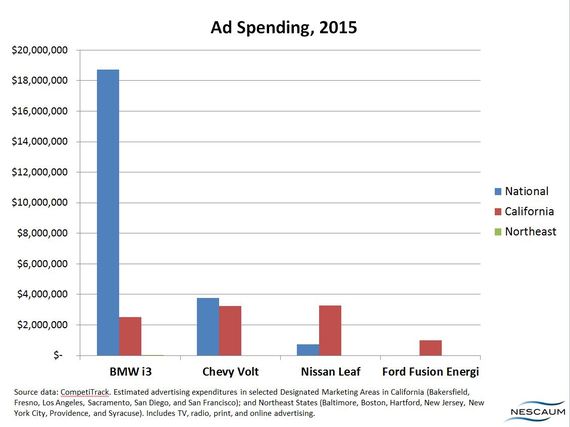 An unexpected outlier on the regional level is Volkswagen, the auto company currently under heat for cheating on emissions tests in its diesel vehicles. While Volkswagen dedicated about 2,200 national TV instances for its conventional Golf and none for its electric e-Golf, the company did invest in nearly twice as many TV ads for the e-Golf in the northeast than it did in California. This may be because Golf has been a strong brand in the Northeast and/or because VW entered the EV market later than many other companies already accelerating in California and saw a new EV market opportunity in the Northeast. 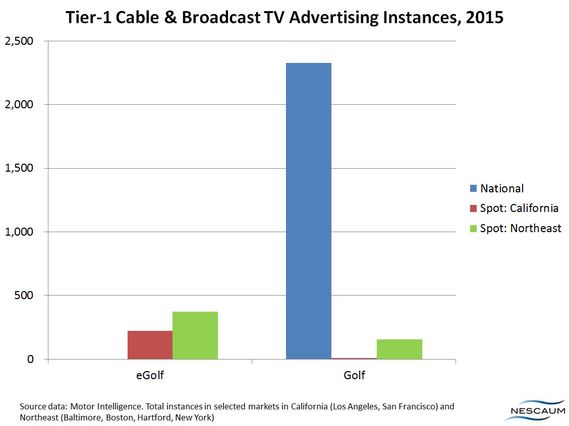 The auto industry says it is doing everything it can to sell EVs and comply with zero emission vehicle regulations, but "consumers just don't want these vehicles." We know this is simply not true. For starters, we at the Sierra Club recruited 174 volunteers to call or visit 308 car dealerships or stores in the 10 ZEV states to let us know about their EV shopping experience. Overall, the volunteers reported that there was much to be desired: many dealerships did not have EVs in stock, hid the EVs at the back of the lot, and didn't have trained salespeople ready to tout the many benefits of EVs, including thousands of dollars in consumer state and federal tax credits and rebates. Some dealerships couldn't even provide test drives because they had neglected to simply charge the cars.

The Union of Concerned Scientists recently released a study that showed that the auto industry severely restricts its EV inventory. While there are 22 EVs for sale in California, no state outside of California, including the ZEV states required to sell EVs, had more than 14 electric vehicles available for sale. In 13 states, automakers offered a measly four or fewer electric vehicle models for sale. UCS and Consumers Union released another study that found that a majority of drivers in the Northeast have an interest in EV options. However, limited options mean limited sales - EVs now account for just over 1 percent of total U.S. auto monthly sales.

We're not saying the auto industry needs to spend the same amount on electric vehicle advertising as it does their biggest sellers, but this data on the lack of auto industry investment in EV advertising is just one more example of how the auto industry is not doing all it can, or even the bare minimum needed to sell EVs. To get electric vehicles on the road, the auto industry needs to ramp up its efforts. Regulators will soon conclude their mid-term review of the 10-state ZEV regulations. Now is the perfect time for regulators to take a hard look at all of this mounting evidence that we need stronger ZEV regulations that will actually hold the industry accountable to escalating EV sales that will slash dangerous emissions.

I have seen some great ads for EVs over the years. BMW put out an entertaining one for the i3 with former Today Show hosts Katie Couric and Bryant Gumbel during the 2015 Superbowl. Nissan launched its Leaf in 2010 with this heart-warming polar bear ad. Probably my favorite EV ad was Ford's hilarious response to Cadillac's luxury ELR ad with a parody featuring a plug-in Ford driver talking about manure (just watch the Cadillac one and then the Ford one, and tell me you didn't laugh out loud).

Wouldn't it be terrific if these EV ads were more the rule and not the rare exception?

All graphs courtesy of NESCAUM.