A U.S. embassy measure showed levels of poisonous airborne particles, known as PM 2.5, had reached 495 on Monday morning, compared with the upper limit of “good” quality air at 50.

India’s weather office said forecast rain over the next three days could help clear the smog.

“Light rainfall is likely in states surrounding Delhi and in Delhi over the next three days, and this could result in a change in wind pattern in the region,” Charan Singh, a scientist at India Meteorological Department, told Reuters.

The Delhi state government declared a public health emergency last week after pollution levels in the city spiked, a yearly phenomenon blamed on a combination of illegal crop burning in northern states, vehicle exhausts and dust.

Over the weekend, the government said it planned to use fire trucks to spray water in parts of the capital, but the moves have had little effect.

A senior federal government official said there was little more the government could do.

“We can only do this much, and now we will have to wait for rains to clean the atmosphere,” said Prashant Gargava, an official at the Central Pollution Control Board, a federal body.

Gargava, who is in-charge of monitoring air quality, said Delhi’s air has been consistently in the “hazardous” zone, despite measures such as a halt to construction and increasing car parking charges four-fold to encourage people to use public transportation.

The PM 2.5 airborne particles are about 30 times finer than a human hair. The particles can be inhaled deep into the lungs, causing respiratory diseases and other ailments. Hospitals in the capital have seen a spike in the number of patients coming in with respiratory complaints, according to media reports.

“Every second we are damaging our lungs, but we cannot stop breathing,” said Arvind Kumar, the head of the chest and lung surgery department at the Sir Ganga Ram hospital in the city.

United Airlines said it had resumed flights from Newark, New Jersey to New Delhi, India on Sunday, after suspending the service temporarily over concerns about poor air quality in the Indian capital.

State and federal governments decided to reopen schools on Monday after closing them temporarily for a few days last week. The move, however, is likely to add more vehicles on the road. Enforcement agencies said they were also unable to impose a blanket ban on movement of commercial trucks.

Aarti Menon, a teacher at a primary school in New Delhi, said her family was wearing mask even when they were indoors during the weekend.

“Not everyone can afford an air purifier or air-conditioned car. We are all living in hell,” said Menon, a mother of two teenage daughters.

The National Green Tribunal, an environment court, has directed the Delhi government and neighboring states to stop farmers from burning crop residue. But the federal and state governments have not been able to do so yet.

A New Delhi-based non-governmental organization, TARA Homes for Children, which supports 60 poor children, said it was seeking donations to buy at least five air purifiers. “Some of the children have breathing issues and couldn’t go to school,” said a volunteer at the NGO. 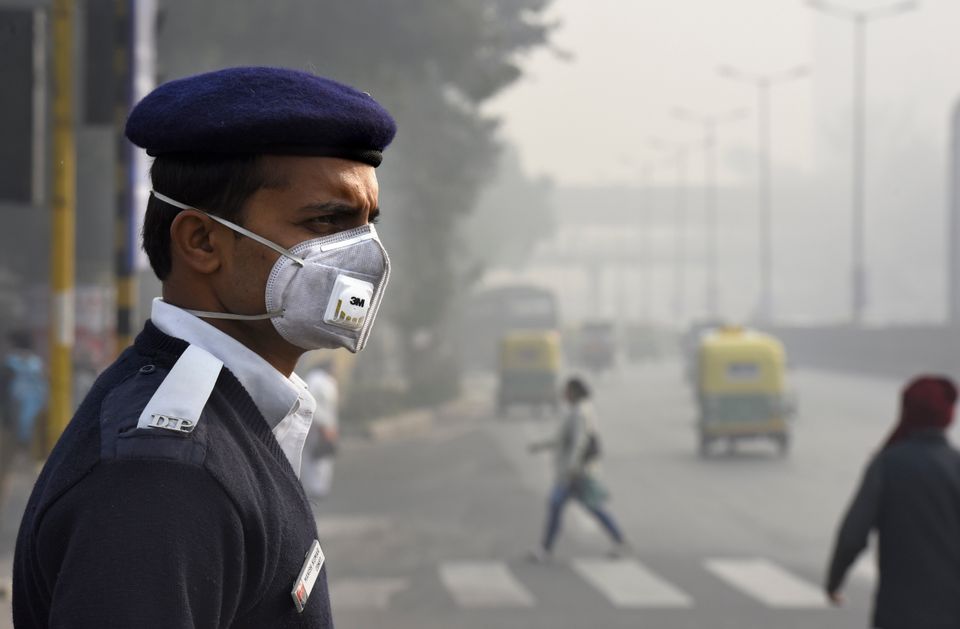 1 / 3
A traffic policeman wears a mask on the road in New Delhi on Jan. 4, 2016.
Arvind Yadav/Hindustan Times/Getty Images