Last year, when Oxford Dictionaries announced a handful of new words they'd be welcoming -- including double denim (which is absolutely two words) and tl;dr (an acronym which seems to have been removed shortly after the announcement) -- there was a media storm surrounding the addition of twerk.

The New York Times reported, "the word is getting some acknowledgment from one of the English language’s most august reference volumes," and noted that the addition isn't too egregious because twerk is not a fad, but is actually "about two decades old."

But if they'd dug a little deeper, they'd have found that twerk was not, in fact, added to the Oxford English Dictionary, which is a historical text and has a high bar for entry, but to Oxford Dictionaries Online, which serves as a reference for slang and trendy phrases that may or may not stand the test of time.

This month's additions to Oxford Dictionaries Online, for example, include time suck, white pizza, snacky, and perf. It's pretty upsetting to imagine our children's children thumbing through a dusty, weighty book in search of perfunctory and to first stumble upon perf. Thankfully, this won't be the case.

Oxford explains the difference between the dictionaries: "While ODO focuses on the current language and practical usage, the OED shows how words and meanings have changed over time." This is why the words recently added to the OED -- sciency, bookends, empower -- are much less flashy than those added to the ODO, and are therefore less publicized.

It's good that dictionaries now provide a separate resource for words that are temporarily impactful, else we'd be left to our own devices to figure out the meaning of BYOD or phablet. Such words are capable of pervading our speech much more quickly than they could in pre-Internet days. Writes Oxford Dictionaries, "It used to be the case that a new term had to be used over a period of two or three years before we could consider adding it to a print dictionary. In today's digital age, the situation has changed."

Merriam-Webster provides a similar temporary home for words that are commonly used, but haven't yet earned a permanent spot in the history books: its New Words & Slang site. To add words to its more permanent dictionary, Merriam-Webster uses a citation system based on time and usage: "The number and range of citations needed to add a word to the dictionary varies. In rare cases, a word jumps onto the scene and is both instantly prevalent and likely to last, as was the case in the 1980s with AIDS."

So, while twerk still only presides in more transient dictionaries, selfie has made its way into the permanent historical text. A quick Google trends search shows that the latter word has been steadily increasing in popularity, whereas the former saw a quick, Miley-induced spike before tapering off again: 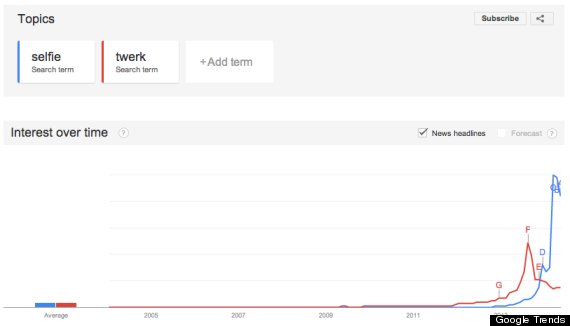 The popularity of selfie versus twerk in online search

That said, next time you hear of some wack words being added to the dictionary, don't panic! The likelihood that they'll sneak their way into leather-bound books with densely inked pages is slim to none.