An enormous carnivorous dinosaur that once roamed North America kept Tyrannosaurus rex from achieving its potential for millions of years, a new discovery suggests.

The new dinosaur, dubbed Siats meekerorum, is part of a group of giant predators known as carcharodontosaurs, and it's only the second of this group to be discovered in North America. 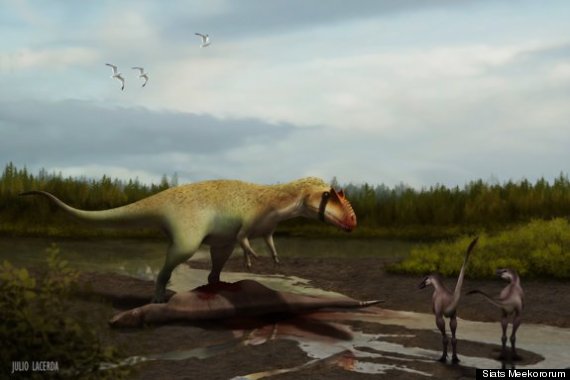 Siats meekerorum in its marshy habitat keeps small-bodied tyrannosaurs from its kill.

North Carolina State University paleontologist Lindsay Zanno discovered the Siats bones eroding out of a hillside in Utah in 2008.

"It's easily the most exciting thing that I've found so far," Zanno, who heads the paleontology lab at the North Carolina Museum of Natural Science, told LiveScience.

T. rex lived in the late Cretaceous period about 65 million years ago. Paleontologists know a good deal about the "tyrant lizard" and its ecosystem in North America, just as they know lots about the Late Jurassic period, the time of such famous dinos as Allosaurus, Apatosaurus and Stegosaurus, Zanno said. But between the two, there's a 60-million-year gap. [Image Gallery: The Life of T. Rex]

"There's a huge gap in our understanding of what lived in between those two really unique dinosaur ecosystems," Zanno said.

For that reason, Zanno and her colleagues focused on 98-million-year-old rocks, right in the middle of that gap. As they excavated Siets from these rocks, they quickly realized they had something good. Two-legged theropod dinosaurs like T. rex have thin-walled bones. The Siats specimen shared this feature.

At the time Siats reigned, T. rex had not yet evolved. Its tyrannosaur ancestors were scrawny things, no bigger than large dogs, Zanno said. At some point in the Late Cretaceous, Siats went extinct, clearing the ecosystem of its top predator and giving tyrannosaurs the room to evolve into giants like the recently discovered Lythronax and T. rex.

Siats (pronounced see-atch) was a bruiser. The bones Zanno discovered belong to a juvenile, and conservative estimates suggest it was about 30 feet (10 meters) long and weighed 9,000 lbs. (4,000 kilograms). An adult would have put on another couple thousand pounds, Zanno said. [25 Amazing Ancient Beasts]

T. rex, at twice that weight, is still the undisputed giant of North American Cretaceous predators, but Siats is in the running for the No. 2 spot with another carcharodontosaur, Acrocanthosaurus, Zanno said.

Acrocanthosauruslived about 10 million years before Siats, and Siats is in a different branch of the carcharodontosaur family, the Neovenatoridae. This is the first time a member of the Neovenatoridae has been found in North America.

In Siats' day, what is now Utah was marshy and wet, positioned along the coast of the Western Interior Seaway, a shallow sea that once bisected North America.

The researchers recovered most of Siats' backbone and tail, along with portions of its hip and back leg. They've also found at least three other new dinosaurs in the same-aged rock, Zanno said.

"In the next three to five years we really hope to be able to bring to light more of what this lost ecosystem looked like," she said.

The researchers report their finding today (Nov. 22) in the journal Nature Communications.