Paleontologists in South Africa have announced the name for a new dinosaur species, but they didn't have to do any digging to find the creature's bones.

Instead, the fossilized remains of the 200-million-year-old herbivore have been part of South Africa's largest fossil collection at Wits University since they were found in the 1930s, the SABC reported. Researchers thought they were from a South African dinosaur called Aardonyx, another long-necked herbivorous dinosaur, but the Guardian reports that when they compared the bones for recent research, they realized something was off.

"This find indicates the importance of relooking at old material that has only been cursorily studied in the past, in order to re-evaluate past preconceptions about sauropodomorph diversity in light of new data," Emil Krupandan, a University of Cape Town graduate student and study co-author, said in the news release.

Paleontologists from South Africa and Argentina named the new species Sefapanosaurus zastronensis and detailed their discovery in a study published Tuesday in the Zoological Journal of the Linnean Society. 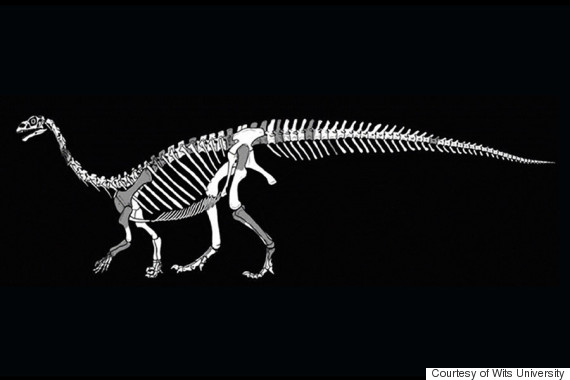 The name comes from the word "sefapano," or "cross" in the Sesotho language of South Africa, where the remains were originally discovered. One of the dinosaur's ankle bones is shaped like a cross, reported the Guardian.

“When you look at the fossil record you think of one dinosaur hanging out, but it was probably an ecosystem as diverse as that of mammals today," said Jonah Choiniere, co-author and senior researcher in dinosaur paleobiology at the Evolutionary Studies Institute at Wits University, according to the Guardian.