Seventy years after the end of World War II, the Holocaust remains a vital source of drama for motion pictures. Two very different documentaries opening at Manhattan's Quad Cinema this month demonstrate how the act of filmmaking can be commemorative, investigative, and even revelatory. 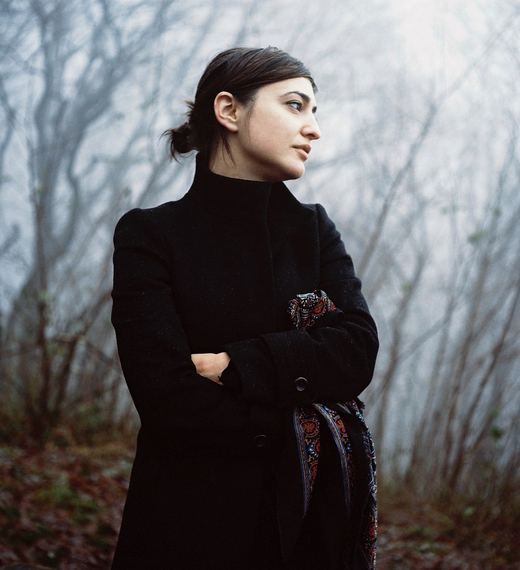 Farewell Herr Schwarz (currently playing) represents the compelling personal quest of Yael Reuveny, an Israeli member of "the third generation" (grandchildren of Holocaust survivors). She explores family history in an accessible and illuminating way, tracing ancestral burdens from Israel to Germany, where she now lives.

The Touch of an Angel (opening January 16 at the Quad, as well as the Laemmle Town Center 5 in LA) is rooted in the testimony of "first generation" survivor Henryk Schönker, a Polish Jew from the town of Oświęcim (renamed Auschwitz by the Nazis). After the war, he moved back to Oświęcim, but was forced to leave in 1955 and emigrated to Israel.

Farewell Herr Schwarz , a co-production of Germany and Israel, traces Yael Reuveny's fascination with her grandmother Michla's tale of separation from her brother Feiv'ke: originally from Vilna, both survived the Holocaust, but never found each other in 1945 at the Lodz train station where they were supposed to meet. She traveled to Palestine, assuming he died.

But he was alive. He chose to stay in the very area of Schlieben where he had been a Buchenwald prisoner. Renamed Peter Schwartz, and married to a Gentile woman, he remained secretive about his past. His son Uwe learned only in 1995 that his father was Jewish--a heritage he embraces during the film's second section. The third part focuses on Stephan---the grandson of Peter Schwartz--who studies Jewish history in Berlin and then moves to Jerusalem.

Photographs are suggestive in Farewell Herr Schwarz , which returns to a cracked pre-war photo in which the two siblings are beside each other--the crease representing all that ultimately separated them. Later, Stephan shows Yael a framed photo of her great-uncle Peter, taken three months after his Liberation from Buchenwald: while still wearing a concentration camp uniform, he is smiling--along with other inmates, now holding rifles.

Given the importance of photos in Farewell Herr Schwarz , the film's inclusion of Holocaust Remembrance Day in Israel--with everyone frozen in place--suggests a static memorializing. This is a contrast to the very mobile act of commemoration practiced by Reuveny's filmmaking.

Tel Aviv is also the current home of Henryk Schönker, but The Touch of an Angel begins with him entering an abandoned, ruined space and painting a canvas there. What a surprise to learn that this was his family home in Oświęcim, which the Nazis turned into their headquarters. He is a riveting subject and--although deaf--speaks an elegant pre-war Polish. 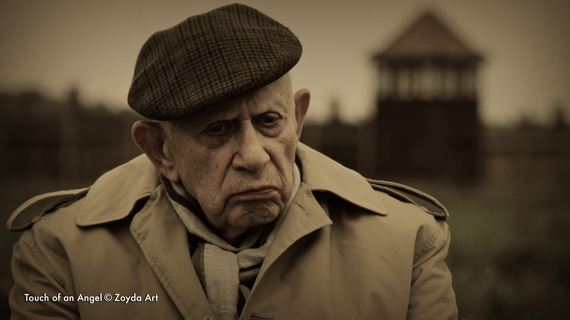 In 1939, Schönker's father was the chairman of the Jewish community, whose task--ordered by German military authorites--was to organize the Bureau of Emigration of Jews to Palestine. But The Touch of an Angel is less didactic or historical than poetic, including imaginary glimpses of the miracles Schönker recalls.

Director Marek Tomasz Pawlowski superimposes actors' faces on old photos, an effect that prepares for the insertion of actors into archival footage. (The extras include Oświęcim's own inhabitants.) While some critics bristle at reenactments in a documentary, art was so important to Henryk and his family (music as well as painting) that the aesthetic experimentation seems valid.

For example, he remembers hearing in Cracow a neighbor's "violin weeping" and says, "I inhaled this music." Like Dariusz Jablonski's magnificent film Photographer, The Touch of an Angel interweaves the score of Michal Lorenc contrapuntally, as gentle music accompanies Schönker's wrenching memories.

Pawlowski calls his technique "archicollage." Interviewed via e-mail, he said it enabled a "journey into the past, creating short, silent impressions through the stylization of archival material." He already used this type of experimentation in his documentary of 2007, The Runaway (winner of thirteen international awards).

The film's producer Małgorzata Walczak explained that it took many years of research by historians before their company Zoyda Art Production found evidence supporting Henryk's recollections. "Leo Schönker, Henryk's father, was the last chairman of the Jewish Community in Auschwitz," she wrote in an e-mail.

"He established the Bureau of Emigration of Jews to Palestine. This chance for legal immigration is hardly known, and raises the question of how many Jewish refugees might have been saved if other countries had accepted them. Summoned by Eichmann to Berlin, he reported on his Bureau's activities in the hope of saving thousands of Jews willing to emigrate."

In Berlin, Leo Schönker also met with Professor Leo Baeck, "who said about the tragic situation of Europe's Jews, "'They are going to be squeezed like a lemon and the peel is going to be thrown into the furnace.'"

This fearful prediction was indeed realized, but a fraction of European Jewry managed to survive. Films like Farewell Herr Schwarz and The Touch of an Angel provide a bridge from their experiences to our own time. As Yael Reuveny put it, " Farewell Herr Schwarz is not a film about the Holocaust - or about Peter or Feiv'ke or my grandmother - but about us, their children and grandchildren." She called storytelling a "survival method ... to put order into the catastrophe."

___________________
Columbia University Film Professor Annette Insdorf is the author of Indelible Shadows: Film and the Holocaust.