As Instagram was being criticized on the Internet for its new Terms of Service, which don't even take effect until Jan. 16, 2013 and are likely to be altered, I saw an opportunity to revive my "eeriekanalley" Yahoo account.

If Instagram was going to make big changes to its service, as many feared when the announcement went down, I at least wanted to know what else was out there.

I actually tested out several alternatives. The one I instantly fell in love with was a once vibrant, Internet-dominating photo-sharing site, pronounced dead as recently as May, which has as big an opportunity as ever -- right now -- for life again. That glimmering light is now shining brighter, and it's called Flickr.

It's a Yahoo-owned service that oh-so-conveniently just launched a huge revamp of its iOS app a week ago.

Before I go on, I want to make it clear that based on Instagram's response in a blog post titled "Thank you, and we're listening," it now seems likely the Terms will be revised as a result of the Internet uproar, including from celebrities. Perhaps there won't be major changes after all, at least in the short term.

The question is: Now that I've found something else I like, will I return? How about the others who say they've had enough with Instagram? (News flash: There is a larger world of photo-sharing outside of Instagram!)

As I began using Flickr's new mobile app, I immediately realized: This can do everything Instagram can do. Plus more.

Ability to add filters? Check. (In fact, some of the filters -- named after animals like the Orangutan -- I'm liking more than the Instagram ones.)

Geo-location tied in so you can see photos on a map? Check.

Then it goes a bit above and beyond. You can upload higher-quality images on Flickr. With a few taps on your mobile screen, you can view it in its highest resolution, or you can see the best version on your desktop.

With Flickr's app, you have a suite of editing tools: you can tweak a photo's brightness, contrast, saturation, and make other changes.

With Flickr's app, you can upload multiple photos at once and create albums, groups or sets of photos.

With Flickr's app, when you view your contacts' photos (their version of who you're following), you see a stream of all their most recent photos in the main feed that you can swipe through carousel-style instead of just one photo at a time.

With Flickr's app, you have a more robust search -- search among your friends' photos only, for instance, or search the entire service. Search for groups around related photos. Search your own photostream for keywords.

The only area where I see Flickr fall short is the sense of community Instagram has built up. That is, so many of my friends are on Instagram (fewer active on Flickr; however, those that are I've seen are quite active). And Instagram's built communities around hashtags like #instasleep that have exploded.

But Flickr has all the functionality to replicate the community experience. Enough of my friends are there that I can still get the satisfaction of like bubbles or comments popping up as I post photos (admit it, we all like when our photos resonate with others and we can see real-time interaction; the sense of connection is awesome).

We'll see if my experience lasts. But for now, it's delightful.

And one last thing: the user wins in the end. Competition is a fantastic thing for Instagram and for users. The fact that Flickr has such a robust alternative will push Instagram and Facebook to innovate, and match these offerings and perhaps go beyond with new features of their own.

We should celebrate this opportunity to play with other services. There really is no reason we should be beholden to any one service just because "everyone else is there." This is also a reminder that, hey, outside of these things we can get obsessed with, there is a larger world out there. 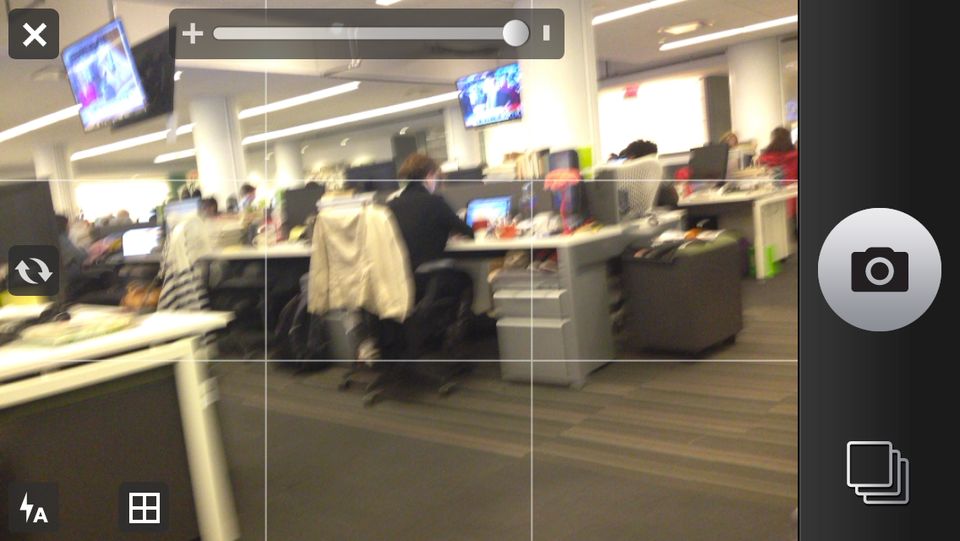 1 / 9
Flickr's Camera
Look familiar? You can also zoom, switch to front-facing, turn the grid on or off, adjust flash, and pull old photos already in your Camera Roll.