Yesterday may have been a federal holiday, but it was a busy day for new polls from four highly competitive contests for Governor in Florida, Rhode Island, Maine and Oregon.

In Florida, three new surveys conducted in the last week reaffirm a close race between Republican Rick Scott and Democrat Alex Sink and suggest that Sink may be rebounding slightly from narrow deficits in mid-September. This morning, Quinnipiac University released a new survey showing a dead-heat, with Scott edging Sink by a single percentage point (45% to 44), a margin well within the survey's 3-point margin of error. That result falls in between a just released Rasmussen automated survey conducted last Thursday showing Scott with a three-point advantage (50% to 47%) and a Mason-Dixon live-interviewer poll conducted earlier last week showing Sink up by four points (44% to 40%). 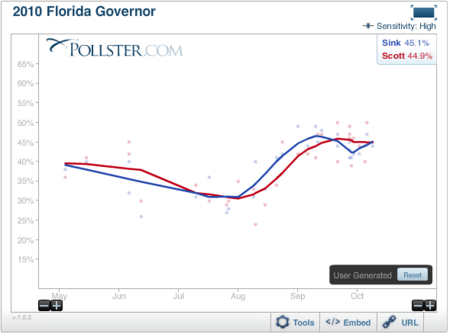 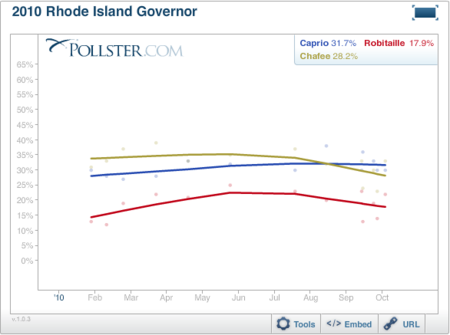 Maine features a similarly wide-open gubernatorial race. A new survey conducted by the Maine Center for Public Opinion for the website Pine Tree Politics shows Republican Paul Lepage with a one-point edge over Democrat Libby Mitchell (30% to 29%) with independent candidates Eliot Cutler at 11%, Shawn Moodey at 5% and nearly a quarter of the voters (24%) undecided. Those results are a near match to a Critical Insights/MaineToday Media poll conducted in late September.

These two most recent measurements show significantly less support for Republican LePage than previous polls and move our trend estimate in Maine to a near tie between LePage (30.2%) and Mitchell (29.7%). The close margin and large poll of undecided voters make Maine an obvious toss-up.

Data has been relatively sparse in Oregon, with just two public polls released since August, but the latest Rasmussen automated survey shows a deadlocked contest, with Democrat John Kitzhaber at 48% and Republican Chris Dudley at 46%. A SurveyUSA automated poll in mid-September had Dudley leading by six (49% to 43%). Our trend estimate splits the difference and gives Dudley an advantage narrow enough (47.0% to 45.4%) to merit a toss-up designation.