As we head into winter, families and businesses across Massachusetts are bracing themselves for higher electricity costs: National Grid announced recently that prices would be increasing significantly, and other utilities are likely to follow suit soon.

The nation's biggest fossil fuel giants want to you to believe that they can help. Kinder Morgan, one of the country's biggest oil and gas companies, has proposed a brand-new pipeline to bring gas from upstate New York. Spectra Energy, another massive fossil fuel conglomerate, is hoping to expand an existing gas pipeline that runs from New Jersey to Massachusetts.

But the simple equation offered by fossil fuel companies - more gas pipelines equals lower electricity prices - is sleight of hand, not sound policy. The proposed pipelines will not be ready until 2018 at the earliest (see here and here), so they will not have any impact on this winter's electricity bills (or next winter's, or the following winter's). And new gas pipelines simply do not make sense as a long-term answer to our energy woes. 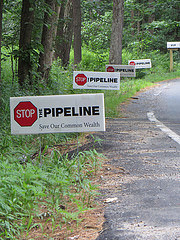 Short-term spikes in demand are the primary driver of high electricity rates. 63% of Massachusetts' electricity comes from gas, and more than 40% of Massachusetts families rely on gas to heat their homes. On the very coldest winter days, as people come home from work and turn on appliances while cranking up the heat, sharp increases in demand for gas cause prices to skyrocket. Although short-lived and relatively rare, usually occurring less than 30 days a year, these price spikes are very costly for power plant owners, and most power plant operators are raising rates now to cushion themselves.

Building massive new pipelines is not the solution. Our existing pipelines are not used at full capacity most of the time, and the proposed Kinder Morgan and Spectra pipelines are almost comically oversized. Trying to deal with occasional spikes in demand by constructing huge new gas pipelines is like putting an eight-lane highway across Nantucket just to handle the crowds on July Fourth. In fact, the pipelines are so much bigger than they need to be that many observers are starting to think the gas may be destined primarily for export, not local customers. 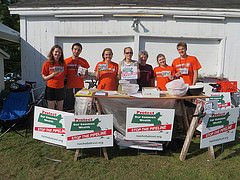 Even if new pipelines could be built quickly, and even if they operated at full capacity, the only way that new pipelines could help is by reducing the difference between gas prices in Massachusetts and gas prices elsewhere in the country (the so-called "basis differential"). The pipelines cannot protect us from nationwide increases in the cost of gas - in fact, by increasing our reliance on gas, they make us more vulnerable to rising prices. Gas prices are highly volatile, and although prices have been relatively low in recent years, the Energy Information Agency expects gas prices to rise dramatically over the next several decades.

Expanded reliance on gas carries other steep costs: polluted groundwater from fracking, despoiled wilderness around drilling wells and pipelines, and the constant risk of terrifying explosions. Gas wells, pipelines, and plants also exacerbate climate change by leaking methane, an extremely powerful greenhouse gas. We should be working to reduce our greenhouse gas emissions as much as possible; without strong action to confront climate change, rising seas, floods, heatwaves, collapsing fisheries, and a shortened winter snow season will cost the Massachusetts economy hundreds of billions of dollars and take a terrible toll in families displaced and lives lost.

Instead of installing new gas infrastructure, we should be pursuing energy policies that keep prices low without imperiling our health, our environment or our climate. Expanding the state's groundbreaking energy efficiency programs would reduce gas consumption, especially on cold winter days, while creating thousands of new jobs. Market reforms would help protect power plant generators from price spikes. Investing in wind, solar, geothermal, and other forms of clean energy would diversify our energy mix while addressing the existential threat of climate change.
The massive grassroots opposition to the Kinder Morgan and Spectra pipelines shows that ordinary citizens know what is best for our state. Now, it is time for our elected officials to listen. We need to invest in energy solutions that work - not the easy answers offered by the fossil fuel industry.