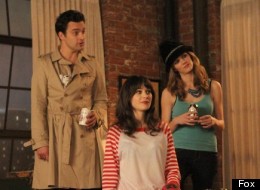 Note: Do not read on unless you've seen the January 29th episode of Fox's "New Girl," titled "Cooler."

Given that there was some Twitter chatter about this episode, and given that Fox was promoting this week's installment more actively than normal -- the episode was posted on the network's media website a couple of days early and there was a press conference call with creator Liz Meriwether -- it was not hard to figure out what was up with "Cooler." (Note: If I get the transcript of the Meriwether conference call, I'll update this post with relevant excerpts.)

So even before I watched the episode, I knew we'd see a return of True American -- the most confusing yet patriotic drinking game of all time -- and I was aware there would be a "big moment" for Jess and Nick. It wasn't hard to guess what that would be.

One of my favorite things about the episode was how it subverted all those expectations, yet acknowledged the complexity of Jess and Nick's relationship and also supplied a pretty great kiss.

The whole situation made me think about the early days of "The Office" and Jim and Pam's first kiss, which is one of the most romantic moments in recent TV history. In that case, the kiss really was unexpected (I recall scurrying to the Internet as fast as I could to celebrate the joyous moment with my fellow fans), and based on the groundwork that had been laid by the show, it was an incredibly effective moment. We wanted Jim to act on his deep feelings, and we knew that on some level, Pam was ready for that and wanted it too. It was a kiss that came at the right moment for the characters and the show.

The "New Girl" situation isn't completely analogous to where "The Office" and Jim and Pam were several years ago, but I thought the Fox comedy handled the Nick-Jess moment well. As was the case with "The Office," the kiss felt appropriate to the this world and these people.

Unlike the characters on "The Office," the loft roommates are still trying to figure themselves out, certainly in a professional sense, at the very least. Schmidt is the only one who really has a full-on career that he's doing well in. The others are floundering in their personal and professional lives -- sometimes doing all right in both arenas, but often just getting by and/or making dumb choices. Actually, the one couple that did have a stable (if weird) relationship -- Cece and Schmidt -- both have decent incomes, but both tend to make terrible romantic choices.

So to one degree or another, they're all well-meaning screwups who haven't really built fully adult lives yet. The kiss between Jess and Nick kind of reflects that.

The more I thought about it, the more I liked the timing of the kiss and the way it came about. We've known these characters for a season and a half, the Nick-Jess attraction and friendship is now one of the acknowledge lynchpins of the show, and it would be weird if the show -- and the loftmates -- continued to treat that attraction like it wasn't really there or that it was perfectly harmless and controllable.

These people don't often control anything in their lives -- why would the kiss be any different? They kind of fall into things and back into their futures, for good and ill. It makes sense that Nick and Jess would finally kiss at a weird moment after a lot of fighting and drinking and goofball camaraderie. They'd acknowledged the depth of their attraction when they were locked behind the Iron Curtain together; they have known for a long time that there is something between them. They almost acted on that then and there, but to kiss while everyone was shouting and clamoring for them to do so would cheapen their bond.

"Not like this," as Nick said, meaning he'd considered kissing her many times, and the conditions were far from ideal for what he had in mind.

I enjoyed the fact that the kiss was half-considered and half-not. Nick clearly planned it, but I doubt even he thought it would go that well. Jess could have pulled away from it, but she didn't. They now have to live with what happened, and the intensity of that kiss can't be denied by either party. If Jess was the cooler before, I expect several more instances of both Jess and Nick cooling each other's dates as the season continues.

Every other TV critic I respect hates, absolutely hates, the alleged "Moonlighting" curse -- the bullshit idea that if you get a couple together, the relationship will become boring and stale. Not only is that based on a completely inaccurate reading of what killed "Moonlighting," that TV trope (still beloved by so many hack writers) ignores the many, many instances of a couple that is solidly together creating even more opportunities for good storytelling: Sam and Diane on "Cheers," Jim and Pam on "The Office," the Taylors on "Friday Night Lights," Ben and Leslie on "Parks and Recreation," various Bravermans on "Parenthood," etc. Lazy writing kills shows, not main characters with a will-they-won't-they history getting together.

"New Girl" is a comedy that I want to run for many, many seasons -- I am greatly enjoying the second season and I laugh out loud during every episode. It is doing an ace job of mixing sharp comedic moments and goofball weirdness with excellent character-building (notice how every roommate had his or her own story in "Cooler," and they all built on each other and collided in fruitful ways).

Even if not every episode is on the level of the amazeballs "Eggs" ("I like to arrive at the bridge, meet the troll and then answer his riddles three"), most are quite good at the very least, and as long as the writing remains as strong as it's been, I look forward to seeing many questionable life choices in seasons to come. And ultimately, I don't think getting Jess and Nick together will be a problem at all. These people are still in the process of growing up, and as they do so, they're bound to keep on making a lot of amusing and painful mistakes, sometimes with each other. Those choices can be both hilarious and sad, and "New Girl" has gotten a lot of mileage out of both those areas.

And the thing is, just because they kissed, I don't think Nick and Jess are actually together, or will get together very soon. Maybe they will try to start dating soon, who knows. But I'd predict that the show's executive producers (whom I interviewed last fall) will want to give this development some time to percolate through the loft. Nick and Jess might well circle each other for a while and continue to become better and better friends -- and that will quite likely make the idea of dating even more scary. When you're that uncertain about the direction of your life, you're more likely to be afraid of upsetting the applecart and potentially losing a very good friend.

Who knows what the future holds? It's been a strong season for "New Girl" (aside from the product placement storyline with the car, oy vey), and my bond with the loft weirdos grows stronger every week. I've got no real reason to doubt that the show will fail to do fun things with Nick, Jess and the rest of the gang in the post-kiss era.