The Gmail, it is a changin'.

Google has announced even more new features on top of the new Gmail design that will closely integrate its email service with Google+, its fledgling social network.

In a post on the official Gmail blog titled "Gmail and Contacts get better with Google+," Engineering Director Mark Striebeck laid out the more advanced entanglement of Google+ and Gmail. For example, whenever you open an email, you will see the sender's most recent post to Google+ on the right sidebar and will have the option to add that person to your Google+ circles.

Another addition will be a drop-down menu beneath "Drafts" on the left sidebar, where you will be able to filter your mail by Circles, showing only mail from your Google+ contacts, such as the people in your "Family" Circle or your "College Buddies" Circle.

There will also be a new "Share" button next to all images sent over Gmail that will allow the recipient to quickly share that image on Google+.

Finally, for your contacts that maintain a Google+ profile, contact information (phone numbers, alternate email addresses, etc.) will be automatically updated within Gmail as it is updated on Google+.

It's been a wild, transformative month for Gmail, whose major visual redesign is rolling out and becoming permanent this month. The changes have been coolly received thus far, though the uproar hasn't been nearly as loud as it was when Google Reader launched its new design. The changes aren't done yet, either, as Google recently announced both cosmetic and functional changes to its ever-present floating black toolbar at the top of each page.

All of the changes are intended to drive more traffic and integrate more closely with Google+, which has seen a large number of signups but relatively little activity (when compared to Facebook) that journalist Dan Reimold described it as "worse than a ghost town" and Slate's Farhad Manjoo pronounced it dead in a column.

Nevertheless, Google is plowing on ahead with more advanced integration of its various services with its social network. Below, check out a few photos of the newest integrations, which will be hitting your inbox "over the next few days": 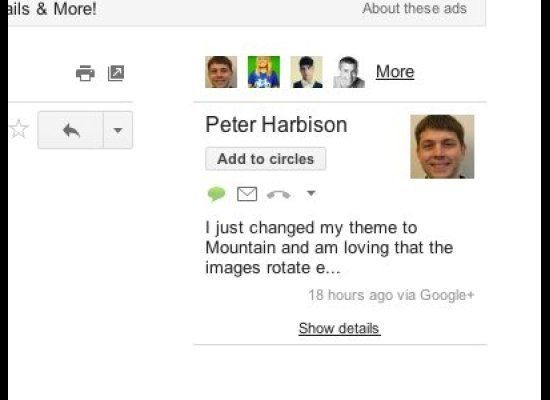