There are a lot of potential hats in the ring to be the 2016 Republican candidate, and two new state polls suggest that New Hampshire voters have not yet identified a clear frontrunner.

Eighty-one percent of voters say they could change their mind before the day of the election. Only 19 percent say they are firm in their decision.

While the poll shows that Bush has a slightly higher favorability rating than Walker -- 53 percent, compared to 48 percent -- he suffers from a higher unfavorable rating (37 percent) than Walker (16 percent) does. Bush is more widely recognized than Walker -- just 2 percent of respondents say they don't know who Bush is, while 22 percent say that they don't recognize Walker. This leaves Bush with less of an opportunity to win voters over in recognition and approval.

A Suffolk University poll conducted in New Hampshire between March 21 and 24, the same week as the Franklin Pierce-Boston Herald poll, finds Bush garnering support from 19 percent of respondents, followed by Walker at 14 percent.

HuffPost Pollster, which aggregates all publicly available polls on elections, also finds that the New Hampshire primary is shaping up to be competitive. According to these aggregated results, Bush has a slight lead (18 percent) over Walker (15 percent). 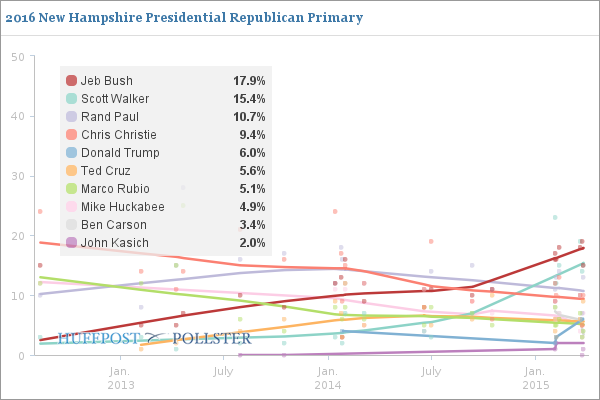 Nationally, a YouGov/Economist poll from earlier this month shows Walker leading with 19 percent while Bush follows with 14 percent. Based on aggregated national polls from HuffPost Pollster, however, Jeb Bush seems to have a larger lead (15 percent) over Walker (9 percent). 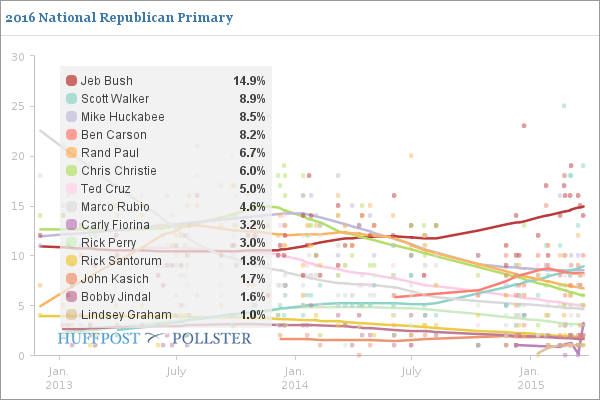