WASHINGTON -- The latest poll in New Hampshire shows little bounce for former Massachusetts Gov. Mitt Romney and a modest increase for former Sen. Rick Santorum, but Romney continues to hold a huge lead over the field, with Texas Rep. Ron Paul running second and Santorum still a distant third. The coming glut of polling over the next few days will likely show further shifts, but both history and Romney's strong base of support suggest that dramatic changes are unlikely.

These results are part of Suffolk's ongoing, daily tracking poll, with the latest numbers based on 500 phone interviews conducted on Tuesday and Wednesday night of this week. Vote returns from the Iowa caucuses were broadcast Tuesday night, showing Romney and Santorum in a near tie, though Romney's 8-vote edge was not reported until the wee hours on Wednesday morning.

Reflecting the attention given to both Santorum's late gains in Iowa and his near victory on Tuesday, the Suffolk poll shows Santorum's support increasing each day this week, more than doubling (from 3 to 8 percent) in five days. Thursday's numbers also show Romney's support ticking down since Wednesday (from 43 to 41 percent), although the change was not large enough to be statistically meaningful. Ron Paul's support jumped four percentage points (from 14 to 18 percent).

These results should not be confused with a different New Hampshire survey conducted by CNN and ORC International on Tuesday night showing that the Iowa Caucus results "changed few minds in New Hampshire," according to CNN's analysis. What some coverage of this poll leaves out is that it focused only on "Iowa caucus watchers," those who were at home watching the Iowa results on Tuesday night, and thus should not be considered representative of all of New Hampshire's likely Republican primary voters.

The survey re-interviewed 554 respondents who had been polled previously as part of CNN/ORC's late December poll of New Hampshire voters. Among caucus results viewers, Rick Santorum's support doubled, from 5 to 10 percent, but Romney's support remained the same at 47 percent. CNN's release also noted that Iowa caucus-watchers interviewed on Tuesday night were significantly older and more likely to be Tea Party supporters than all likely Republican primary voters.

Polls taken just before Iowa's caucuses showed Romney maintaining the wide lead in New Hampshire that he has held throughout the campaign. The HuffPost pollster polling chart, based on all available public polls, currently shows Romney at 41.3 percent, followed by Ron Paul at 19.6 percent. Support for Newt Gingrich has dropped significantly in New Hampshire, to 8.9 percent, as it has nationwide. 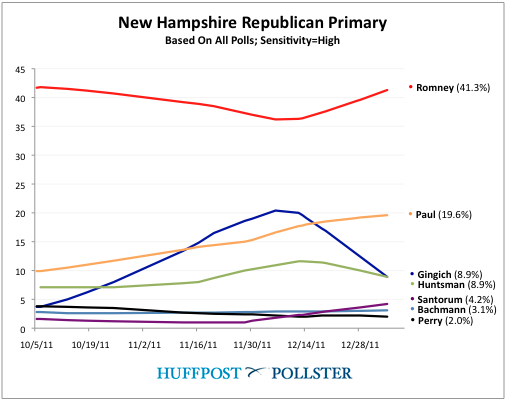 Santorum's support on the HuffPost polling chart was already trending up, from 1 percent in late November to about 4 percent just before the Iowa caucuses.

Keep in mind that, when candidates gain support following the Iowa causes, those changes are typically not immediate, but rather develop over the course of the week. As political scientist John Sides reports, candidates who beat expectations in Iowa (and New Hampshire) often receive greater attention from the news media, and that greater attention moves the polling numbers.

History suggests that Santorum, not Romney, stands to gain the most from the Iowa results, although a bump large enough to overtake Romney seems unlikely. So far, only Michele Bachmann has exited the race, and her support in New Hampshire has been at roughly 3 percent since October. Newt Gingrich and Rick Perry remain active candidates, although Gingrich has publicly praised Santorum, and Perry apparently plans to focus more on South Carolina than New Hampshire. But even if every Bachmann, Perry and Gingrich supporter switched to Santorum, his support in the Granite State would only total roughly 20 percent.

The New Hampshire primary has a history of dramatic shifts to candidates who beat expectations in the Iowa caucuses. In 1984, Gary Hart's distant but surprising second place finish behind Walter Mondale in Iowa helped him jump from 2 percent on a Gallup poll conducted just before Iowa to 37 percent of the vote and a 10-point victory a week later. In 2004, John Kerry's surprise win in Iowa helped him surge from 24 to 37 percent in polling conducted by the University of New Hampshire in the week between Iowa and the New Hampshire primary (Kerry won with 38 percent of the vote).

But in both examples, the political environment was primed for the surges by Hart and Kerry. Mondale had been pummeled by negative advertising (run by a third candidate, John Glenn) in the weeks before Hart's Iowa surprise. As a Massachusetts senator, Kerry was well known in neighboring New Hampshire and had previously led in polls there before Howard Dean's temporary surge.

This year, Romney is the regional favorite and has not been the subject of the sort of attacks that hurt Mondale in 1984, or for that matter, Romney in 2008. Moreover, as the Washington Post's Scott Clement reports, New Hampshire voters are more moderate than those in Iowa, and those who identify as conservative like Romney better.

That moderate streak is one reason why, four years ago, Mike Huckabee saw only a modest bump in his New Hampshire support following his victory in the Iowa caucuses. The big beneficiary of declines by relatively moderate candidates like Romney and Rudy Giuliani was John McCain, who surged to victory in the final weeks. 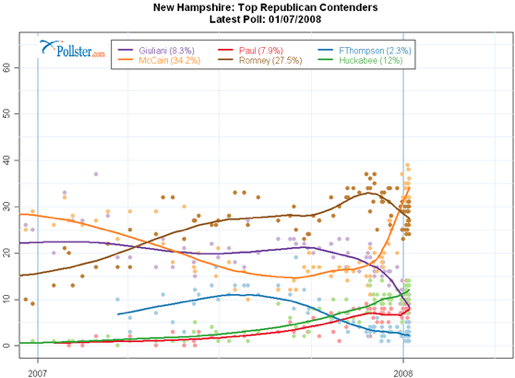 Of course, those following the New Hampshire polls this week should remember Barack Obama's dramatic surge four years ago following his surprise Iowa victory. Obama's support did increase -- his 36 percent of the vote was close to the final polling averages and represented a significant gain over his New Hampshire support a week earlier -- but polls significantly understated support for Hillary Clinton (who won with 39 percent).

The result was one of the best known polling miscues in recent history and fair warning to be cautious about assuming too much about what the polls tell us this week.