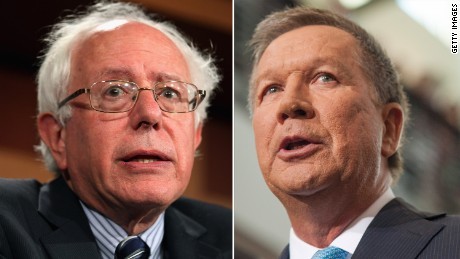 (The first few votes in New Hampshire were kind to Bernie Sanders and John Kasich -- who says he'll support Sanders for "president of Ben and Jerry's.")

A woman who announced at a town hall meeting in New Hampshire that she is weighing three candidates for president of the United States -- John Kasich, Hillary Clinton and Bernie Sanders -- encapsulated the power that voters hold in the vaunted first-in-the-nation primary election.

It's a power, and a responsibility.

In a year when bigotry, xenophobia and profanity have fueled the campaign of one party's front-runner -- an unofficial status conferred only by polling, and not yet affirmed in any actual voting -- the ability of New Hampshire's independent voters to choose either party's ballot offers a unique early opportunity for course-correction in a campaign that has careered off any reasonable person's concept of a good track.

If steady judgment is the preeminent qualification for any presidential candidate, this one cashed in all his chips this week when it took him precisely 10 seconds to decide whether to repeat, in front of television cameras on stage, the name that someone in his raucous rally audience offered for the rival who beat him in Iowa . And he voiced it gleefully: "Pussy."

For months now, reasonable people in both parties have been asking how far any candidate can push the boundaries of common decency in public parlance -- blanket condemnation of undocumented Mexican immigrants as "rapists... bringing drugs and crime", derision of a female debate moderator ("blood coming out of her... wherever"), questioning a former prisoner-of-war's heroism, mimicking a reporter's physical disability.

The optimists among us are counting on New Hampshire's famously independent-minded voters to fix this. The pessimists say they probably won't.

Yet they have the power, and the responsibility, to help redefine the contours of this contest going forward.

The two winners of today's primary have been predicted for some time now, Donald Trump and Sanders -- though Kasich notes that "God invented pollsters to make astrologers look more accurate." Still, New Hampshire's voters can put a wintry wind in the sails of a few reputable Republicans -- Ohio's Kasich and Florida's Marco Rubio and Jeb Bush -- enabling them to carry their campaigns south and west with some credibility and denying Trump the clear-cut victory on which his entire "I'm No. 1" campaign has been based. Or they could trip Trump hard, here and now, in the early rounds of the 2016 contests.

New Hampshire's independents gave that former prisoner-of-war his first national boost, in 2000. And John McCain's subsequent nomination for president in 2008 was built upon the support he found not only in the Granite State, but also in many other states that hold truly open primaries, allowing members of any party to take part in one party's election. Starting in South Carolina on Feb. 20, and again in several of the Southern states taking part in the so-called SEC primary on March 1, open primaries will again enable people to cross party lines in pursuit of reason.

(Remember, in stark contrast to Trump's exploitation of a vicious supporter, it was McCain who chided a woman in Minnesota who called Barack Obama an Arab. "No, ma'am,'' McCain said. "He's a decent family man [and] citizen that I just happen to have disagreements with on fundamental issues and that's what this campaign's all about. He's not [an Arab].")

(Update: One-third of the voters casting Republican ballots today were "undeclared" members of either party, the independents, according to exit-polling.)

This isn't to say that any of the Republicans who claim the hard-fought No 2 and No. 3 positions in today's primary are guaranteed success down the road.

We're not hearing a lot of long bets on the candidates celebrating those few first returns from tiny Dixville Notch, N.H. -- Kasich and Sanders.

Indeed, the self-styled independent-minded Kasich exposed a deeply partisan vein in his response to the woman in Windham, N.H., who told him she is considering Kasich, Clinton or Sanders. "I'm for Bernie being president of Ben and Jerry's," Kasich said. "I want them to give everyone free ice cream... Bernie's a socialist. That ain't gonna happen," he continued. "The problem with Hillary is this, 'What's the latest poll say, what's the latest focus group?'

We shouldn't run elections with polls either, certainly not the ones that have encouraged the basest instincts in American politics with a front-runner status which only thinking voters can revoke.