It's not unusual to find kinships to other artist's work when you first walk through an exhibition. I can't help think of the oddly self-aggrandizing aspects of the self-portrait paintings of Philip Guston when I look at Tending To the Night (2012), a figure in full recline enjoying an evening of smoking. There is a little something of the hauntingly majestic quality of Auguste Rodin's Balzac (1891) in Kaspar Remembered (2102) and Journey to the Other Side (2012), and even a bit of A. R. Penck's ragged playfulness in Untitled (2012), which is an roughly rendered arching male nude in red and black. 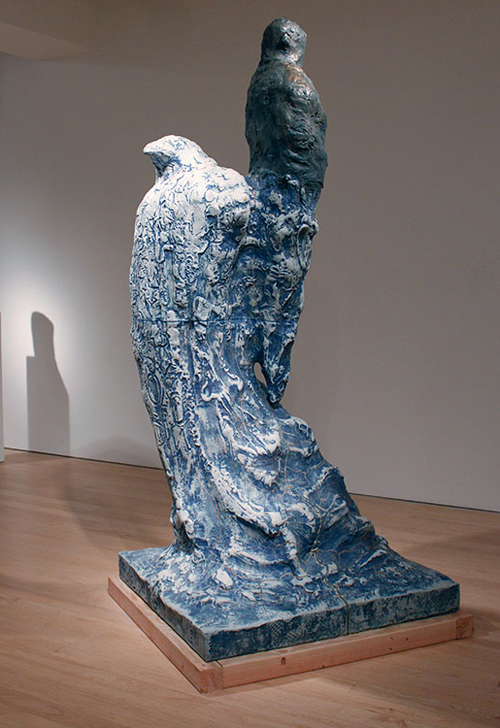 However, what is most notable about the art of Lerman is the way in which he incorporates an element of humanity into the texture and surfaces of the glazed terracotta he employs. Perhaps it is the playfulness of the figures, or the earthy textures he achieves that spawns an immediate connection to the qualities of his work. Even with the more difficult poses such as Foot in the Air (2012), where a twisted male figure holds five cigarettes at one time - an absurd circumstance to say the least - there is innocence to the subject, making it attractive, even loveable. 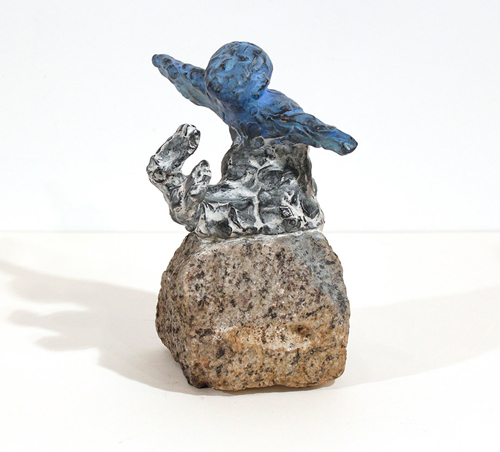 Maquette for The Swallow is His Bride (2011), painted terracotta and granite
9 1/4 x 7 x 5 inches, courtesy of McKee Gallery

Playfulness is even more apparent in Maquette for The Swallow is His Bride (2011) and Dreams (2012) where hopeful attempts at flight fill the air. I also can't help but think of the hill towns in central Italy, i.e. Civita di Bagnoregio, when looking at Siege (2012) or Legends of Montecastello (2012). And it is those references that add just the right amount of comfort for the heart and mind of the viewer - that ability to capture the essence of a moment, an emotion, a favorable memory that we all carry with us that makes this work so compelling. 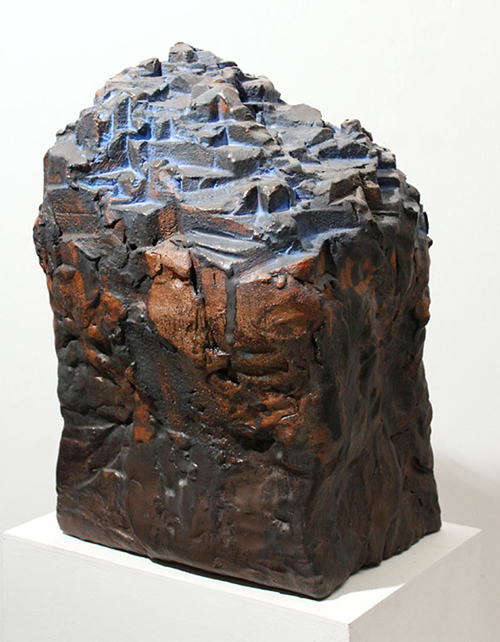 Lerman's more challenging sculptures such as The Blue Robe of Buddha (2012) and Dream Catcher (2012) contain elements of wood and metal in the post-firing stages of their creation. The subjects, which have the look of cooled molten lava or honeycombed mud, capture your attention by defying aesthetics. It's something like the way the CoBrA artists of the mid twentieth century, who were inspired by the honesty and immediacy of the art of children, worked their materials. That rawness, that indication of the touch of hands and fingers in the work, the joy of working with one's chosen materials - that same tangible presence of the artist is in this work. 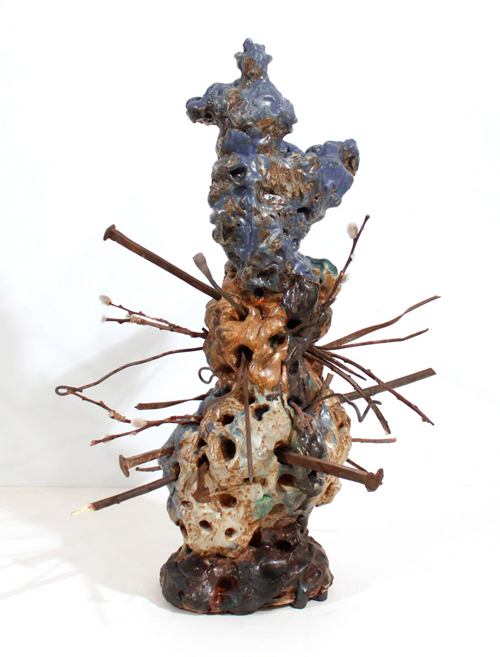 Lerman also offers a bit of theatrics with Messenger (2010-2012), Shadow Catcher (2012) and Temple (2012) taking the narrative beyond the references we carry with us, to a more concrete expression of a particular setting. Leonid Lerman, Playing with Fire: Terracottas is at the McKee Gallery on 5th Avenue in New York City through December 8th. It will reignite the wonder in you.