Have scientists discovered a new species of primitive human?

Two teams of researchers have been asking that very question after analyzing mysterious fossils found in China and Taiwan. The fossils don't seem to fit with any known hominin species--including modern humans, Homo erectus or Neanderthals. Instead, they may be the result of interbreeding between known species, or perhaps even belong to an unknown human species.

"Classically, everything that inhabited Asia before the arrival of modern humans have been classified into a single taxon: H. erectus," Dr. María Martinón-Torres, a dental anthropologist at Spain’s National Research Center on Human Evolution (CENIEH) and a researcher involved in one of the studies, told The Huffington Post in an email. "However, we now see that we may have put in the same box things that are different... It may be time to revise that." 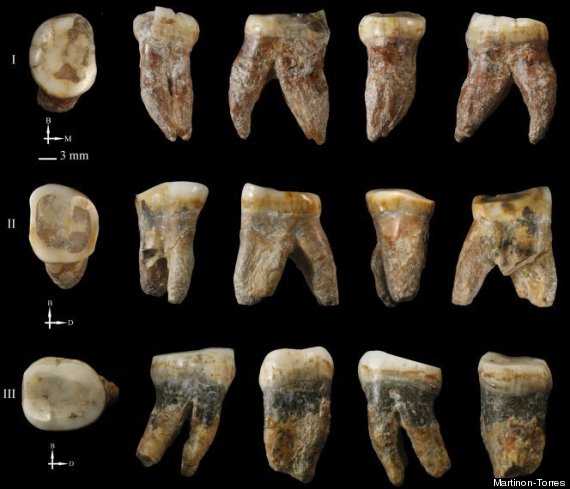 The nine teeth examined while studying fossils of unidentified hominins.

For the research, Martinón-Torres and her colleagues analyzed nine teeth from four individuals, which were unearthed in a cave at Northern China's Xujiayao site in 1976. The teeth, which date back 60,000 to 120,000 years, were compared to more than 5,000 dental samples taken from a variety of hominin species.

The researchers looked at the teeths' features such as grooves and cusps, the size of the crown and root system, and their positions relative to one another, BBC reported.

What did the researchers find? Though the nine teeth shared some isolated features with Neanderthals, they did not match completely with any of the samples included in the study.

"What we have seen is an unknown group for us," Martinón-Torres told BBC. "It's not H. sapiens and it's not H. neanderthalensis. They have a mixture of something very primitive, which is currently unknown. We cannot go further to say it's a new species because we need to compare it to other things."

The study has been published in the February issue of the American Journal of Physical Anthropology.

A separate, unrelated study published this week hints at the possibility of yet another new primitive human species that may have lived in prehistoric Asia. A team of researchers in Japan, Taiwan and Australia examined the lower, right jaw of a hominin found in the Penghu submarine channel off the western coast of Taiwan. The fossil, dubbed Penghu 1, dates back 10,000 to 190,000 years.

Again, when the fossil was compared to samples from a variety of hominin species, including Neanderthals, Homo sapiens and Homo habilis, it didn't completely match with any of them. The findings of this study were published online in the journal Nature Communications on Jan. 27, 2015.

Whatever or not the fossils end up belonging to a new species, they're painting a radically new picture of human evolution in Asia, the researchers say. They suggest that before modern humans arrived in Asia around 50,000 to 40,000 years ago, a much more diverse group of ancient hominins lived there than previously thought.

"We need other skeletal parts to evaluate the degree of its uniqueness,"study co-author Dr. Yousuke Kaifu, a paleoanthropologist at Japan's National Museum of Nature and Science in Tokyo, told Live Science. "The question of species can be effectively discussed after those steps."