What does a young star look like? Turns out, it resembles an intergalactic Eye of Sauron. At first, anyway.

A new set of before-and-after renderings released by the National Radio Astronomy Observatory show a massive star forming 4,200 light years away. The star, W75N(B)-VLA 2, is eight times larger than our sun and is believed to be just a few thousand years old. The new images capture it during a critical stage of development.

The rendering below on the left shows the star when it was first observed in 1996 by National Science Foundation's Karl G. Jansky Very Large Array, a radio astronomy observatory in New Mexico, while the one on the right shows it last year.

The dusty ring around the star is called the torus.

The star shoots out hot ionized winds for several years at a time, which at first move outward in all directions and form a shell-like sphere around the star, as seen in the first image, according to the NRAO.

Once those winds hit the torus, they slow and expand along the poles instead -- or, from this perspective, upward and downward -- causing the elongated shape seen in the second image.

"In the span of only 18 years, we've seen exactly what we predicted," Carlos Carrasco-Gonzalez of the Center of Radioastronomy and Astrophysics of the National Autonomous University of Mexico said in a news release.

The findings, which researchers said help show how larger stars develop in real time, were published in the April issue of the journal Science. Researchers say they are planning to continue watching W75N(B)-VLA 2 in the coming years.

New Images Show A Star Being Formed 4,200 Light Years Away
Wonders Of Astronomy 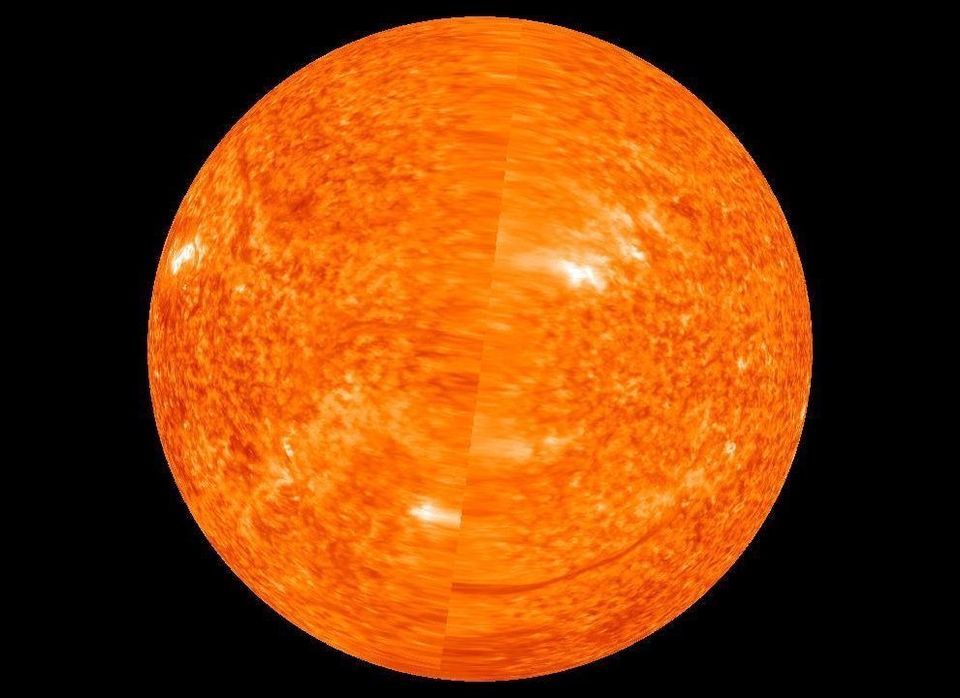 1 / 13
Entire Sun Imaged
In February, <a href="http://www.nasa.gov/mission_pages/stereo/main/index.html" target="_hplink">NASA's STEREO probes</a>, two observatories that were launched in 2006 to survey the sun, reached opposite ends of the sun and thus, were able to give scientists (and the rest of us!) a never-before-seen view of the far side of the star at the center of our solar system. The composite image above was captured on June 1, 2011, <a href="http://www.nasa.gov/mission_pages/stereo/news/farside-060111.html" target="_hplink">and according to NASA</a>, "is the first complete image of the solar far side, the half of the sun invisible from Earth." <a href="https://www.huffpost.com/entry/nasa-stereo-sun-images-video_n_819510" target="_hplink">Click here for more</a> on the STEREO probes.
NASA/STEREO