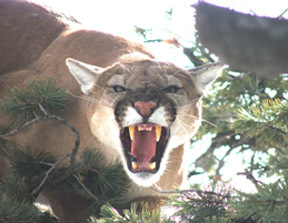 (Jackson, WY) - In the science of describing cat behavior -- or any wildlife species for that matter -- a compelling question is, how connected are individuals to each other? Or, how do they communicate with their neighbors, and how do these communications and interactions drive cat society? Intensive field research and observation can bring some important insights, and sometimes, some new questions.

In the early morning of a cold November day in northwestern Wyoming, a female cougar, known as F1 to researchers, crossed a road in the remote Gros Ventre River Valley. A hunter encountered her tracks and pursued her. Before the end of the day, F1 was dead, part of the legal take of the winter hunting season.

In the wake of her removal, her three kittens were left without the care of their mother for the oncoming winter. Technically, under state statutes, these young were not "orphans" because they were more than a year old. In fact, they were fourteen months old. But, in Wyoming, as much of North America, cougar kittens will stay with their mother for nearly twenty months, learning how to make it on their own, and progressively becoming more independent, and finally leaving, or dispersing, from their mother. These three kittens, two males and a female, would provide us with a new view -- a new window -- into cat society.

We were tracking this cougar family as part of a long-term research project, the Teton Cougar Project, a partnership between Panthera and Craighead Beringia South. The loss of F1, and the suddenly independent kittens, intensified our field efforts to an even higher level, taking us into the Gros Ventre every day to see what the fate of these three kittens would be. Though there was talk of capturing them and "saving them", this would be illegal under our state research permit, and since they were now considered independent according to state statutes, we were motivated to document this event as thoroughly as possible.

To our amazement, on the sixth day after the death of their mother, the three kittens -- all of which were wearing radio-collars that told us where they were -- were located on an elk kill about a mile down the valley; a kill made by a neighboring adult female cougar, F27. This would have been unusual enough, and we were amazed that these kittens were allowed to this kill by F27, sharing the meal for several days.

Question after question arose about it: how did they know she was there?...did F1 and F27 already know each other prior to F1's death?...Why would F27 share a meal with these young cougars? But even more amazing was the fact that this five-year-old female cougar (pictured above), had two kittens of her own! And, they were only 5 months old, weighing less than 25 pounds. This meant that five cougars were sharing a kill made by F27: the adult female, two young kittens of F27, and three large kittens, the offspring of F1. As researchers, we knew we now had something totally new in our understanding of cougar social organization.

F27, an adult female, about 90 pounds, caring for two young kittens, had allowed three large (orphaned) kitten cougars to share a kill. And the orphaned male offspring of F1 would be almost as large as F27 at this point. One of F27's strongest motivations in the situation should have been to protect her young, who are very vulnerable at this age, from all male cougars in the area. Our daily tracking of the family became even more intense.

For the next four months, we found this "blended" cougar family together more than apart. And, as far as we could determine, F27 was making the kills to feed the family, still allowing these new neighbors to "mooch" off of her and her family. One additional odd finding in all of this was that -- through our intensive radio-tracking -- we documented that the "orphaned" female kitten was the most independent of the bunch, sometimes going off upstream for more than a week, and making kills on her own. All the while, her brothers continued to live and dine with their adopted mom, and her kittens.

Last spring, the three orphans went through the normal process of dispersal, leaving F27 (and their "step brother and sister"), and moving off to find their own places to live and breed, far from the neighborhood where they grew up. F27 had proven herself as a super-mom, and the research team has proven that this "solitary carnivore" was anything but.

Sometime this year, we'll run the genetics on F1 and F27 to see if they're related. Our current and most popular bet among the research crew is that F1 is F27's mother, since she was nearly eight years her senior. This would mean that F27 had grown up, dispersed, and set up a territory right next to her mother, not uncommon in cougar society. Then, while raising her own family, her mother, and neighbor, disappeared, and she picked up three extra mouths to feed. By doing so, she not only assisted her mother in the unfinished business of raising her young, but she would also pass on her own genes, because these orphans would be her half-siblings.

Howard Quigley is the Director of Western Hemisphere Felid Programs at Panthera, focusing on jaguars and cougars. He obtained his bachelor's degree from the University of California at Berkeley, his master's degree from the University of Tennessee, and his doctorate from the University of Idaho. His work with carnivores has included field studies of cougars in central Idaho, giant pandas in China, jaguars in the Brazilian Pantanal, and Siberian tigers in the Russian Far East. His current cougar field project, the Teton Cougar Project, in the southern Yellowstone ecosystem, focuses on predator-prey interactions, cougar population dynamics, and cougar interactions with other large carnivores. In his current work with Panthera, Howard is also conducting a review and evaluation of cougar science and conservation efforts in the state of California. He is a member of the I.U.C.N. Cat Specialist Group and consults on a variety of carnivore issues, including jaguar recovery in the U.S., cougar-human interactions, and jaguar-rancher conflicts in Latin America. Dr. Quigley serves on graduate committees at five universities and has assisted in the completion of more than twenty graduate students through his graduate committee activities. He is also the author of more than thirty scientific publications and popular articles.