Unlike Iran, which last Friday celebrated its annual National Nuclear Day, Israel tends not to rattle a new saber, at least until unsheathing it for use in battle. Take the Scout, essentially the Model T of the current generation of unmanned aerial vehicles (UAVs, a.k.a. drones). The system was utterly unheard of outside Israel until its debut during the 1982 Lebanon War, when it rendered Syria's air defenses helpless.

Yet this February 21, less than two weeks after Iran announced its highly enriched uranium plans, the Israeli Air Force staged a ceremony in honor of the "operational acceptance" of new Heron TP (known internally as the Eitan) UAVs. The Israelis might ordinarily have marked a transaction such as operational acceptance with no more pomp and circumstance than a signature and a nice pen.

It's reasonable to assume that the ceremony's intended audience was a thousand miles away, undertaking preparations for National Nuclear Day.

Here's what they learned: The Heron is 43 feet long with a wingspan of 85 feet, or about that of a Boeing 737. Its range is an astounding 5,000 miles (or deep into Iran and back twice). Its weapons payload can be 4,000 pounds, nearly the weight of America's much-ballyhooed Reaper UAV. Even more formidable are the Heron's capabilities for intelligence, reconnaissance and surveillance, for instance hovering nine or ten miles above a target -- as long as sixty hours on a tank of fuel -- and pointing the way for manned bombers. The system can also jam enemy communications. And it's fitted with sensors and cameras that, among other things, allow their operators to read a name badge 40,000 feet below, at night. Perhaps of greatest interest to the Iranians were new features that the Israeli Air Force neglected to mention.

The Iranians' reaction to the ceremony? Little more than shrugs of indifference.

Kenneth Katzman, a senior Middle Eastern Affairs analyst for the Congressional Research Service, saw it differently. "They were nervous about it," he told me. "It's widely assumed that Israel now knows reasonably well where the silos and nuclear sites are. Iran will have taken the Heron ceremony as indication that Israel is up for a strike, and that the United States supports it."

The nuclear summit did little to calm the Iranians.

"The amount of international criticism has gotten them more nervous," Katzman says. "China and Russia have now joined in. In Iran's mind, Israel might view these developments as a go-ahead to strike."

It remains to be seen to what extent the threat influences Tehran, but it certainly won't help a regime facing unprecedented pressure and opposition internally. Heron propaganda videos (like this one) have hit the YouTubes of the world at a time when garden-variety drones have achieved quasi-mythic status in the Middle East. As al Qaeda members have been lamenting lately: Step out of your house, you risk being blown up by a Predator; Stay inside, your house gets blown up too.

The new Heron may be the last thing Iran wants hanging over its head. 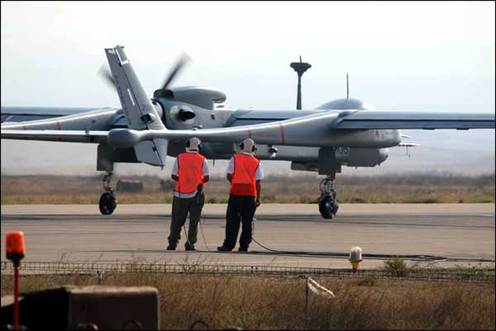 The Heron TP; photo from Israel Aerospace Industries, its manufacturer
Download
Calling all HuffPost superfans!
Sign up for membership to become a founding member and help shape HuffPost's next chapter
Join HuffPost