Santos Cruz still remembers the first time he heard the demolition crews. "They came without any warning at 6 a.m. outside my home," he said in a recent interview with The Huffington Post. "The ground started shaking and there was a tremendous amount of noise. They knocked down all the houses they owned: It was like being in a war zone for a whole month." Cruz, 49, has lived in Mount Holly Gardens, N.J., for 23 years. Now, the local government wants him out.

The clash between the township of Mount Holly and the working-class, mostly minority residents of this neighborhood of rowhouses has dragged on for 10 years. The township wants to give the land to a private developer. The residents want to remain in the homes they've owned for decades. And the prospect of an ending to the dispute has just gone a little further out of sight. In June, the township filed a Supreme Court petition to request a hearing on the decade-long redevelopment case. At stake are not only the legal implications of the Fair Housing Act, but also the fate of a township strapped for cash, residents uncertain about where they'll live and a neighborhood that has literally been torn apart by the local government.

Mount Holly Gardens, which lies just outside of Philadelphia, was built in the 1950s to house veterans returning from World War II and their families. It grew to be a close-knit community, but faced the common working-class neighborhood problems of crime, absentee landlords and poor maintenance. Minorities made up 75 percent of the development by 2000, and the typical resident lived on a low income. In 2002, Mount Holly Township declared the 30-acre development "blighted," and began negotiations to purchase the rowhomes. The government planned to sell the land to a private developer in Philadelphia to build 228 apartments and 292 townhomes. There were 329 working-class homes prior to the plan. If it's completed, 56 units in the new complex will be reserved for low-income housing. Many residents won't be able to afford the new townhouses or apartments. So those who didn't want to relocate filed a lawsuit soon afterwards in 2002.

Beginning in 2008, Mount Holly engaged in increasingly harsh tactics to encourage the holdout residents to leave. The township ripped up hunks of sidewalks, then left them unrepaired; it issued a round of warnings for trifling code violations; it cut off electricity to neighborhood street lights at night; it shut down a playground and a community center; and it reduced public services like policing, trash collection, transportation and school busing. But the demolitions hit residents hardest. The township has been tearing down rowhomes that still have occupants living in the homes connected to them. When bulldozers rip away individual houses, adjacent homes suffer collateral damage. There are holes in walls of the remaining homes, as well as a loss of insulation.

"Demolition would happen especially before holidays," Cruz says. "They'd do their work before Labor Day, Memorial Day, and Christmas Eve, and then leave the bulldozers out and about over the holidays, just to intimidate you."

The Gardens has the highest concentration of African-Americans and Latinos in Mount Holly. Alleging discrimination, the residents argue that the township's actions violate Title VIII of the Civil Rights Act, more commonly known as the "Fair Housing Act." While lower courts and the federal District Court have ruled in favor of the township, last September the 3rd U.S. Circuit Court of Appeals gave a partial victory to the residents. The ruling emphasized that although there may not have been intentional discrimination, there was sufficient statistical evidence to suggest a disparate impact on minorities, and that lower courts should have allowed the residents to pursue that claim.

About 60 to 70 homes in the Gardens are still occupied. Olga Pomar of South Jersey Legal Services represents around 25 of the residents. "My clients have shared with me their anxiety, stress, grief and frustration caused by the threatened loss of their homes, and from watching the destruction of their community," Pomar writes in an email. "They have lived for ten years with the threat their home will be forcibly taken from them. Many of the residents feel that the Township has created these increasingly unlivable conditions to give residents the sense that it is hopeless to stay and to pressure them to sell for a low price and leave."

Residents say the township isn't offering nearly enough money for them to relocate. "Even though the amount of relocation assistance Township provided was higher than the amount required by law, the total amount of compensation and relocation it was offering was grossly inadequate in most cases to allow residents to either remain in the community or to buy another comparable home in a neighborhood of their choice," Pomar says. Initially, the township offered from $32,000 for a one-bedroom home to $49,000 for a three-bedroom home, with an additional state-mandated $15,000 for relocation as well as a no-interest loan.

But uncertainty hangs over the heads of the residents who remain. They now live in a torn-up neighborhood threatened by eminent domain without adequate public services. Which likely means they'll never be able to sell their homes, either.

In an interview with HuffPost, James Maley Jr., redevelopment counsel for Mount Holly, insisted that the township has been helping the neighborhood. He compares its efforts to that of a social worker. Maley points out that a federal district judge ruled that the township has gone beyond what it is required to provide for the residents by law. "We've taken steps to adequately take care of people's needs in a very difficult time," Maley says. "We know that for everyone individually this is not the best of times. But we also believe that most of the people who have relocated are in a better place."

The legal fight has been costly for the township's taxpayers, too. Mount Holly is now more than $18 million in debt for a project that has yet to begin. Service on the debt alone costs the township another $1 million each year. Then there are the legal fees. Since the beginning of the litigation, Maley has received just under $940,000 from Mount Holly. Earlier this year, the township manager Kathy Hoffman asked to end litigation and the redevelopment plan because the township had nearly run out of the money it bonded for the project. The Supreme Court petition, requesting a hearing on the redevelopment case, came as a surprise, then, for the residents. Their initial relocation offer is now off the table, because the township has used up all its funds.

Hoffman, the township manager, directed HuffPost to Maley, and subsequent calls and emails to the township were not returned.

This is a municipality that last year contemplated laying off eight out of 22 police officers to bridge a budget gap. The township had hoped to make revenue from the land sale with the private developer, Keating Urban Partners, by now. That hasn't happened. In fact, instead of paying the township for the land, Keating has been collecting fees from it. In an unusual arrangement, Keating has free rein to handle some of the demolition while the township takes care of the costs. Documents obtained through an Open Public Records Act request by former resident Kent Pipes indicate that the township has made over $1.2 million in payments to Keating, largely as reimbursement for the demolitions and relocations. One line item, for example, shows that on Feb. 2, 2009, the township paid Keating $166,876 to demolish 31 units.

Even if the redevelopment plan is completed, it's far from clear that it will generate net revenue for Mount Holly. A report from the Institute for Justice, a libertarian public-interest law firm, predicts that because of the slumping housing market conditions and the increased cost of providing public services, Mount Holly will actually lose money each year. The Institute for Justice's Christina Walsh, who ran a billboard campaign on behalf of the Gardens' residents and who previously wrote on the Gardens for HuffPost, says: "The township has completely destroyed the Gardens and destroyed these people's lives. And for what? A project that may have resulted in a loss to taxpayers of more than $1 million a year."

Cruz still can't shake the shock of that first day of demolition. "My dog was hiding under the bed whole time because the house was shaking," he says. "A bulldozer hit my house when it was demolishing a neighboring one. The blow cracked the roof and detached the stairs from the walls. I had to stay on the roof for over four days for repairs because it was winter, and leaking."

He continues, "The flashing of one side of my house was also damaged after the house beside mine was torn down, and I can't fix it." All he got for his troubles was a code citation for unrepaired flashing.

Both parties expect the Supreme Court to decide in September if it will hear the case. 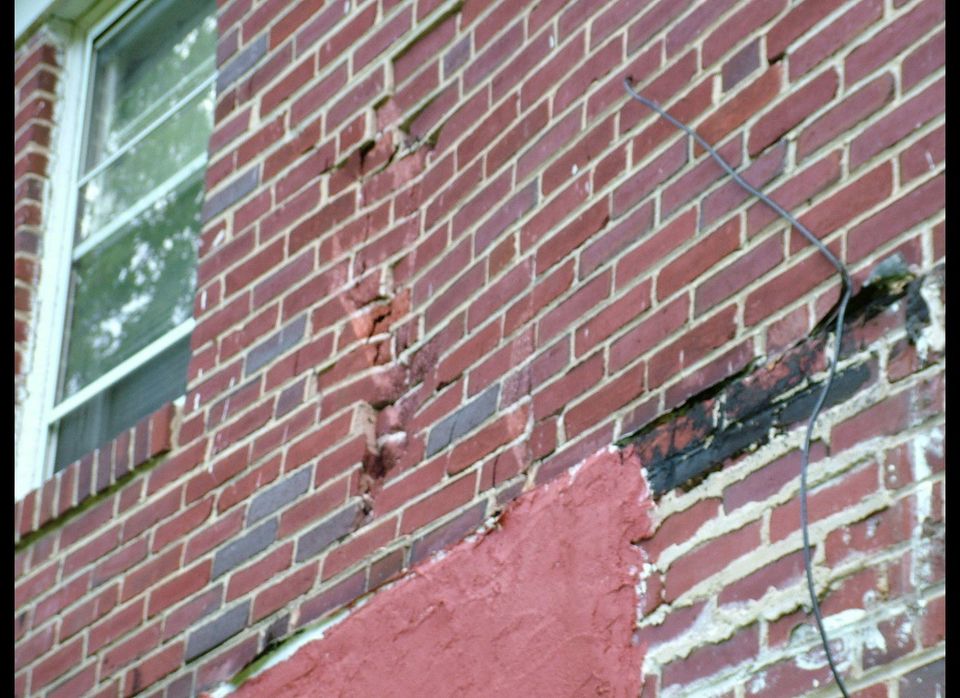 1 / 9
Damaged Walls
The late-Vivian Brooks, a longtime Gardens resident, testified at a 2008 public forum about her first experience with bulldozers. “The people that the township hired hit my house with their bulldozer, [which] shifted my roof, cracked my walls, and loosened the beams. The day the bulldozer hit the house, my great-granddaughter was living with me and she was sitting on the bed. The bulldozer hit the side of the house she was sitting [on] and she could actually put her hand where the wall crashed and pushed in. She had sheet rock all in her hair when the ceiling fell.”