On August 28, 2012, Chinese Air Force Colonel Dai Xu wrote a commentary for the Chinese-language edition of the Communist Party's Global Times. It read, in part:

Since we have decided that the US is bluffing in the East China Sea, we should take this opportunity to respond to these empty provocations with something real. This includes Vietnam, the Philippines and Japan, who are the three running dogs of the United States in Asia. We only need to kill one, and it will immediately bring the others to heel.

The Colonel was not reprimanded for his inciting comments. Rather, he is just one of a growing chorus of increasingly aggressive, and outspoken, Chinese military leaders. Rear Admiral Zhang Zhaozhong has said that the US would "run like a rabbit" if China went to war with Japan over the Diaoyu Islands, and that Chinese naval superiority is so great, "If there is a clash in the South China Sea, the possibility that foreign countries would intervene is low, and any conflict would not last long."

That bark is backed by a growing bite. Since 2002, when Hu came to power, China has been very focused on developing high tech and military technologies, including a blue water navy. Given the comparative financial crisis in the West, the technical losses due to cyber theft, and China's focus, it is possible that, in a decade or so, China may be equal to the US in advanced technologies, thereafter even pulling ahead.

China's calculus seems to assume that the US will not actively deploy in region. And it is testing that conclusion -- in particular by pushing harder and deeper in the South China Sea and with Japan. If China is proved right, it can lead China to extremely destabilizing unilateral action. If it is wrong, China will find out only once the US does engage, meaning an active conflict in the region. Either outcome, or just the persistent insecurity, is bad, to say the least.

One way to undermine Chinese strategic calculus, and to ensure peace, is to build up a credible regional deterrent. Korea, Singapore and Japan have advanced (though small compared to China) navies and, if they work together, can start to head in that direction.

Additionally, the US could offer 'lend lease' agreements to other, less militarily advanced nations that are persistently targeted by China, in particular Vietnam, Philippines and India. Lend lease means transferring surplus or obsolete US military equipment to friendly nations to help distribute the burden of keeping the peace. During WWII, the US supplied the UK and the Soviet Union with surplus military equipment, helping the UK challenge the Nazis at sea and helping the Soviet Unoin challenges the Nazis on land.

During WWII, lend lease did not prevent a war, but it helped to win a war. This new lend lease option is intended to prevent a war. Currently, the Vietnamese, Filipino and Indian navies are not strong enough to ensure freedom of the seas in the Indo-Pacific against all comers, and they don't have the economic capacity to immediately create that capability by themselves. Meanwhile, Vietnam and the Philippines are clearly being targeted by China, as noted above, and India is similarly being challenged by China along its land border, and encircled by Chinese bases in the Indian Ocean.

The idea would be to lend the necessary equipment, including aircraft carriers, air craft, warships, and artillery for 15 year on a token payment. The life of the carrier Kitty Hawk, for example, could have been extended 15 years through lend lease. The equipment would be relatively easily integrated into national militaries as, for example, the Indian navy is already used to operating with equipment which would be deemed obsolete by more high tech militaries. 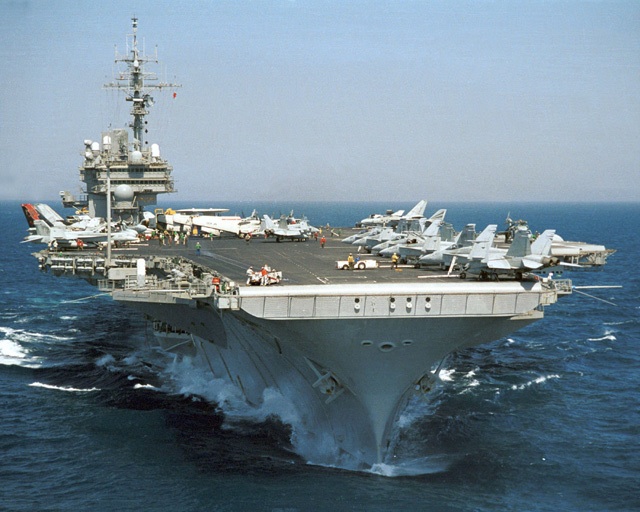 The Kitty Hawk could be making Chinese hawks rethink their strategies, were it not in retirement

If war is prevented by changing the calculus to make it much, much, more costly to China, and regional security is assured, then during those fifteen years the local economies can develop, making them then capable of securing more contemporary equipment, likely from proven compatible allies. In many ways, strong, secure economies in the Indo-Pacific are good for the US.

This idea has been proposed before, in particular by Prof MD Nalapat. In early 2001, Nalapat conceptualized the idea of an Asian NATO that would include the US, Canada, India, Singapore, Japan, Australia, and South Korea. China was not amused. There was a lot of negative coverage in the Chinese press, and the relevant countries went silent on any kind of overt military relationship between themselves out of fear of China. The idea included a lend lease component. At the Pentagon, a pro-Pakistan lobby shot that component down.

The US got quiet on the Asian NATO idea but, very quietly, the US also encouraged India to develop relations with Australia on one hand, and Japan on the other. Under President George W. Bush, the US also quietly began to expand its military-to-military cooperation with India so that, today, India has more exercise with the US military than with any other.

At the same time, Bush nudged Australia and Japan into developing strategic ties with India. Canberra was first, by around 2005, with Tokyo following around 2007. This potential for cooperation was shown in the 'tsunami coalition', during which the US, India, Japan and Australia jointly provided tsunami relief and facilitation to affected countries. This raised eyebrows because it excluded China, the largest country in the region, from participation. Since then, ties have continued to grow, quietly.

While Asian NATO may be in flux, it seems that now is the time to revive at least the lend lease component with key US partners. However, according to the originator of the concept, Prof Nalapat, there are still pockets of resistance:

In India, some senior naval officers were against lend lease as they were worried it would affect negotiations for the Gorshkov [Russian aircraft carrier], in which a huge amount of monies will be paid out. Where that money will go is opaque.

Also, while lend lease would create prosperity and good will for US, Europeans may not like it. Europeans seek to re-enter Asia, so they want NATO to handle security in the region. However, that is not going to fly. It has to be local navies. The US has to deal directly with Asian countries, without the Europeans. Truman and Eisenhower made the mistake of supporting the French, not the Vietnamese people. Roosevelt supported the Vietnamese people. The US should not make the mistake again of siding with Europeans in Asia. It should side with Asians in Asia, and with Europeans in Europe. Lend lease can do immense good by securing critical US interests in Asia in these crucial next 15 years when an effective deterrent can prevent a war.