At one of its characteristically glitzy media events on Tuesday, Apple announced a new laptop: a 13-inch MacBook Pro with Retina display.

The new laptop is a smaller version of the company's 15-inch Retina MacBook Pro, which launched in June.

The 13-inch Pro features a screen resolution of 2,560 by 1,600 pixels, which is four times higher than the previous 13-inch MacBook Pro.

"Everything on it is absolutely gorgeous," Phil Schiller, Apple's senior vice president of worldwide marketing, said announcing the new computer, according to Engadget's liveblog.

At 3.5 pounds and 0.75 inches thick, the new computer is 20 percent thinner and a pound lighter than its predecessor, making it the lightest MacBook ever, Schiller said.

"I think the most exciting part about this computer is what you can't see," Schiller said. "It's on the inside."

According to Engadget's live blog, the computer is available with up to 768GB of flash storage, 8GB of RAM, Core i5 or i7 Ivy Bridge chips, 802.11n WiFi and Bluetooth 4.

The new MacBook Pro retails for $1,699 and begins shipping on Tuesday.

You can follow along as this event unfolds live by visiting the live blog of our sister site, Engadget. You can also watch the announcements on Apple's website (here), as long as you have an Apple device with Safari 4 (or later). Your device must also run Mac OS X v10.6 or iOS 4.2 or later. 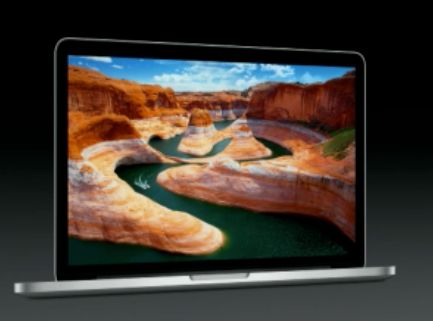