The proliferation of media voices and sources enabled by the internet has allowed a more nuanced and less gangster voice of young black America to emerge, untempered by market concerns and sensationalism.

Because of new media's democratized communication tools, we are now seeing a more accurate depiction of black America. Mainly because that media is actually being created by, ahem, black people. -- Raafi Rivero, Black Nerds

The new media space that Raafi describes has fostered a rise of black skaters, black rockers, black gamers and a wildly new successful strain of nerdy hip-hop (Kanye West, Gnarls Barkley, N.E.R.D.). These diverse depictions + distributions of black life run counter to what we most often see in mass media.

And that's one case study.

Many other minority groups within America have used new media to this effect -- GLBT, American-Muslims, Asian-Americans, etc... Increasingly more content is being made + moved by these groups, offsetting much of the prevailing content about these groups. Dialogue is supplanting monologue. As a society, we are all richer for it.

So. Is there an upside for marketers in this diversifying new media space?

This is a chance to better engage ignored minority markets.

Money is on the table.

My thinking is this:

1) Except for humor, advertising is historically a risk-adverse platform. When brands aim to reach minority markets, most opt to play it safe with the tropes that Blacks value 'soul', Latinos love 'family', Asians are 'sedulous', etc...

2) Using narrow clichés are not just an affront to millions of customers -- they are missed market opportunities. While brands may intuitively understand that a black guy can love both Jay-Z and The Beatles, this multiplicity is rarely seen within traditional advertising. Brands are attempting to engage minority consumers using too few points of narrative and emotional entry. 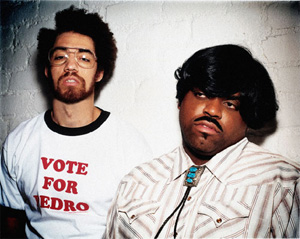 3) New media is the space where this consumer engagement strategy can begin to change. Why? Because new media is fueled by the simple truth of multiplicity. Within this space, one person can easily identify himself as: a gamer + a skater + a rocker + black + a man + a football fan + more. As wise brands believe this truth, they can rethink the narrow scope used to engage minority consumers.

Given the ability to reach new media niches at a low cost, brands can actually employ this strategy in lean times. And by broadening the reach of their representational politics, they can begin new conversations with consumers who've long been writ as simply a clatch of soul claps and sombreros.

Our economy contracts, yet these markets expand.

Money is still waiting on the table.

Michael Hastings-Black is the co-founder of Desedo Films, a NYC production company that specializes in new media + minority markets.