Known Gallery in Los Angeles has been on a roll these past couple years. With its artist base and clientele, it has become an epicenter of graffiti crossing over into gallery scene, and the strength of its latest exhibition shows that it's even more than that.

Eric Haze's 'New Mathematics," featuring 35 paintings and 15 drawings, examines the complex relationship between abstraction, typography and design by using repetitive geometric patterns and the delicate interplay of positive and negative space to create a compelling, overarching representation. Haze's work makes clear reference to his graffiti past, but the work moves away from slogans and toward more a universal exploration of how graffiti captures the eye. He uses positive and negative space to break down the graffiti paradigm into compositions that can be more understood.

Haze began as a graffiti writer, eventually moving towards the world of design and working with such hip-hop acts as EPMD and the Beastie Boys before fielding larger clients such as Nike, Casio and MTV. His work has been exibited at the Museum of Contemporary Art in Hong Kong and was recently featured in the exhibition, "Art in the Streets" at the Museum of Contemporary Art in Los Angeles.

Greg Lamarche's "I Can See For Miles" is an exercise in the abstraction of graffiti's visual language. Lamarche uses found material and his personal collection of numerous printed materials to create intricately hand-cut collages. His work takes the common lettering of graffiti and warps what the brain can recognize into abstract lines of color. It's as if one were staring at graffiti on a wall and proceeded to shake their head from side to side violently. Lamarche has been featured in numerous publications including the New York Times, San Francisco Chronicle, Boston Phoenix, and Modern Painters.

"New Mathematics" By Eric Haze and "I Can See For Miles" By Greg Lamarche will be on display at Known Gallery until October 8th, 2011.

PHOTO GALLERY
"New Mathematics" By Eric Haze / "I Can See For Miles" By Greg Lamarche
Download
Calling all HuffPost superfans!
Sign up for membership to become a founding member and help shape HuffPost's next chapter
Join HuffPost 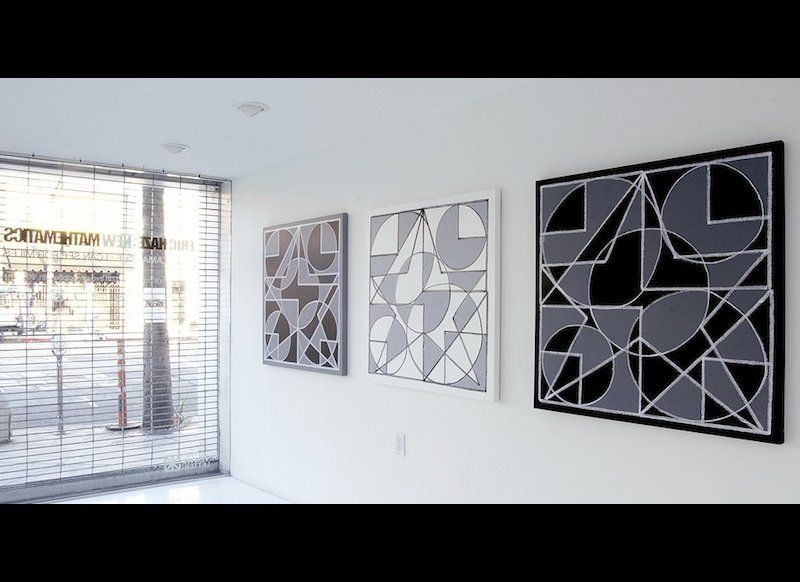