The McCain campaign and the RNC are sending out a mailer that pushes Gov. Sarah Palin as both the figurehead of the GOP ticket and a centrist.

A reader in Pennsylvania sends over a four-page pamphlet titled "McCain-Palin Solutions for Our Family," which labels as priorities for the Republican team non-traditional conservative positions such as climate change and stem cell research. The inset includes a copy of a USA Today article with the headline: "In targeting big oil, Palin 'governed from the center': She didn't press conservative views on lawmakers."

The next page includes a campaign statement on how "John McCain and Sarah Palin will work with Democrats and Republicans for sensible solutions." And underneath is a graph about how Palin "as the mother of a special needs child... knows first hand the value of advanced medical treatments research."

What's noteworthy here is not just the push to feature Palin -- whose popularity and favorability ratings have fallen drastically over the past few weeks -- in a leading role. It's also how consciously the campaign is trying to track away from conservative orthodoxy. The pamphlet was sent from a reader in Philadelphia -- obviously not the state's Republican stronghold. And it is tradition for presidential tickets to move towards the center as the election approaches.

But the desire to break from the party has really become a defining feature for McCain-Palin. Over the last few days, some of the loudest applause lines at their rallies have come when McCain declares that he is not George W. Bush. 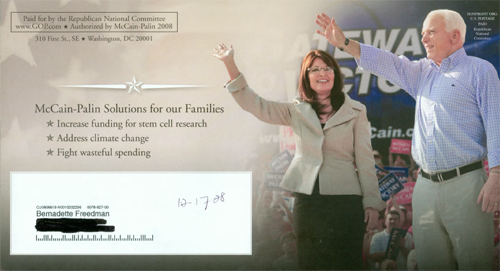 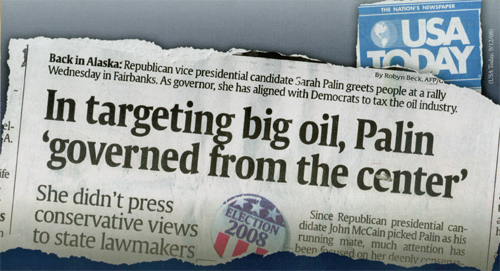 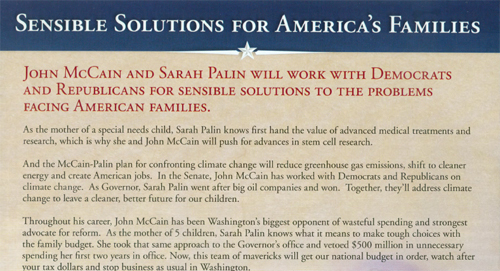 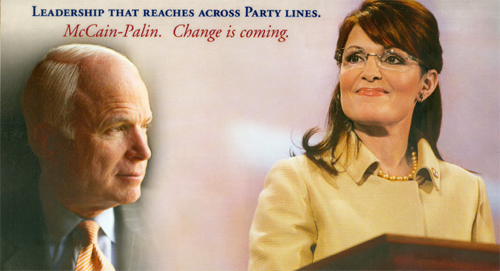