The Illinois Policy Institute's new Michael Madigan documentary,"Madigan: Power, Privilege, Politics," will serve as a significant historical artifact for generations to come for a couple of reasons.

First, the content of"Madigan: Power, Privilege, Politics" -- while often propagandistic in tone (more on that shortly) -- at times presents a pretty good picture of the workings of Illinois politics in the 45 years since Madigan stepped onto the state political stage.

Second, the very fact that it was made attests to the intense battle for power that defines Illinois politics at the moment. After decades of primarily Democratic control of Illinois state government, Republican Gov. Bruce Rauner brought unprecedented personal wealth and ideological determination to bear upon taking office in 2015. The appearance of "Madigan: Power, Privilege, Politics" will stand as a testament to the resolve of Rauner's allies to wrest power from Madigan circa fall 2016.

And, obviously, to their belief that Madigan himself is the cause of the fiscal and economic troubles that afflict Illinois.

The film, which debuted this week at special events at a handful of theaters in Chicagoland and downstate, is a product of Illinois Policy Action, the lobbying arm of the conservative Illinois Policy Institute. Rauner had contributed more than $600,000 to the institute before becoming a candidate for governor in 2013, and its free-market, small-government advocacy matches Rauner's philosophy.

The documentary became a significant news story a month ago when two of its interview subjects, Chicago Tribune cartoonist Scott Stantis and Capitol Fax publisher Rich Miller, said they weren't told of the Illinois Policy Institute's involvement even when they asked about the funding source for the project. This, combined with a trailer that bursts with scorn toward its subject, gave the film the kind of buzz marketing coveted by Hollywood.

Does it live up to the hype? To answer that, I refer to Point No. 1 above.

As a longtime follower of Illinois politics, I found lots of interesting stuff in the video, but nothing that I didn't already know and plenty that had me talking back to my screen. Still, hearing Madigan's background and approach explained by people like Miller, former Chicago alderman and political scientist Dick Simpson and former Republican state Sen. Steve Rauschenberger is a worthwhile exercise regardless of one's previous knowledge. Viewers also get a decent, though opinionated, civics lesson on the committee process in the Illinois House.

Madigan is the longest-tenured Speaker of the House in an any state legislature, having led the House for all but two years since 1983. Those two years when Madigan's Democrats lost control of the House -- from 1995-1997 -- are covered in one of the film's best segments.

"Those two years in the wilderness were very helpful," Madigan says in an archival interview.

Rauschenberger says the loss of power during those years changed Madigan's approach thereafter and instilled a will to never lose his majority again.

"It was a new Mike," Rauschenberger says, "It was Iron Mike."

The video dwells on Madigan's successful property tax law business, which has been the subject of intense criticism for many years by those who believe Madigan uses his immense power to bring business to his law firm. Rauschenberger says it's an egregious conflict of interest that's "out of proportion with what representative government should tolerate."

"I don't have any problem with his success as a professional outside the General Assembly," Daniels says. "Because that's our system today and there's nothing illegal about it."

Despite those enlightening moments, though, the video barely masks its true purpose, which is to convince viewers that the state's problems today all can be traced back to Madigan.

The first quarter of the video describes Madigan's role in handing out patronage jobs. That portion contains an interview with a Madigan patronage worker who describes how those placed in jobs by Madigan are immune from any discipline on the job, when they choose to show up. But the patronage worker, identified as "M," is actually an actor (Dave Buckman, according to the end credits) who is shown in silhouette with his voice distorted as he recounts the perks of being one of Madigan's guys.

I guess the Madigan machine is so powerful and vengeful that even an actor portraying a Madigan crony speaking anonymously isn't safe.

The video also seeks to portray Madigan as vindictively wielding huge sums of campaign cash that he uses to punish disobedient members of his House caucus while generously giving to campaigns of others.

"They know why they're there and they know if they don't play ball, they'll be gone," says Robert Blagojevich, brother of Rod, another interview subject.

I chuckled at this angle of criticism -- which is repeated by the video's narrator -- given that the video was made to move viewers into the Rauner camp. In the 2016 campaign cycle, Rauner has spread $16 million among Republican candidates. I suspect those Republicans, if elected, will "know why they're there."

State Rep. Ken Dunkin, D-Chicago, appears as an example of what happens to a Democrat who dares to cross Madigan. When Dunkin refused to side with Madigan on a couple key bills a year ago, Madigan put $2.8 million into the campaign of a primary challenger, Juliana Stratton, who defeated Dunkin on March 15.

What's missing, of course, is an interview with Republican state Sen. Sam McCann, R-Plainview, who voted with Democrats on a union bill and incurred Rauner's wrath. Rauner and his allies spent $3 million in an unsuccessful effort to unseat McCann in March.

I encourage anyone with an interest in Illinois politics to watch "Madigan: Power, Privilege, Politics," but to keep in mind that this is not something you'd find on "Frontline." It was written and financed by a very well heeled public action group and is designed to reinforce Rauner's anti-Madigan message. For everything you see on the screen, there's a lot more that's not explained.

The film is playing at theaters through Oct. 27 (a full schedule is here). It is also airing on several downstate television stations over the weekend. It'll be available for online viewing but no date has been announced. Here's the TV schedule: 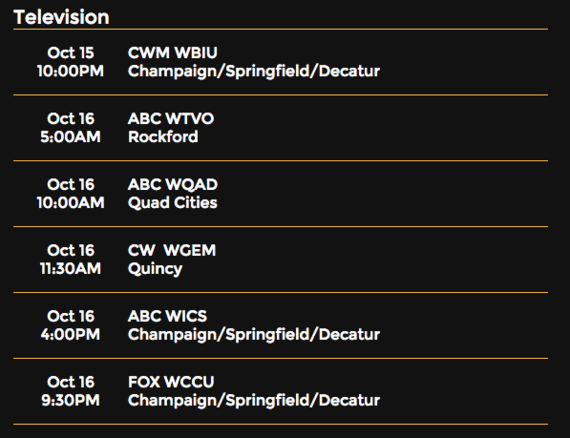 Recommended: Fact-check Friday: Did she really say that?