Last night marked the debut of the new PBS mini-series, "Broadway or Bust," which follows 60 high school students from around the United States as they vie for a shot on Broadway as well as awards. Described as "part competition, part performance, and part non-fiction drama," the three-part series is addictive.

The talented young adults on display were chosen from over 50,000 students around the country. They arrived in New York City earlier this summer for a "theatrical boot camp" to prepare for the competitive National High School Musical Theater Awards, also known as the "Jimmy Awards" -- named for Broadway theater owner and producer James M. Nederlander (The Nederlander Organization will be celebrating its 100th anniversary this fall).

Through the show, we get a close hand look as the students prepare for the final showcase and award ceremony. They learn an opening number with the help of director Van Kaplan and choreographer Kiesha Lalama, and get one-on-one coaching from actors and performers like Leslie Odom Jr, Michael McElroy, Telly Leung, and Liz Callaway.

Leslie Odom Jr, from Rent and star of television's hit series Smash, spoke on the phone briefly with The Huffington Post about his experience of coaching the aspiring actors and actresses. "It’s not about you. Which is so great. It’s so selfless. It’s a little span of time that you can focus on somebody else. To focus on how to make them better," Odom said. "People are coming to you at their most vulnerable, they’re showing you the parts of themselves that they’re afraid to show. The parts that they’re not so sure about, not so secure in. And so it’s a really holy profession I think, teaching. If you do it right, it can change somebody’s life."

Odom participated because he wanted to share his own experiences as an actor who debuted on Broadway when he was just 17. His advice to all the students: "You gotta love this thing. Whatever you choose to pursue -- medicine, law, writing, you have to love it. You study it, you eat it, you drink it, you try it, you do it, you love it in every way."

"Broadway or Bust" is a production of WGBH Boston and co-executive producers Lance K. Shultz and Laurie Donnelly in association with The National High School Musical Theater Awards.

Catch the new series and see who takes home the awards on PBS Sundays; the final dates are September 16 @ 8pm ET, and September 23 @ 8 pm ET.

In the meantime, check out a hilarious slideshow on a certain sartorial item seen frequently on "Smash":

PHOTO GALLERY
The Scarves of Smash 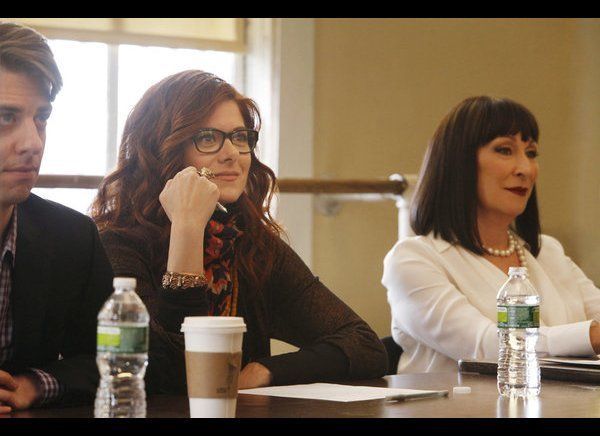