The Mission District's long-shuttered New Mission Theater may soon be getting revived as the latest addition to the rapidly growing chain of Alamo Drafthouse beer-slinging movie theaters. But an obscure provision in the city's planning code could stop the project in its tracks.

Property owner Gus Murad, who also operates the popular neighborhood restaurant Medjool, made his intentions for the property public at meeting of San Francisco's Historic Preservation Commission earlier this week.

With its Art Deco interior and 70-foot multi-colored sign towering over a prominent Mission Street marquee, the building is registered on the city's list of historic places as one of the last standing examples of the classic, early 20th century movie houses that once dotted the Mission District.

"When you see a gem like this in the Mission...being able to bring it back to its heyday, it's very exciting," Alamo Drafthouse Chief Development Officer Timothy Reed told the committee, according to Mission Local.

The project would subdivide the main auditorium from one theater to five. A large auditorium would remain on the ground level, while three additional theaters would be constructed on the lower balcony level, and a another on the upper level balcony. A new tiered seating platform would be built on the main auditorium over existing sloped floor. The projection room on the first floor would become a bar.

In addition to the multiplex, the development plan calls for the demolition of the next door Giant Value department store and the installation of a 95-unit condo complex in its place.

In the decade since Murad purchased the property from City College, the building has largely sat empty, save for the brief period when it was a furniture store and the one night in 2006 when a bunch of partiers broke in and staged an illegal rave, resulting in major damage to the building's interior.

Other aborted plans for the space have included converting it into a nightclub or using it as a live performance venue.

Murad put the property up of for sale last year. As Uptown Almanac noted, Murad was rumored to be in negotiations last year with a group of New York-based investors looking to purchase the theater, although it appears as though that deal fell though.

Under the current San Francisco Planning Code, the current beer-and-a-movie plan might not technically be allowed. It likely falls inside a special use zone inside the Mission that made it illegal in the mid-1990s to open any new businesses selling alcohol that weren't "bona fide restaurants" or non-profit performing arts venues.

Last year, legislators slipped a couple more exemptions into the law, directed at helping two very specific businesses--the Roxie Theater and the Mission Blowing Club. However, since the exemption allowing the Roxie sell beer and wine only applied to single-screen theaters, the five-screen Alamo Drafthouse plan would need its own exemption to avoid becoming the Alamo Soberhouse.

That said, there's a good chance the theater will get an exception benefitting it written into the planning code. Assisting with the opening of the Mission Bowling Club became a cause celebre for a handful of local politicians like Supervisor Scott Weiner, who has been pushing hard to get restrictions like this one either eased or lifted entirely.

"The Mission...[special use districit] has outlived its usefulness," wrote Wiener in an op-ed for Beyond Chron. "It started out with a valid purpose--controlling alcohol blight--but as is often the case with well-intentioned Planning Code bans, the law of unintended consequences has reared its ugly head."

Not only that, but since Alamo Drafthouse either operates or is in the process of opening 15 theaters around the country, the company would need to apply for a special use permit to skirt the city's restrictions on chain stores. San Francisco has only rejected a very small handful of the total number of chain stores that have applied to move into the city, so Alamo Drafthouse failing on this front seems unlikely.

If Alamo Drafthouse manages to clear all these hurdles and eventually moves into the space, SFist noted what's likely to be the best part of the moviegoing experience:

Per Alamo's website, the chain is staunchly against playing ads before movies. "Instead of ads or mind-numbing content named after the number of minutes you have to sit through it if you get to the theater early, we create custom pre-shows with content themed to most of the features we program."

Check out this slideshow of pictures of what the inside of the theater looks like now, provided by Ted Whipple and Ed Bedard of local historical preservation non-profit Friends of 1800: 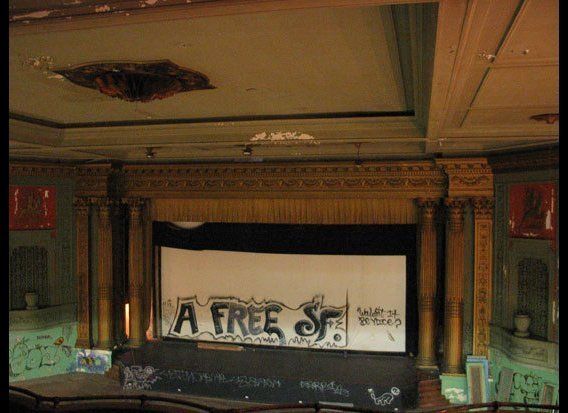