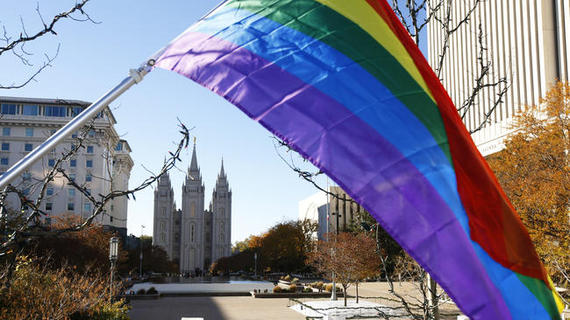 Last Tuesday, October 25th, the Church of Jesus Christ of Latter-day Saints released an updated version of their website on LGBT people. As an openly gay Mormon, I'm keenly interested in what the Church has to say on the topic. But the timing of this website makes it even more interesting: It's been a year since the announcement of the church's 'exclusion policy,' as it's become known on social media. That policy essentially excommunicates any LGBT member married to someone of their same gender, and denies saving rites -- including baptism -- to children of LGBT parents until those children turn 18 years of age, and only then if the children publicly disavow the relationship of their parents.

But that's not the only dark cloud hanging over the church's head right now. Since the policy, the suicides of many LGBT Mormon young people have been thrust into the spotlight, and the church has been widely criticized for creating the toxic environment that contributed to these deaths. While no one has an exact count -- Utah doesn't track religion or sexual orientation statistics when someone dies -- reports last January were as high as 32. Neon Trees' Tyler Glen released the names of still more victims in this video, and CNN covered the tragic story of Harry Fisher, a gay Mormon man who came out on social media only weeks before his tragic death.

The year-old policy is noticeably absent from the new site, leading some to speculate that the site is just a PR endeavor in an attempt to mitigate more bad press. Others wonder if it's an indication the policy is going to be abandoned in the near future. In the words of one friend, "I'm astonished there's no mention of that disgraceful policy. This [site] isn't progress at all unless they're rescinding it. Pretending it doesn't exist is unconscionable."

Either way, there's a lot to digest on this new site -- but quantity doesn't necessarily translate to quality.

The fact that this site even exists. Mormonism is the only major religion to have a site dedicated to LGBT members. While it's not completely accurate (and in some cases actually proliferates dangerous messages) it still opens the door to have conversations that may not take place otherwise. Some may dismiss it as a church attempt to gloss over the carnage Mormonism has inflicted on its LGBT members and the broader LGBT community, and maybe that's true. But it still provides an opening to talk about a subject that was previously cloaked in silence.

The site was very publicly announced to press, local leaders, and Mormon members. This is also a step in the right direction. The original site, released in 2012, was done quietly with no fanfare, and for a time wasn't even linked to or mentioned on the church's primary website. Like this site, it was very imperfect but held some good information (like affirming the notion that LGBT orientation is not a choice), and many local leaders didn't even know it existed. Given the stealth release and its disjointed link to other church materials, many bishops didn't believe it was a Mormon-sponsored site at all -- even after they'd seen it.

The URL -- Mormon and gay -- is more inclusive. In 2011, when I took a role as the executive secretary in the bishopric of my home ward in San Francisco, I began speaking out for LGBT inclusivity. A common refrain I heard from both my Mormon community as well as my LGBT fellows was, "You can't be Mormon and gay!" In fact, earlier this year, Elder David A. Bednar stated, "there are no homosexuals members of the church." The inclusive nature of the URL and many of the messages on the site reflect a more accurate reality -- there are tens of thousands of us, probably more.

Videos that show gay Mormons with supportive families and congregations. I love this part. It's good to see supportive families, even though the site only shows it for Mormons who choose to lead a celibate life. The truth is, that same kind of support should be given to every LGBT Mormon, including the ones who are lucky enough to fall in love with and marry someone of their own gender.

Sadly, that's not our reality. LGBT Mormons are routinely rejected by congregations, and in many cases even their families. Mormon parents that fully support their LGBT children are frequently shunned, ridiculed and often pushed away from the faith, as well.

Lots of talk, not much action. The new site is chock full of declarations of love, and that's great. While LGBT individuals might welcome those words, love is a verb and matters most when it is experienced, not merely stated. The site does little to tell Mormons how to actually practice the love it preaches.

This is particularly problematic for LGBT Mormon youth. Evidence-based research done by the Family Acceptance Project out of San Francisco State University tells us that while words matter, it's the actions and behaviors of the parents that actually help keep LGBT children safe from negative outcomes, including depression and suicide.

This research identified over 50 rejecting and 50 supportive and accepting behaviors exhibited by parents and even went so far as to list them in a booklet geared specifically to Latter-day Saint parents, which reads like a 'how-to' manual that helps parents understand what keeps their children safer -- and what puts them at risk.

Mormon parents are counseled frequently about the importance of families and children. The Latter-day Saint book, "Strengthening our families: An in-depth look at the proclamation on the family," parents are reminded "effective loving is more than regularly announcing our affection to our children. Effective loving helps the child feel safe, valued and accepted."

The fact that the new website fails to remind parents (and Mormons as a whole) what love for LGBT people looks like in action -- versus flowery words -- is a huge miss.

Mixing truth with uninformed propaganda. Some sections of the site are filled with head-spinning doublespeak that confuses fact with fiction. Take the section on "Seeking Professional Help," for example. The site says it's unethical for a therapist to operate under the premise that a "change in orientation should or must occur." That's good.

Yet the same sentence claims, "shifts in sexuality can and do occur for some people." Oops, we've slid back to our incorrect dogma. That's nothing more than a subtle way of saying, "You can't pray away the gay -- but don't forget to try."

Science has shown that attempting to "shift" orientation is unsuccessful, it can also lead to a host of other outcomes including shame, depression, fear, anger, lowered self-esteem, feelings of failure, and even suicidal thinking. A better approach is to teach LGBT people that they're okay just the way they are.

There are so many examples where truth is mixed with misrepresentations it would be difficult to list them all. Ironically, the site itself is a remarkable microcosm of Mormonism's warped understanding of LGBT issues as a whole: Unclear and confusing to navigate, resulting in a toxic soup of mixed messages and behaviors -- some of which are lethal to vulnerable LGBT members, especially youth. It would take a remarkably well informed parent or church leader to sift through the doublespeak and unearth the good while leaving the rubbish behind -- and sadly, most Mormons aren't well informed enough to distinguish the good from the bad.

Continued use of the term "same-sex attraction" (SSA). While the site does employ accurate terms (lesbian, gay, bisexual) in some spots, it obfuscates them by also using "same-sex attraction." At one point, the website has the audacity to make the claim, "same sex-attraction is a technical term..."

To say that same-sex attraction is the core construct for human sexuality is simply wrong. Everyone has a sexual orientation that is comprised of identity, attraction and behavior. Research going back decades shows that sexual attraction (including same-sex attraction) is just one part of a person's sexual orientation - not all of it. But denial or minimizing a young person's LGBT identity is related to serious health risks for LGBT young people. According to research from Dr. Caitlin Ryan at the Family Acceptance Project, family rejection of an LGBT youth's identity contributes to serious health risks, including depression and suicide.

Continuing to use "attraction" to replace sexual orientation is not just incorrect, it increases risk for LGBT young people and reduces LGBT identity to a mere feeling that can be changed or willed away. For a site that claims to strive to help LGBT individuals, it's immoral to use terms that we know increase risk for harm.

No resources for LGBT youth -- the most at-risk population inside Mormonism. This is a huge miss -- and it's a shameful one for a couple of reasons.

First, suicides of LGBT youth have been in the media several times this year, highlighting the fact that this is an extremely vulnerable group.

Second, we know better. In 2012, The Family Acceptance Project released the aforementioned LDS version of their family education booklet that teaches families and communities to support LGBT youth in a way that reduces their risk for substance abuse, diminishes their risk for STDs including HIV, and dramatically reduces suicide and depression risk. This material has been available to the church for several years, yet senior church leaders continue to ignore it. The Family Acceptance Project has made this booklet available to download at no cost here.

"Love thy neighbor as thyself"

The opening video, "God Loveth His Children" features Elder L. Whitney Clayton of the Presidency of the Seventy. Elder Clayton reminds Mormons of the second great commandment: Love thy neighbor as thyself. This, he says, is at the very heart of the Gospel of Jesus Christ.

But as Mormons, we don't really love LGBT people as ourselves. We love them as something less than us. Every article, video, and section of the website is underpinned with a single notion: LGBT people are, at their core, broken, afflicted, and a little bit less than whole.

That's not love -- certainly not the kind of love that's at the core of our Savior's Gospel. It's a misshapen disdain for LGBT people based in ignorance, fear, bigotry, and elitism. That's offensive at its best, and at its worst it can be deadly to the vulnerable among us. You simply cannot teach someone that they are broken and expect them to have a healthy, happy life.

But I don't think all hope is lost. There is a bright glimmer of changing hearts and minds inside the Mormon population. It's not going to be long before that contagion of unconditional love and inclusion spreads to the highest levels of the church.

Maybe then our prayers will change from, 'Lord, grant us the ability to help our broken, afflicted and suffering LGBT members,' to a more humble prayer our Savior can actually answer: 'Lord, help us understand how to team with our LGBT brothers and sisters as a family of equals, and together build a better Zion.'

And maybe once that happens, I -- and the tens of thousands like me -- actually can be 'Mormon and Gay.'