MSN is getting a Windows 8 makeover.

With Microsoft's new desktop and tablet OS just around the corner, the company's MSN homepage, a portal to Microsoft products as well as popular web destinations, will be updated for greater compatibility with "an increasingly touch and tablet-friendly world," according to the MSN blog.

On October 26, Microsoft will release the Windows 8 OS, Internet Explorer 10 and the Microsoft Surface tablet. When users access MSN.com from one of these new products, they'll be greeted by a slick new interface. The company's blog describes the site's revamp as a "cleaner more 'app-like' experience."

"The pages render twice as fast as the classic MSN web experience," according to the blog post.

When it comes to design, the new MSN will feature one highlighted story, along with the main headlines of subcategories like "sports," "entertainment" and "money" on the lower half of the page. Inside the top center box are basic buttons, which include links to Hotmail, Skype, Twitter and Facebook. The website itself will also swipe from right to left instead of up and down, according to ReadWriteWeb.

This upgrade will be seen only by those who are accessing MSN via devices running Windows 8 and Internet Explorer 10. Those purchasing a Microsoft Surface tablet, for example, will automatically have the latest version of MSN set as the default homepage for the Internet Explorer 10 browser. "MSN for Windows 8 will not replace the current experience but rather, offer an enhanced version optimized for Windows 8 and IE10 users," a spokesperson told ITworld.

The older layout of the site (seen below) will remain the default for previous versions of Internet Explorer, or for users accessing the site via non-Microsoft platforms.

MSN is ranked as the 17th most popular website for 2012 by Alexa's internet statistics. The service debuted in August of 1995 and was released with the Windows 95 OS, per the company's website.

What do you think of the new MSN? Will you be downloading Windows 8 and Internet Explorer 10? Are you planning on picking up a Microsoft Surface tablet? Let us know your thoughts in the comments section or tweet us at [@HuffPostTech]. Then check out more pictures of the latest MSN upgrade (below), or read up on the Microsoft Surface tablet (here). 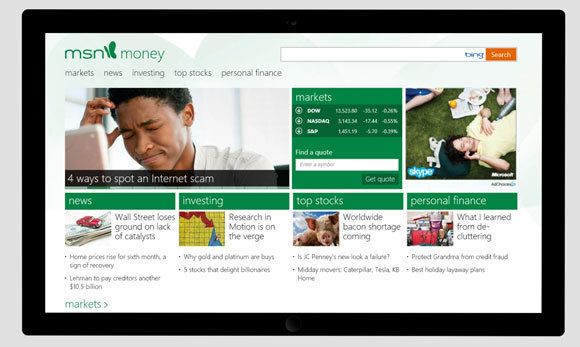