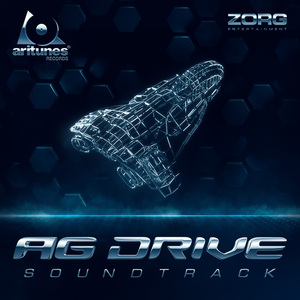 For those unfamiliar with the world of gaming, it may come as a shock to learn that video game soundtracks are actually a thing. In fact, the business of video game music has been around for quite some time. Who could forget everyone's favorite, catchy Super Mario Bros. tune?

In recent years, the multibillion-dollar game industry has attracted a growing number of game music composers, in addition to shining a spotlight on a few previously unknown (by mainstream standards) veterans in the business. Such is the case of Finnish composer Ari Pulkkinen whose success with the Angry Birds theme song catapulted him into an elite stratosphere in the game music world, and beyond when the London Philharmonic Orchestra played the song to a live audience. Pulkkinen's subsequent success has since led to the launch of his own label, AriTunes Records.

With the release of ZORG's futuristic racing game, AG Drive (the number one racing game in the U.S. this year) comes Pulkkinen's master compilation of energy-driven, electronic dance music (EDM) songs that lean toward the genre's trance, psytrance and dupstep sounds. Of the album's 14 songs, Pulkkinen's "Drive" mix serves as the soundtrack's lead single and offers a pulsating rhythm with powerful beats that drive the heart of the game and could easily motivate the listener to dance.

Fusing the album's futuristic sounds with the addition of a melodic vocal arrangement, Valtonen's "They Call Me Steve," is a progressive house mix that also introduces one of the characters available for play. This haunting track is one that's bound to get stuck on the brain and set on repeat.

The Domestic Machine Movement's "Delta Course" track offers an old-school video game sound with robotic vocals, while Tommy Baynen's active trance track "Rock That" is about as radio-play-worthy as any EDM track can get. The latter is one that would no doubt work party-goers up during the summer.

Overall, the AG Drive Soundtrack is infused with the right combination of ingredients to entice both video game fanatics and electronic music fans, whether they're one-in-the-same or not. Be advised, after listening to this album, a fan of one, may easily become a follower of the other — the end result of a trance-like pull one can only assume Pulkkinen may have intended.

To learn more about the album and other AriTunes Records' music, visit: www.aritunesrecords.com