I cannot imagine how people live without national parks in their lives. Or how I lived before I knew about them.

Waking up this morning still suffused with feelings of gratitude and appreciation from visiting my 178th unit yesterday, I'm even more blissful that I was there coincidentally on the day President Obama added the Benton-Paul Women's Equality National Monument as the 411th unit of the National Park System. 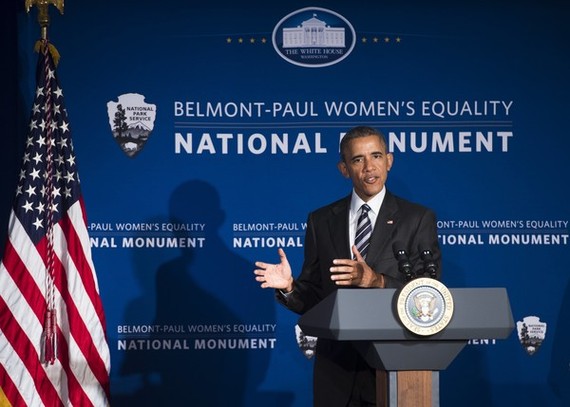 The president called the site "a hotbed of activism, a centerpiece for the struggle for equality, a monument to a fight not just for women's equality but, ultimately, for equality for everybody."

Walking through the stately red brick home on Capitol Hill among the artifacts of the suffragettes who used it as their headquarters a century ago, I felt the strength of their spirit and a profound irony. A full 100 years behind their efforts, the monument to their struggle for equal rights for women was being named on Equal Pay Day, the day well into the year when a typical woman's salary finally catches up to that made by the typical male last year. 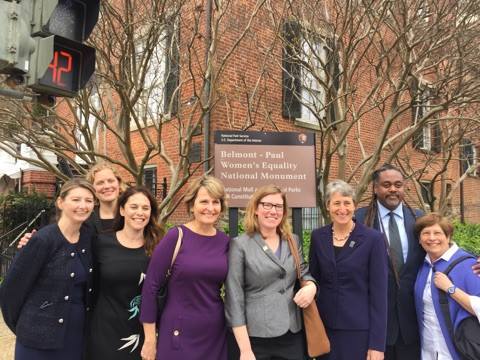 Members of the NPCA team including Alan Spears (2nd right) and Secretary of the Department of Interior Sally Jewell.

How far we have come! And how far not! To be able to tour the house and museum with members of the board and council of the National Parks Conservation Association and staff members including our longtime protégé Alan Spears who helped get the monument designated, was blissful indeed.

According to the White House, the Monument "will protect the iconic house that has served as the headquarters for the National Woman's Party since 1929. From this house, known in recent years as the Sewall-Belmont House, members of the Party led the movement for women's equality, authoring more than 600 pieces of federal, state and local legislation in support of equal rights.

"...will permanently protect one of the oldest standing houses near the U.S. Capitol and help preserve an extensive archival collection that documents the history, strategies, tactics and accomplishments of the movement to secure women's suffrage and equal rights in the United States and across the globe.

"The new monument is named for former Party president, activist and suffragist Alva Belmont, who was a major benefactor of the National Woman's Party, and Alice Paul, who founded the Party and was the chief strategist and leader in the Party's ongoing fight for women's political, social, and economic equality..."

Soon after leaving the monument I received this article, The Rise to Power of the Congressional Anti-Parks Caucus. How anyone elected by the American public can be against parks protected "for the benefit and enjoyment of this and future generations" is beyond me. It's right up there with Miami-Dade County's plan to pump sewage 10,000 feet underground on Virginia Key on Biscayne Bay, the waterway in which Biscayne National Park is located.

But visiting Belmont-Paul has renewed my spirit to keep striving toward the goal - protection of our publicly owned lands and ensuring they're a benefit to all. I owe it to those women and the men who supported them, including most staunch abolitionist Frederick Douglass. So now I'm heading off to Capitol Hill with member of our NPCA team for our annual visit with our Representatives and Senators . It feels especially urgent to advocate for our parks this Centennial Year of the National Park Service.

Please follow the links I've included and take some action in support of our beloved natural, cultural and historical treasures!