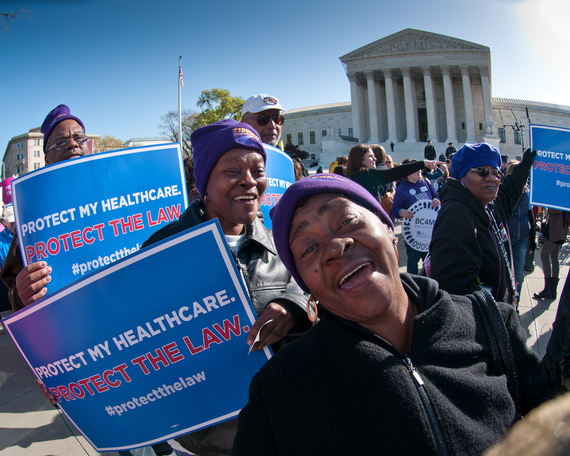 Rhetoric matters because it motivates people to act. Data is how we measure the effects of the actions taken. In recent months a number of studies have looked at the effects of the Affordable Care Act, i.e., Obamacare. The most recent release demonstrates that the law greatly increased access to health care--with a disproportionate amount of the benefit going to non-white Americans.

Thanks to other studies, we also know that, for example, the gap between whites and blacks in terms of the percentage of children uncovered completely disappeared by the end of 2014. Additionally, the law has reduced medical debt for those who gained access to insurance thanks to Obamacare. 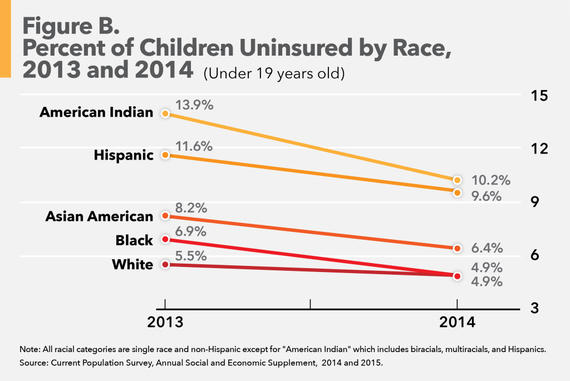 It is important to note that the failure to expand Medicaid nationwide has blunted the law's impact on African Americans in particular because the Republican-led states that have rejected Medicaid expansion have larger than average black populations. Obamacare helped--but could have helped even more. On that point, white Americans gained coverage largely because of expanded access to government-run insurance like Medicaid, while gains among non-whites came primarily from private insurance.

In addition to bearing his name--unofficially, at least--Obamacare reflects this president's approach to the intersectionality of racial and economic issues more broadly. He has long argued that the most effective way to help the greatest number of non-white Americans is through programs that are universal in terms of race. Obama further explained in The Audacity of Hope:

Universal appeals around strategies that help all Americans...along with measures that ensure our laws apply equally to everyone and hence uphold broadly held American ideals (like better enforcement of existing civil rights laws) can serve as the basis for [multiracial] coalitions--even if such strategies disproportionately help minorities.

Such appeals helped put him in the White House. The policies he enacted, imperfect as they may have been, helped him win a second term.

Now let's connect this discussion of policy and its impact to the political fight going on right now--because how that fight plays out will profoundly affect our country's policies going forward. On the whole, the contest for the Democratic nomination has been a strongly positive one for the party and for the progressive movement--far more so than the Republican contest has been for their party (though that's an awfully low bar to clear). Even though it appears he will not win the nomination, Bernie Sanders--building on the work of Occupy Wall Street and protest movements like the Fight for $15 effort to raise the minimum wage--has put economic inequality front and center on our political agenda.

The debates--both on and off the formal stages--between the Clinton and Sanders camps have been largely substantive. One of those substantive areas of debate is the relationship between economic and racial inequality. Early in the campaign, Sanders faced criticism for either ignoring racial and ethnic issues, or seeming to suggest that if we solve economic inequality, racial inequality would take care of itself. Without evaluating the fairness of this criticism, we can say that Bernie clearly responded to it and incorporated issues like disproportionate police mistreatment of African Americans into his campaign message. Nevertheless, some criticism continued.

This is a discussion of vital importance that progressives must keep having with each other in order to build a truly inclusive coalition, not to mention one that comprehensively addresses the multiple forms of inequality that persist in our country. What we must avoid doing is making this into an either/or discussion. Just as we cannot limit our focus to economics, neither can we ignore it, even when we are talking about racial inequality. These issues intersect.

This fact might seem obvious, but in the heat of a primary fight--when each side inevitably tries to take down the other in order to win more votes--it sometimes gets lost. As Janell Ross has pointed out, surveys show that "jobs, wages and the economy are very important" to black and Latino Americans--even as the majority of them support Clinton over Sanders.

This week's data on Obamacare remind us of something we already know, but which some of us can at times forget in the heat of a primary season. Universally aimed policies focusing on economic issues can neither solve every problem minorities face nor eliminate structural racism, but they remain a crucial tool to shrink racial inequities. However, they must be accompanied by approaches that recognize the need to address race more directly in the ways described by, for example, Campaign Zero. It can't be either/or--it must be both/and.

Although universal policies disproportionately help people of color, they do aid significant numbers of white Americans as well. Thus, laws and programs like Obamacare at least offer the potential of strengthening the recognition among lower-income whites that their interests parallel those of non-whites in similar economic straits.

Strengthening that recognition will build greater support for the progressive movement, and thus for the enactment of even more effective policies to address inequality in all its forms. Furthermore, strengthening ties across the color line--in particular among the economically vulnerable--can in and of itself reduce the hate, fear, and anxiety that fuel racial conflict on an individual and societal level. Progressives must be able to work on economic and non-economic issues at the same time.

And so we will.