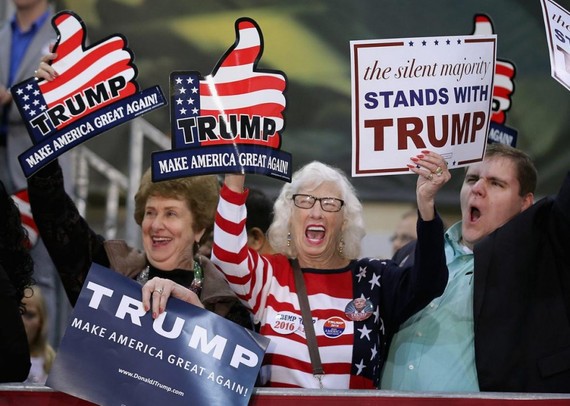 It's no secret that Democrats, especially liberal Dems, were devastated when Trump won the election. For them, it signaled the unleashing of the unwashed masses upon their educated sensibilities. Liberals felt like the Night's Watch in Game of Thrones, as they saw countless hordes of White Walkers relentlessly scaling the wall of Castle Black, with only one thought in mind: the end of civilization as they knew it.

Later analysis of voter patterns seemed to prove liberals right. For the first time in history, education level was the factor that most determined what people would do at the ballot box.

According to fivethirtyeight.com, "How do we know that education levels drove changes in support -- as opposed to income levels, for example? It's tricky because there's a fairly strong correlation between income and education.4 Nonetheless, with the whole country to pick from, we can find some places where education levels are high but incomes are average or below average."

What they found, bore out the theory: "High income, medium education counties went for Trump." Higher education, no matter their income, went for Clinton. According to Pew Research, "In the 2016 election, a wide gap in presidential preferences emerged between those with and without a college degree. College graduates backed Clinton by a 9-point margin (52%-43%), while those without a college degree backed Trump 52%-44%."

But, thinking about educated vs less-educated voting patterns may explain what happened but does nothing to bridge the divide. Instead, it fosters an us vs them mentality, and, as we all know, that's a pretty slippery (and ultimately dangerous) slope. To say that "college graduates backed Clinton by a 9-point margin (52%-43%)," and stop there is to ignore the fact that 43% of college-educated voters did vote for Trump. And, along with the under-educated and non-college educated population, those folks turned Trump Tower into White House North.

So, who are these people? This is a question that not enough people are asking. Let's start with this: They are neither stupid nor delusional. Life in the Boomer Lane can hear the screams from readers, but she will move on. This is her blog and she sits on its Iron Throne.

Next, they have as wide an array of concerns as anyone else does. (Again, LBL will ignore the screams.) They don't all wear stupid tee shirts or red baseball caps. They don't all have those grating accents (you know who you are). They don't all own ATVs or sleep under blankets with an American flag motif. And they don't all think Trump is the greatest thing to come along since the Second Amendment. Some of them actually dislike the man. As somebody wiser than LBL put it, "They are not a monolith." They are us, meaning they are Americans, part of the fabric of our country. They have always been here. They will always be here. Unless we figure out a way to acknowledge that and work toward the common good, we are doomed.

So, we are still left with the question: Who are these people? For that, LBL directs you to an illuminating book, Strangers in Their Own Land: Anger and Mourning on the American Right, by Arlie Russell Hochschild. Hochschild didn't just theorize about the American right. She lived among them. For five years.

Hochschild is a Sociology professor out of Berkeley, perhaps the most unlikely candidate to be welcomed into several entrenched, right wing communities of Louisiana. But there she went. And, just by being herself and treating these people as though she had no agenda other than to find out who they were and to listen to what they had to say, they welcomed her into their lives. The result is eye-opening in any number of ways.

Read the book. Don't start with any assumptions. Just read. Then go back to your opinions about what this country should be. LBL believes that when we have a real awareness of all of us, rather than simply us, we see that the stakes are even higher than we thought they were. And this great experiment that we call democracy will depend on all of us for a solution.