New Orleans is such a culturally rich city. It's no wonder its citizens love, support and attend the New Orleans Film Festival. Take their lead. Plan a vacation around NOFF and you can watch world premiere movies, scout out up-and-coming filmmakers and take advantage of all the fun activities the city has to offer. Have some fun in and around NOLA. Start with these 8 tips. 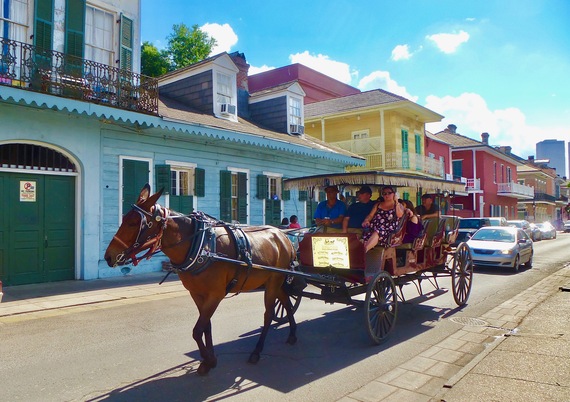 Eight Things to Do in NOLA

1. Commander's Palace - The Gala Presentation at the New Orleans Film festival this year was Ella Brennan: Commanding the Table, an affable documentary about the matriarch of the Brennan Family restaurant dynasty, Ella Brennan. Once you see this colorful film, you can't leave NOLA without eating at one of her restaurants. Her Commander's Palace, a James Beard Foundation Award-winner, is still the gold standard for service in the Big Easy.

The A la Carte menus gives you plenty of choices. The Chef's Playground Tasting Menu lets the chef give you options that can play out over an entire evening as you start out with Louisiana Caviar and segue into Louisiana Soft Shell Crab. Or there's Chef Tory's Three Course Offerings with soup or salad, entrée and dessert.

2. Dooky Chase's Restaurant -- Leah Chase, known as the Queen of Creole Cuisine, has hosted countless TV shows, and is the co-proprietor of the restaurant that bears the name of her husband's parents. The eatery dates back to 1941, when it was a sandwich shop in the Tremé district. Mrs. Chase took it over and it became a premier restaurant with the finest Creole food and walls adorned with African Art. In the '60s, at the height of the civil rights movement, upstairs at Dooky's was a meeting place for Thurgood Marshall, Dr. Martin Luther King and other social activists fighting for equality. It has hosted James Baldwin, Sarah Vaughn, Quincy Jones and President Barack Obama.

Hints: 1.) Dooky Chase's Restaurant building at 2301 Orleans Avenue looks like someone's home; be careful or you'll drive by it. 2.) The lunch buffet, served Tuesday thru Friday 11am - 3pm, is a great way to sample the perfectly Crispy Fried Chicken, Red Beans and Rice and Collard Greens. Save room for the Peach Cobbler. It's the best in town. 3.) Friday Nights Mrs. Chase prepares a special menu for her customers: Word has it that the Red Fish Orleans (with Crab Meat) served with Eggplant Rice is a great choice.

3. Houmas House Plantation and Gardens - If you're planning a wedding, an anniversary celebration or looking for a quick excursion outside NOLA, drive the 45 miles to this canary yellow, two-story mansion, relax, fine dine and take in a bit of history. Formerly one of the largest sugar plantations in the country, dating back to the 1700s, it is now a historic site. This classy B & B is set on 38 perfectly manicured acres with a maze of verdant lawns, flower gardens and massive regal Live Oak trees that have shaded the grounds for centuries.

The main house, once a setting for the 1964 Bette Davis thriller Hush... Hush, Sweet Charlotte, is filled to the brim with priceless antiques. Guides dressed in Southern period costumes give tours throughout the mansion, and you'll need their insights or you won't have a clue that the gold mantel clock you were staring at once belonged to Marie Antoinette or those tarnished silver spoons in the glass case were from Napoleon's collection. There are 21 luxurious private cottage rooms on the property. An Amphitheater is being built along with a museum and both should open in 2017 or 2018.

Hints: 1.) The Carriage House Restaurant serves breakfast and dinner seven days a week. Latil's Landing Restaurant features a Seven Course Tasting Menu ($85 per person) and Nine Course Prix Fixe Menu ($85 or $125 per person), Wednesday through Saturday, 6pm to 9pm (by reservation). Cafe Burnside is open for lunch 11am to 2pm daily Monday to Saturday, and 11am to 3pm on Sundays. 2.) At Latil's Landing, try the tasty Bisque of Curried Pumpkin, Crawfish and Corn Seasonal Soup as a starter. Choosing between the Community Coffee Rack of Lamb and the Butter poached Cold Water Lobster Tail is a tough decision. The best dessert, hands down, is the Fried White Chocolate Bread Pudding which has the texture of French toast with a soft delectable center.

4. New Orleans Athletic Club - They say age before beauty, and that is the case with this grande dame of health clubs, which dates back to 1874. It was founded by a group of young men who had a love for boxing, fencing and other gymnastic exercise. In the coming years, the beige-colored building on N. Rampart St. near the corner of Bienville Ave., welcomed an impressive group of members and guests: John L. Sullivan the first heavyweight champion of gloved boxing from 1882 to 1892, trained in the boxing ring. Johnny Weissmuller (Olympic Swimming Gold Medalist and star of Tarzan movies in the '30s and '40s) swam in the pool. Kareem Abdul Jabbar gave basketball clinics in the gym. Roberto Durán, Tennessee Williams and Harry Connick Jr. have also worked up a sweat at NOAC. Tourists pay $20 for a one-day guest pass.

Hints: 1.) Skip the exercise rooms on the first floor and head up to the third floor's massive rooms with aerobics studios, strength equipment, huge windows and skylights. 2.) NOAC has the only swimming pool in a health club in downtown NOLA. 3.) The history of the place shrouds you. The men's shower area alone, with its individual white limestone looking walls, makes you feel like Clark Gable will walk out the steam room any minute! And back in the '40s he did.

5. Whann-Bohn Mansion - This stately, three-story mansion was built back in 1859 for ship Capt. William Whann. It was then bought by August Bohn in 1866, hence the hyphenated name. For the next 100-odd years, the building would change hands, and fall on hard times until it underwent a full renovation. Set on the corner of Esplanade Avenue and Bourbon Street, and on the edge of the French Quarter and the Faubourg Marigny neighborhood, this majestic building is off the beaten path but in walking distance to everything.

These days out-of-town film and TV crews, who need a place to do business and rest their heads, stay in the suites with 20ft-high ceilings-- and tourists do too. The suites come with private bathrooms, unlike many B&Bs, and the penthouse suites also have large modern kitchens and washer/dryers. Swanky antique-looking furniture sits grandly on refurbished wood floors where the interior design looks like it took its cue from The Great Gatsby. There are balconies and a quiet courtyard.

Hints: 1.) The free parking in a locked driveway is worth its weight in gold. 2.) Walk out the front door, down Bourbon Street and five quiet residential blocks away you run into the heart of the French Quarter with the world's most notorious street party and bar after bar of live music. 3.) Evenings, folks gather drinking and socializing like they were at someone's backyard BBQ as they stand outside a bar across the street called Port of Call.

6. Frenchmen Street - Tourists mob Bourbon Street in the French Quarter where the beer, wine and whiskey flow like the Mississippi and everyone parties hard. People who actually live in NOLA head over to the less traveled and far more tranquil area on Frenchmen Street between Decatur and N. Rampart when they want to go music club hopping. At night pockets of music lovers stand outside popular music bar/cafes mingling. Then they do what the bands inside do: They stay at one place for 40 minutes or so, and then migrate to the next.

Hints: 1.) Jump onboard the funk, soul, blues and brass train at Blue Nile, which was the first club on the strip to offer live music. It also has the largest floor for dancing and shaking your hips. And if you're lucky you might catch Troy "Trombone Shorty" Andrews performing. Nice vibe. 2.) Cafe Negril is a smaller, calmer place and a favorite with the locals. Bands with names like John Lisi & The Delta Funk and the Soul Project perform here.

7. City Park/Pepsi Tennis Center - Tennis pro Gerald Davis has been a teacher at this well-run and friendly tennis center for a couple of decades. Take a lesson with him, or the other pros, and you can play on any of the 26 lighted courts, which include 16 hard courts, 10 clay courts and there's also a practice court with two backboards. The complex is part of the 1,300 acre City Park that is just a 15-minute drive from downtown. If you don't have anyone to play with there's always the Monday Night: Tennis "Drop In" Doubles ($8); Tuesday Night: Intermediate Adult Tennis Clinic ($25); and for those just learning the game there's Wednesday Night Beginner Adult Tennis Clinic ($25).

Hints: 1.) City Park is the home of The New Orleans Museum of Art, the city's oldest fine arts institution, which has 40,000 artifacts of French and American art, photography, glass, and Japanese works. 2.) The City Park New Orleans North Golf Course features an 18-hole course that offers a convenient and affordable round of golf with water hazards on eight of the holes. The new Practice Center offers a full-service driving range with 74 range stalls and two grass hitting areas.

8. Crescent City Blues & BBQ Festival - The New Orleans Jazz & Heritage Festival is the granddaddy of American music festivals. And every October, on a long mid-month weekend, the NOJ&H Foundation sponsors this blues-centric festival in Lafayette Square. Entry is free for general lawn sitting and standing. Or there is a $250 VIP Pass, which is good for the entire weekend and provides special viewing and seating areas at both stages, a complimentary bar and a deluxe indoor hospitality suite with a balcony view of the park. This year the acts included Taj Mahal, Jon Cleary & the Absolute Monster Gentlemen and the very frisky Nikki Hill band.

Hints: 1.) The acts on the stage are fun to listen to, but the multicultural crowd of young, old, locals and visitors drinking beer and having a good time offers superb people-watching. 2.) The lines to the BBQ stands for the Pulled Pork Mac & Cheese, Voodoo Alligator Kickers and Shrimp Po' boys are mercifully short and quick. 3.) The vendors offer special menus for vegetarians, vegans and those who eat gluten-free.

Creole Cuisine. Napoleon's silverware. Tennis in a multi-purpose park. Loft-like lodgings. Funky music. Book a trip to NOLA for the New Orleans Film Festival and as you watch a superb melting pot of international films you can also enjoy the heart and the soul of the city.