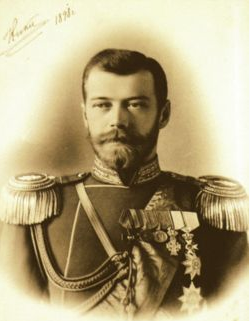 Newly elected New Orleans City Councilwoman Jackie Clarkson, actress Patricia Clarkson's mother, seems to be asking the recovery czar to take a brief time out before privatizing some city offices and putting on a metaphorical show.

WDSU reports of Recovery Czar Ed Blakely, who seems to be jumping the shark, "He's reorganizing and taking on several more departments -- including arts and tourism, code enforcement, safety and permits and the Office of Economic Development. 'Before, I was a role player to get resources so someone else could produce a show,' Blakely said. 'Now I'm the producer and director.'"

This is an old school Czar, I don't have a photo of Blakely.

Putting on a real live show Sunday are New Orleans musicians Alex Chilton (The Letter) and Susan Cowsill (Hair), among other friends, to help pay medical expenses for Robert Strong, a bistro employee recently shot in the jaw during an armed robbery on St. Charles Avenue. Also at the benefit, martial arts instructors will offer safety and self-defense lessons, Keith Marszalek reports in NOLA.com. (Benefit Details).

The bar manager at the French Bistro Crepe Nanu will need five more surgeries to reconstruct his jaw. At last year's Crepe Nanu holiday party, after my husband's band jammed, a round of Karaoke lasted most of the night with Susan bringing down the house and Alex on the sidelines. Robert's service was always a big part of the experience, and I wish him a full recovery.

Following is the full WDSU story on the Czar, who needs to focusing more on producing safety for New Orleans citizens than anything else.

The city's recovery czar is making a power play to have more control over New Orleans' rebuilding even though many residents insist his goals have fallen short.

Ed Blakely is changing the name of his office to the Recovery and Development Administration.

He's reorganizing and taking on several more departments -- including arts and tourism, code enforcement, safety and permits and the Office of Economic Development.

"Before, I was a role player to get resources so someone else could produce a show," Blakely said. "Now I'm the producer and director."

But Councilwoman-At-Large Jackie Clarkson said the council hasn't given the OK for those departments to fall under Blakely's control and plans to meet with him to talk about it in the next few days.

Before those talks, Blakely will meet with the council's Special Projects and Economic Development Committee. The recovery czar and several others will give a proposal on restructuring economic development efforts in New Orleans, including plans for possible public-private partnerships.