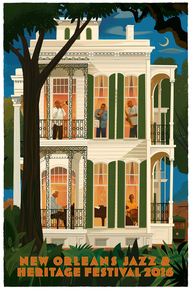 Don't cry for New Orleans. While it was a time to mourn the loss of a great talent, Prince, the New Orleans Jazz Fest was a confirmation and celebration of the reincarnation of the City many had written off as dead a decade earlier. New Orleans is again playing the music of "we" and serving-up the multiplicity of seeds, roots and flowers that are America. It is a welcome, even desperately needed resonance when fear and exclusion have come to dominate from political rhetoric to cultural xenophobia. America needs New Orleans to remind us of not only where we have come from but also where we can go. The New Orleans Jazz and Heritage Festival delivers and brings into harmony the melody of diversity.

This year's two week Festival (46th) was a far cry from those rustic events on the vast infield of the Fair Grounds Race Course, between Esplanade and Gentilly, when New Orleans was part of our educational (Tulane and Loyola University) and cultural foundation in the 1970's. Then, the dynamism of rapid social change, the cracking in the walls of segregation and exclusion, was reflected in the music from jazz hall to church. The Jazz Fest rapidly thereafter evolved into a global stage under the leadership of both artists and civic leaders reflecting the mosaic of New Orleans, African-American to Cajun, Jewish to Muslim, LGBT to clergy.

Rising from the Dead by Talent of the Artist:

Katrina, too nice a name for a hurricane that killed and destroyed so many lives, brought about an existential threat to the Jazz Fest and City. However, it was not just the winds and waters that posed the challenge. Some proclaimed that the hurricane was God's punishment - a city of sin that stood out like a pimple on a puritan facade that deserved to be burst. Others simply viewed New Orleans as too vulnerable, untenable and not worth rebuilding. (See: "New Orleans: Love Me or Hate Me for My Freedom")

While many of those forced to flee Katrina have never returned, New Orleans stands tall above. Now, it is an investment that is paying dividends economically as well as culturally, nowhere more evident than this year's Jazz Fest. Hundreds of thousands from the US and global citizens seeking this most desired experience packed into what all of a sudden seemed the tight confines of the Fair Grounds oval, and overflowing into the neighborhood with street parties to entrepreneurial vendors. More hotels are going up to meet the demand. Restaurants, from the Zagat reviewed to lost in translation were packed. In 2007, on our first trip back since Katrina, New Orleans was visibly wounded and still trying to regain its feet, but at least for me the Phoenix rising was already evident. The artists, homegrown and the pilgrims envisioning the new cultural Mecca, performed to sparse audiences, more for themselves but with the zeal of true believers and converts. While New Orleans history has been checkered like that of many regions of America, it was always the art, music and diversity that made the city rise above. (See: "Linked by Tragedy...Revived by Music")

Global Music Greats on Pilgrimage while Locals Nurture the Mecca!

This year's Jazz Fest brought to town some of the biggest global names in music, from Pearl Jam, Stevie Wonder, Elle King, Herbie Hancock, Mystical..... There was a cultural and musical platform for the small country of Belize. Dede Saint-Prix and his band from Martinique delivered an energetic Caribbean beat performance in French. The African ancestral communities of the Garifuna people were featured in their crafts, foods and culture. However, according to organizers, 90% of the artists came from New Orleans and the extended region which has given life to jazz, blues, zydeco.....

The seeds and roots of what is much of America's music from Nashville to Chicago, Seattle to New York were both adequately represented and then performed with great satisfaction to the audiences. Cajun bands, (Robert Jardell & Pure Cajun), performed at the Lagniappe Stage. Traditional jazz to its more avante- garde manifestations were featured in several oversized tents overflowing with young and old. The gospel tent echoed with inspirational hymns that one did not need to be a Christian to absorb the art and spiritualism. The overflowing blues tent, immediately adjacent had some of the most memorable performances as well as projecting artists with local links who otherwise normally perform in small road houses and Treme bars but now had thousands gasping and screaming for more. Little Freddie King and Johnny Lang could have done encores into the next morning.

Zydeco is a fusion of everything that Louisiana is: Cajun, Blues, Country, Jazz and even a bit of Spanish (encuentro). The Corey Ledet Band performed some of Zydeco's more characteristic beats tunes at the "Sheraton Fais Do-Do" stage. Then, as if inspired by the evolution, I heard a revolution - Rai sound (from Africa's Maghreb) was another spice added to this great band. It reminded of another great local artist on the Jazz Fest stage who we have admired since our time as college students in New Orleans. James Rivers playing jazz and blues with every wind piece instrument including the bag pipes, kool and inspirational like the national anthem sung by a former slave! (Watch: "James Rivers Movement")

Its Own & Evolving Beat! 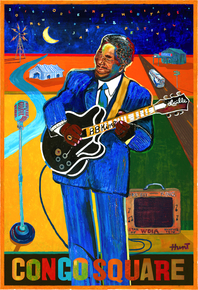 New Orleans has its own hip hop roots, just different enough that the performance by several local artists on the "Congo Stage" stood out for energy and artistic creativity. The addition of violin by one of the local artists was not only a new sound but the opening of the door to perhaps new innovations in hip-hop. Perhaps it is my imagination, but I could trace the root of New Orleans' own hip-hop sound to the several "Mardi Gras Indian Troupes" that performed at the "Heritage Stage." (Many of New Orleans and regions "Black" population also has Native American roots when many escaped slaves found refugee among local American Indian tribes, although some tribes also practiced slavery.) These Mardi Gras troupes also marched through the Fair Grounds venue with colorful costumes and rhythmic singing/percussion adding to the sense of Festival.

Besides the James Rivers Movement, I have developed an affinity for several other local sounds. "The Honey Island Swamp Band" we first saw and heard at the "Green Parrot" in Key West. As is our habit, we first sit outside this musical venue to see if the music, energy and rhythm inspire us. Before we knew it we were drawn inside weaving and then dancing to their entrapping fusion of blues and Southern honky-tonk.

As much as entertainment, music has been an inspiration for revolution or at least self-reflection and change. Another New Orleans group we heard in Key West but now featured at the Jazz Fest is the "Andrew Duhon Trio." "The Moorings" their Grammy nominated album, is that amazing combination of poetry as lyrics and soul as rhythm. While many of the songs are worthy of our acclaim, "Just Another Beautiful Girl" is a statement on how perceptions and the appreciation of beauty and the way forward can be suffocated by inflexible culture and stereotypes. In the end, the bigot is the biggest loser. (Listen to more of Andrew Duhon)

As we were walking out of the Festival, I heard two men who in appearance seemed to belong to two different worlds. One said, "with all the crowds, there was not one fight that I see." Then I realized that I had been shoved and shoving through throngs and the only thing that anyone had to say to me was to offer me a joint. When the police appear bored, even if vigilante, you know that's good for the crowd and the police!

The second weekend of Jazz Fest experienced unusually stormy weather, well perhaps not any more abnormal than the cloudless first weekend when Purple Rain doused the crowds below as a plane painted tributes to Prince above. New Orleans had also lost in the last year some of its own greats, (most notably Allen Toussaint), generally only personally felt by the intimate local music community. The visiting performers from around the country though knew the names, acknowledged the inspiration and influence, particularly the Red Hot Chili Peppers who brought on the standards from The Meters, The Neville's and Radiators to play a couple of songs with them.

The Mississippi River brings through New Orleans much of what the US exports, from agriculture to manufactured. New Orleans' own exports of music and culture ironically may be best appreciated in European jazz cafes and Latin America's plazas. It is too bad that the Ole River does not flow upstream, as culture at least once did to deliver the roots and diversity that now defines American music, jazz to blues to rock.