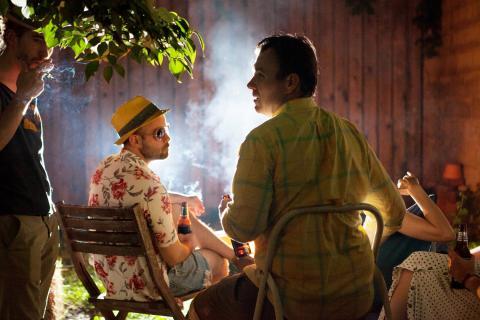 NPL's writer-director Whit MacLaughlin swerves up to the sidewalk on Fairmount Ave. on his bike in his sky-blue helmet and cargo shorts, hops off and smiles broadly. He has just completed final tech rehearsals for NPL's new piece. His troupe of actors have been writing and developing it over a year of chaotic sessions and meditative theater retreats around the country.

Last year they scored a huge hit with 27 which depicted a purgatorial way-stage of famous rock stars Janis, Jim, Kurt and Amy, who all flamed out at age 27. The ingenious set by Matt Saunders was a purgatorial rec-room that gave a glimpse to a galactic torrent just outside. The piece had the actors only utter few bits of barely coherent text, but their choreography and pantomime, nonetheless carved dimensional portraits of the iconic rockers.

For The Adults MacLaughlin held unscripted studio improvs at arts residencies around the country -- in Sag Harbor, New York; Seattle Washington; North Carolina and in Philly. "I was really interested with bringing a newer generation of performers together with some of the actors who I've worked with for 15 years. I would have them in 4 hour long improvisational sessions, without any direction from me," he explained.

"It wasn't conceived separately, there was no playwright, much of it comes from the personalities of the actors," he assures. "Sometimes it developed in real-time, there is some text by the actors that they've written, that gets massaged and edited and introduced into the show. Then I massage and shape it," MacLaughlin typically doesn't try to tamper with this process until it starts to organically form. "It's mysterious," he assures. 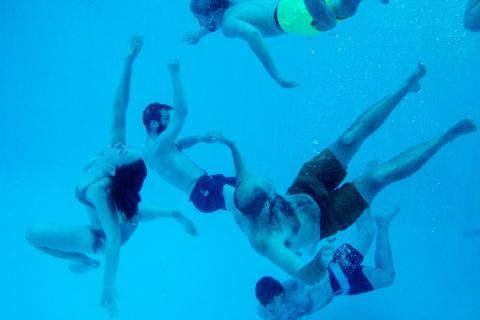 But in the long improv sessions, MacLaughlin observed that the scenarios had generational themes that echoed themes in Chekhov's The Seagull. The primal natures of two generations on the level playing field in the woods, where everyone's primal or hidden natures are liberated. A common theme in Russian literature of the absence of the trappings of their lives in the world strip away their social identities.

Visually, MacLaughlin drew inspiration from the paintings of Eric Fischl. "He takes figure painting seriously. The fleshiness in his painting tells real stories, but the stories are just out of reach. These are real people, with a vulnerable, voyeuristic sensuality. It was that ambiguous narrative space that I was drawn to." That substructure of visual and narrative 'substructure" MacLaughlin said, stimulated the piece.

Meanwhile, NPL veterans and the newer members weighed in with their generational points of view. MacLaughlin said it opened up challenging dialogues. "The Adults actually asked the basic question of what is an adult. Is it a good thing or a bad thing, should I be worried about my true self. When does everything change in your life. Is it as simple as the loss of innocence. Is it as different for everyone, where does it break, where does it meet?"

MacLaughlin is particularly sympathetic to what the current generation of college students and young people are facing now. "With the economic situation and competitiveness, it is really hard for this generation to embark on their true lives. They don't have the same entry level opportunities that we baby boomers had, for instance, " He said the piece helped him examine his own generational point of view as being so different from when he was younger.