Pepsi wants to sell you a feeling, with a little soda on the side.

This year marks the 40th anniversary of the soda giant's famous "Pepsi Challenge" campaign, which asked people to do a blind taste test to see if they preferred Pepsi or Coke. To celebrate, the company is re-launching the challenge, complete with celebrities like Usher and Serena Williams, as well as Vine and Snapchat sensation Jerome Jarre. But instead of picking Pepsi or Coke, the new campaign asks fans to take part in sports, tech, design and music challenges. 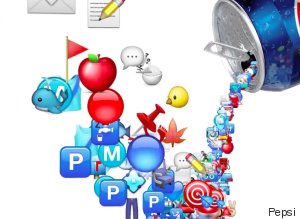 A new Pepsi ad released as part of the challenge. The can dispenses emojis instead of soda.

The modernized challenge isn’t completely devoid of images of Pepsi cans, and there will be a taste test component in some markets. But the ad push centers largely around creating an emotional connection with the Pepsi brand and less on lauding the taste of its cola.

That's because the company's ethos is about more than just a bubbly drink, said Brad Jakeman, the president of PepsiCo's Global Beverages Group.

“This is a brand that has stood next to major cultural moments all around the world; it’s a brand that always operates in the consumer zeitgeist,” Jakeman said. “The brand is much bigger than a product concept, and actually that has allowed us to do a lot of interesting things with this brand beyond soda.”

It makes sense for Pepsi to minimize the campaign's focus on soda because the sugary, carbonated drink is falling out of fashion. Americans in particular are opting more often for energy drinks and enhanced waters as the nation becomes more health-conscious. PepsiCo’s snack division, Frito-Lay, has helped buoy the company amid sluggish soda sales in recent years. 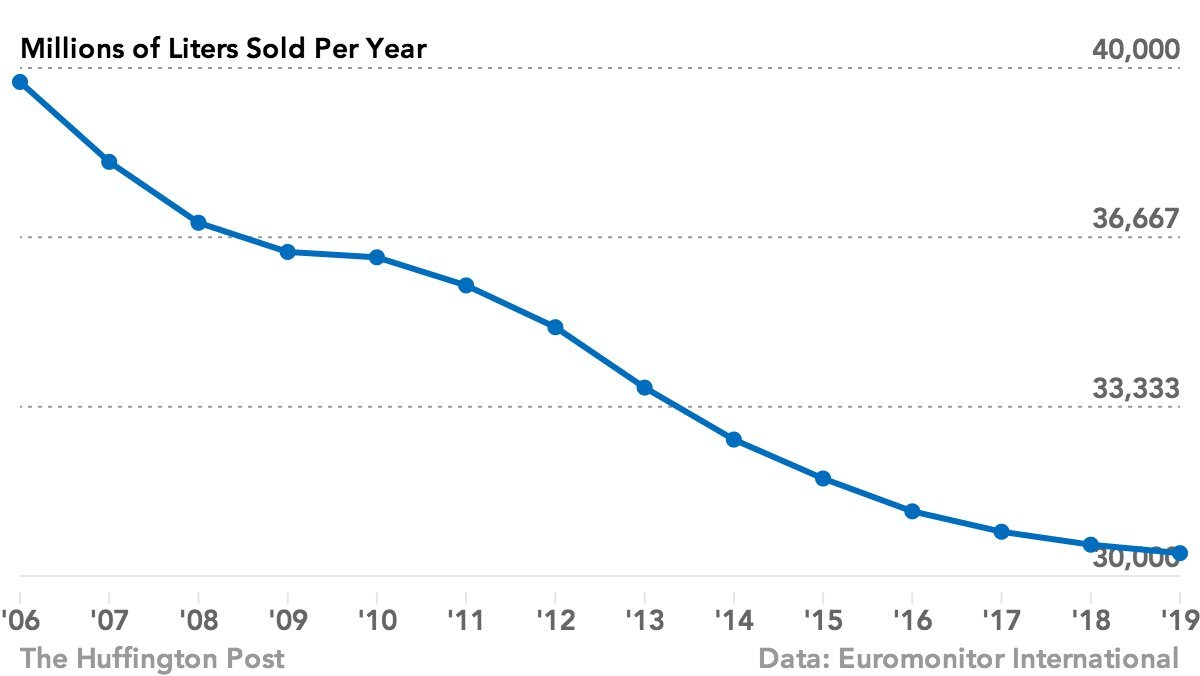 The decline in millions of liters of soda sold in the U.S.

The Pepsi Challenge was first imagined as a direct provocation to the company's main rival, Coke. At the time, Coke was a big-time national brand, while Pepsi was mostly popular regionally. As a result, Pepsi had to focus on innovations -- plastic two-liter bottles and aggressive marketing -- to make a dent in Coke’s lead, according to former Pepsi CEO John Sculley.

“Everything that I was expected to do at Pepsi was about competition with Coca-Cola,” said Sculley, who is also the author of Moonshot! Game-Changing Strategies to Build Billion-Dollar Businesses.

Forty years later, that strategy doesn’t make sense in a world where Coke isn’t Pepsi’s main problem. Now, changing tastes and smaller upstarts offering a wide array of alternatives to soda are some of the biggest threats to the company.

“If you’re Pepsi, you have to do something,” said Tim Calkins, a marketing professor at Northwestern University’s Kellogg School of Management. “Trends are not going their way.”

This isn’t a problem unique to Pepsi. Legacy companies like McDonald’s and Coke are also searching for ways to give people a warm and fuzzy feeling about their brands even as shoppers eschew their products. Coke’s Super Bowl campaign encouraged viewers to make the Internet a more positive place by adding the hashtag “Make It Happy” to negative tweets, which flagged a bot to turn the text into cute cartoon images. McDonald’s also courted controversy after the chain released an ad highlighting messages like “thank you veterans” and “keep jobs in Toledo” that franchisees often feature on the signs outside their restaurants.

“What you’re seeing now is less emphasis on the product because they find themselves in this situation where the product itself is not that appealing,” said Denise Lee Yohn, a brand consultant who has worked with Burger King, New Balance and other top companies.

It’s hard to say whether creating a halo around a brand actually translates into selling more soda or burgers, Calkins said. It's easier to track the impact of old-school promotion tactics, like giving out coupons, than campaigns based on social media.

Now, the company will wait and see what kind of success it can have with a Pepsi Challenge that relies heavily on people liking it enough to tweet about it or talk about it on Facebook. “The challenge is can they come with something that’s really compelling," Calkins said.