Just hours after the FBI released the first photos of suspects in the Boston Marathon bombing, a new photo of Suspect 2 emerged.

UPDATE: Dzhokhar Tsarnaev, 19, was captured on Friday in Watertown, Mass. Read more about his apprehension here.

The FBI has not publicly confirmed this photo as Suspect 2, but Green told the Huffington Post that an agent told him, "this is probably the best we have right now." The Associated Press has also authenticated the photo. 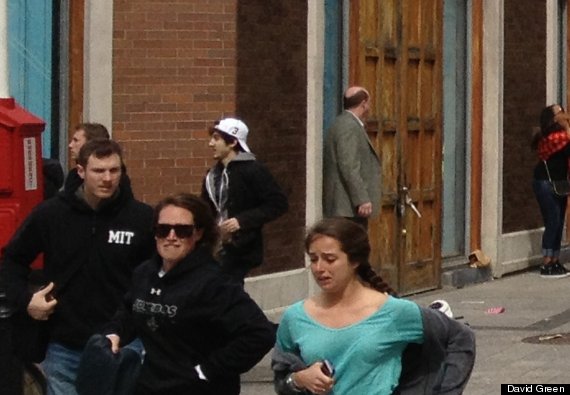 After finishing the marathon, Green said he collected his belongings, and planned to meet with friends near the finish line. Then a pair of bombs exploded.

"The second bomb went off right in front of me," Green said in an interview with The Huffington Post.

One of his first instincts was to get a quick photo. Then he proceeded toward the victims to try to help. That photo can be seen above.

"I soon realized there was nothing I could do but step back," he said. "I couldn't believe what I was seeing [...] I saw people lying in the streets, it was complete mayhem."

It was the only photo he took, he said. Then he started to get some video of the scene.

Little did he know that a man shown in his photo could be one of the men now wanted by the FBI. In the photo, the man seems to be walking away from the scene and he appears to have no backpack.

"This speaks to the power of social media," Green said this evening. "A friend reached out to me and said look at your photo, that's definitely the guy."

Green got in touch with the FBI tonight and said he spoke with multiple agents. He specifically asked if they were OK with him publishing the photo publicly to his Facebook page and he was told it was fine. So he posted it again.

He wrote in the photo caption to family and friends, which he said he knowingly posted publicly so others could see:

I have been feeling down since the Boston Marathon bombing because I couldn't do anything to help the injured victims...until now. Thanks to my friend Jason who pointed out to me that the photo I took right after the second bomb and posted on FB has suspect #2 in the left hand corner of the photo. White baseball cap turned backwards, black sweatshirt, NO BACKPACK right after the bomb went off. Compare to the ones posted by CNN, it is unmistakable. I spoke to the FBI and it is may be the best photo they have at current time!!! One step closer to taking these @!#?#'s down...share as much as you can so that if someone knows this person they can turn them in.

The post has gone viral with more than 5,000 shares in a few hours and it has since skyrocketed to more than 12,000 shares.

The photo started getting attention on Reddit around 8 p.m. ET. A debate emerged whether it was digitally-altered or not.

Green's original post on Facebook, time-stamped Monday before the FBI released any photos, showed that it was not.

According to The New York Times, Green did not originally notice the man in the white hat, but he instead called the FBI earlier in the week to report another man, "who was standing still and yelling instead of running."