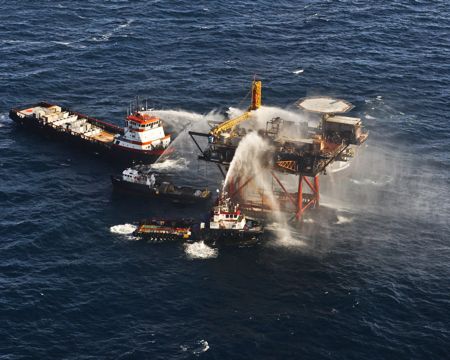 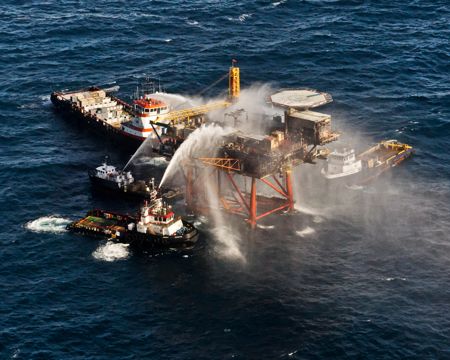 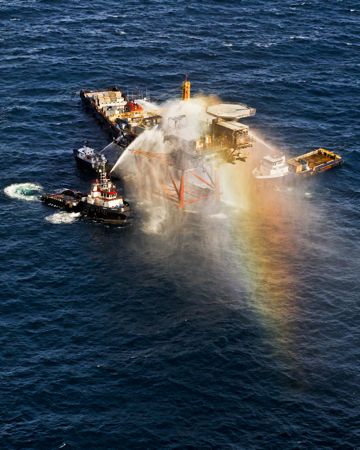 Pilot Bonny Schumaker of the California non-profit OnWingsofCare and New Orleans photographer Jerry Moran flew over the Mariner platform fire today and got these photos.

The Coast Guard update reports that 13 people were on the rig and that all 13 have been accounted for after a fire of undetermined origin broke out on the rig this morning at 9 am CST. The workers were immediately rescued after they had donned survival suits and jumped into the Gulf of Mexico waters. After being picked up by a supply ship, they were flown to Terrebonne Hospital in Houma, LA.

Coast Guard officials said that the Mariner structure is a platform and not a rig. However Governor Bobby Jindal said it was producing oil and gas and this is substantiated by company documents. Jindal said it was believed there were at least 100 barrels of oil stored on the platform and that this is what accounted for the fire, which was reported out at 4 pm.

The platform (Vermillion 380) is owned by Mariner Energy, and during the last week of August 2010, production from this facility averaged approximately 9.2 million cubic feet of natural gas per day and 1,400 barrels of oil and condensate, according to company documents.

Mariner Energy has interests in 350 Federal offshore leases in the Gulf of Mexico, 110 in development.

Mariner drilled five offshore wells in the third quarter of 2009, two of which were successful: the Vermillion 380 was one and Mariner has a one hundred percent working interest.

According to Mariner the damaged well was producing 47 percent oil and 53 percent natural gas at year end 2009.

Mariner Energy is an independent oil and gas exploration, development, and production company headquartered in Houston, Texas, with principal operations in the Permian Basin, South Texas and the Gulf of Mexico.

Pilot Schumaker has been documenting the aftermath of the BP Deepwater Horizon Macondo wellhead explosion since May. She has also served on the Sea Shepherd expeditions to Antartica, but her Gulf of Mexico work is credited to her foundation, OnWingsofCare.

Along the way, as we arrived at blue water, we saw three distinct large pods (20-30 individuals) of gold-colored rays, and a large school (25-30 individuals) of bottlenose dolphins near them. All of these were in a region with moderate amounts of fairly healthy-looking sargassum.

But Schumaker also said that the Gulf did not look healthy as she flew to tthe platform.

Prior to reaching blue water, the first 50 miles off shore are a very strange thick milky green with some strange black streaks spread throughout, with no healthy sargassum and no signs of life. Where there is still blue water, and there are many such places, there typically are bottlenose dolphins and good sargassum. The rays were a welcome sight for sure, though, as I have not seen those within 75 miles of shore for nearly two months now.

All the more reason that media should not abandon the Gulf of Mexico just yet.