Scientists are one Earth-sized step closer to discovering a planet outside our solar system that could be suitable for life.

In a study published online Tuesday in the journal Nature, NASA announced the discovery of Kepler-20e and Kepler-20f, two exoplanets -- planets outside the Solar System -- that are about the size of Earth and orbit a star similar to the sun.

"This is a most important milestone," Francois Fressin, the lead author of the paper describing the planets, told HuffPost. "It demonstrates for the first time that Earth-sized planets exist around other stars, and secondly that we are now able to detect them."

Scientists detected the new planets using data from the Kepler spacecraft, a space telescope with a mission to "search for habitable planets."

Since it was launched in 2009, NASA's planet-hunting Kepler telescope has found evidence of dozens of possible Earth-sized planets. But Fressin's report is the first to provide confirmation, said Alan Boss of the Carnegie Institution for Science in Washington. He's a member of the Kepler science team but not an author of the paper.

The two new planets are part of a five-planet system located about 1,000 light years away.

The Kepler spacecraft detects potential planets by looking for faint dips in light from far-away stars. The dips occur when a planet crosses between Kepler and a star and obstructs the light coming from the star. Scientists must observe a planet candidate transit a star at least three times before it can be confirmed.

According to NASA, the research team also found that unlike our solar system, which features the larger and more gaseous planets farther away from the sun, the five planets in the Kepler-20 system alternate in size.

"It means that the formation process that happened for this one could be different than with our solar system," said Jason Rowe, a research scientist at NASA Ames Research Center. "It's a learning process. Now we're realizing that there's a larger variety of solar systems out there."

Earlier this month, NASA announced the discovery of Kepler-22b, a planet in the habitable zone -- where liquid water can exist -- with an orbital period and temperature similar to Earth's. But the planet is much too large to harbor life.

"We need to combine these two," Dr. Fressin told HuffPost, referring to the Kepler-22b and Kepler-20 discoveries. "We need to find [an Earth-sized planet] at a longer orbital distance."

While Kepler-20e and Kepler-20f are too hot for liquid water to exist, the possibility that life once existed on them cannot be completely ruled out. Linda Elkins-Tanton, the director of the Carnegie Institution for Science's Department of Terrestrial Magnetism, who wasn't involved with the research, told reporters on Tuesday that water -- and therefore life -- may have existed on one of the planets billions of years ago.

Scientists have so far confirmed 33 planets that Kepler has discovered, but with more than 2,300 potential candidates waiting to be confirmed, the most exciting discoveries may lie ahead.

"In the cosmic game of hide and seek, finding planets with just the right size and just the right temperature seems only a matter of time," Natalie Batalha, a co-investigator for Kepler mission, said in a statement. "We are on the edge of our seats knowing that Kepler's most anticipated discoveries are still to come." 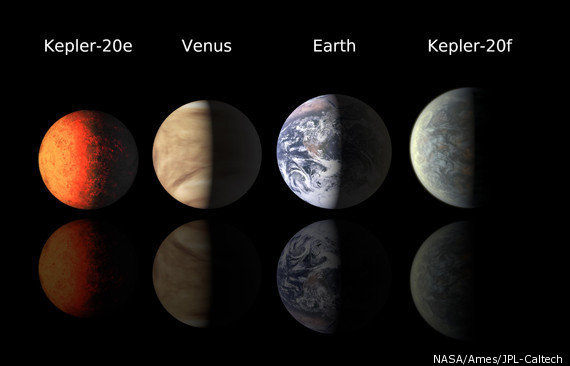 This chart compares artist's concept images of the first Earth-size planets found around a sun-like star to planets in our own solar system, Earth and Venus. (NASA/Ames/JPL-Caltech) 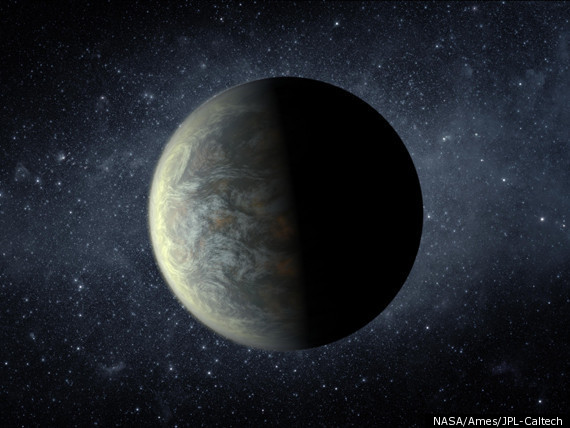