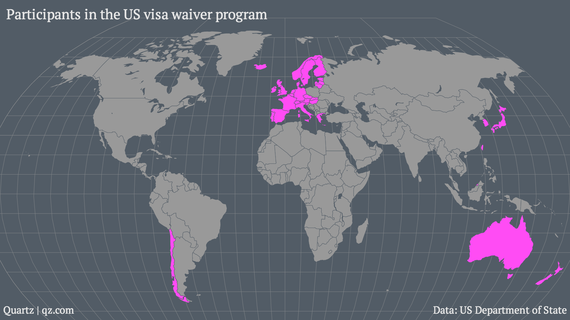 In the wake of the San Bernardino shootings, the worst terrorist attack on American soil since 9/11, it is only natural and correct that the United States should once again reevaluate its border control and visa policies. But it defies reason that the recent bill, H.R. 158, passed by the US House of Representatives, seeks to do exactly that by targeting nationalities that have little to do with the current terrorism threats faced by the US.

The recent bill passed by Congress aims to clamp down on the visa waiver program with provisions that essentially discriminate against Iranians. The ACLU calls H.R.158, passed last Tuesday by overwhelming support (419 yes), as a measure calling for "blanket arbitrary discrimination based on nationality and national origin."

The bill, together with an accompanying piece of legislation, S.2362, the Visa Waiver Program Improvement and Terrorist Travel Prevention Act of 2015 seeks to revoke visa waiver travel privileges for all citizens of VWP countries who are dual nationals of Iraq, Syria, Iran, or Sudan.

What is most striking about the bills is that they single out countries for added concern based on politics rather than legitimate security threats. Iran, for one, is arguably the most stable country in the Middle East today. Moreover, the Government of Iran says it is actively and directly battling ISIS.

Iran is still associated in the American imagination with terrorism, it's true, and the government does support groups like Hamas and Hezbollah out of various ideological and security interests. Yet, there were no Iranians involved in any of the major terrorist attacks in recent memory, from September 11 attacks, to attacks in Madrid, London, Bombay, Paris and elsewhere. Indeed, as a Shia majority country, Iran is very much a victim of the sectarian, Wahhabist brand of jihadism that has propelled those attacks.

As the ACLU makes very clear, "There is no evidence to support the blanket assertion that citizens of VWP countries, who are dual nationals of these four countries, are more likely to engage in terrorist acts against the U.S."

By eliminating the travel waiver benefits for all dual nationals from these four countries, the United States will be effectively making it enormously more difficult for a vast range of people - many of them refugees, journalists, artists, human rights and development professionals and scholars - to enter the country.

It is also timely to mention that in the aftermath of 9/11, Iran cooperated with the United States to stem the flow of Al-Qaeda agents dispersed in the invasion of Afghanistan. It arrested and handed over terrorists who poured into its territory from Afghanistan directly to the US or its allies in the region.

Not so long ago, the Iranian government, despite its hostile rhetoric against the US, even cooperated with Washington in the invasion of Afghanistan by providing intelligence. What happened next is a familiar and sad story: Iran, for its cooperation, landed on George W. Bush's 'axis of evil.'

This was a slap in the face of the then reformist president and Iran's pro-democracy movement, and strengthened the hand of hardliners, who argued, perhaps correctly, that Iran was rewarded for its cooperation by being demonized even further by the United States. It's widely believed in Iranian circles that the rise of the bellicose Mahmoud Ahmadinejad was propelled by this fumbled moment in US foreign policy.

Congress' discriminative bill also denies visa privileges for dual national Iranians a few months after the Obama Administration reached a historic deal with Iran to curb its nuclear program substantially. A deal that many Iranian Americans, many European Iranians and more importantly millions of people inside Iran, supported.

For them, supporting the deal meant an opening to put an end to more than three decades of hostility between the two governments in Tehran and Washington and making sure the flames of war and conflict do not spread. The widespread popular backing of Iranians across the world helped President Hassan Rouhani seal this deal, and to push Iran's hardliner Supreme Leader, Ali Khamenei, to accept its terms.

Today, Iranians hope that the agreement will lead to cooperation in other areas of mutual concern, especially as both the United States and Iran find themselves on the same side of the fight in the region, against the rise of Daesh, or ISIS.

What is most worrisome about H.R.185 is that will alienate the millions of Iranians who have pressed their government to act responsibly in the world. It will inexorably damage perceptions of the United States inside Iran, and will have a similar impact as the use of the term "axis of evil" by the Bush administration had on the political dynamics and balance of power between moderates and hardliners.

Iranians will also see this as yet another move that goes against the spirit of the nuclear deal, for the bill will also carry wide implications for the Iranian economy. Anyone from the 38 countries, including European nationals who travel to Iran would need a visa to travel to the US; this will discourage or prevent many businessmen, tourists, academics and others from travelling to Iran.

This will have severe consequences on Iran's economy, impacting Iranians socio-economic status; the same people who were hoping that by the lifting of sanctions, as the major outcome of the nuclear deal, years of economic isolation would end.

Hardliners have already started using the new visa restrictions to justify their anti-American rhetoric and to intensify their crackdown on those elements in Iran that seek cooperation and engagement with the United States.

Lawmakers might argue that it's the Iranian government's long-lasting inclusion in the list of states that sponsor terrorism that has led to including Iranians among the nationals of four countries that have been singled out. But the collective punishment the bill imposes is not geared towards the Iranian government. It's toward Iranian dual nationals who are predominantly critical of their government's policies and support democracy and universal human rights values.

Even though the bill is supposedly designed in response to recent security threats, it fails to address the real issues and fuels the anti-American narrative hardliners in Iran have been promoting all along and will create strong resentment amongst Iranian Americans whose love for this country is no less than any other Americans and have significantly contributed to science, culture, economy of the country they love and have chosen as home.

The H.R. 158, could make Americans or Europeans of Iranian origin into second class citizens, and those who seek refuge in the US to escape being treated as second class citizen in an autocracy, now face the same thing from a country that they had hoped would offer them equality, justice, and respect. All three fundamental values that the bill denies Iranians.