This fall, an extreme minority in Congress made a massive miscalculation when they shut down the government at an estimated cost of $24 billion and threatened an even bigger economic crisis -- defaulting on our debt -- all in the name of repealing the president's health care law. It was an extreme agenda that backfired coast to coast. And now, some in Congress are taking aim at another priority -- the environment. This week alone, while the country memorializes the anniversary of Super-Storm Sandy, we will see a pro-coal rally at the Capitol as well as hearings and new legislation to limit the EPA's ability to regulate carbon pollution.

Yet, according to a new poll of swing Senate states conducted by Hart Research for the League of Conservation Voters, it seems that the same Tea Party extremists may be making another misstep with their attacks on the EPA, the science of climate change, and those working for a safe and healthy future.

Attacks on the EPA are falling flat. Voters trust the EPA, not a Congress with single-digit approval ratings, to decide whether we need regulations that will reduce carbon pollution. In fact, the polling in Alaska, Arkansas, Colorado, Georgia, Iowa, Louisiana, Michigan, Montana, New Hampshire, North Carolina, and Virginia, showed that nearly three in every four voters in these swing Senate states support EPA regulations that would set limits on the amount of carbon pollution from power plants. 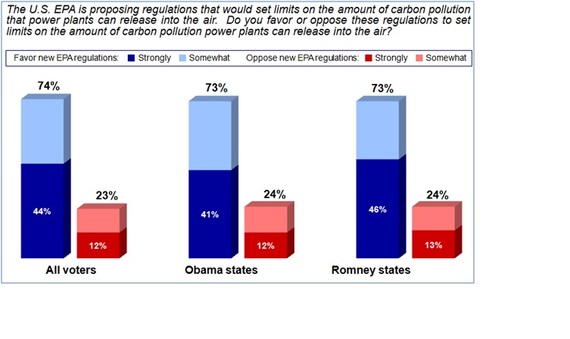 Our poll of swing states looked at the attacks that we hear every day from anti-science politicians, and put them up against the facts. We put the best arguments for limiting carbon pollution -- like how the EPA pollution safeguards could spark innovation and result in a net increase jobs -- against the attacks most often used by climate change deniers and other critics backed by polluting industries like Big Oil. And the results showed just how out of touch the Tea Party and their allies really are.

The anti-environmental message is a losing argument with the American people. After voters hear arguments for and against the regulations, support for them increases. A solid majority of voters -- 64 percent -- say they want their senator to support these EPA regulations. And it's worth repeating, this is in swing states.

The polling also reinforced what we have already learned about Americans' low tolerance for climate change deniers. Solid majorities in swing states won by either President Obama or Governor Romney last cycle said they would be less favorable to a candidate for Senate if they deny climate change.

These findings are a reminder of just how out of touch the Tea Party wing of Congress is on environmental issues. People want action, not temper tantrums. The American people are ready for a government that solves problems while growing our economy and protecting our environment.