Despite different methods, questions and sponsorship, the latest Alaska surveys are finding remarkably similar results. An automated Rasmussen poll finds a near tie between Murkowski (at 34%) and Republican nominee Joe Miller (35%), with Democrat Scott McAdams not far behind (27%). A survey sponsored by the Club for Growth, the conservative group that is backing Miller, finds a "three way toss-up," with Miller at 33%, Murkowski at 31% and McAdams at 27%. Results from these two polls are also within a few percentage points of the findings from the Democratic firm Public Policy Polling (PPP), released a few days ago. 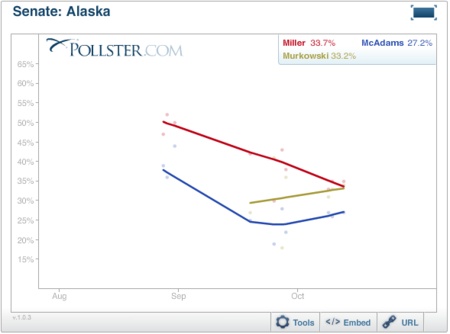 As noted here previously, measuring support for Murkowski's write-in bid presents a challenge to pollsters, given that her name will not appear on the ballot. Both the Club for Growth and PPP surveys initially asked respondents if they would vote for Miller, McAdams or "someone else." PPP asked an explicit follow-up question offering the names of third-party candidates and an option to write in Murkowski. The Club for Growth release does not specify how they identified Murkowski supporters, but with live interviewers they had the flexibility to ask a simple open-ended probe, such as "which candidate are you supporting?" The Rasmussen poll did not mention Murkowksi's name in the first part of their question, but did present her name as an option for respondents to choose.

The fact that these three different techniques yield such similar results suggests that awareness of Murkowski's write-in bid is high and her support is solidifying. While many of the pollsters I talked to suggested using different measurements to gauge the range of Murkowski's support, most agreed that the differences would likely narrow as Election Day approaches. The similarity among these three polls is a sign that the polls are closing in on a more accurate forecast, although again, the uncertainty about whether Murkowski supporters will actually turn out and write in her name means we will not know for certain until November 3.

In Nevada, a new Mason-Dixon poll conducted earlier this week shows Republican Sharon Angle with a 2-point edge over Democratic Senator Harry Reid (47% to 45%), a margin that falls well within the poll's 4 percent margin of error. Our current trend estimate in Nevada -- likely the last snapshot of polls conducted before last night's televised debate -- shows a virtual tie (46.4% for Angle, 46.3% for Reid). 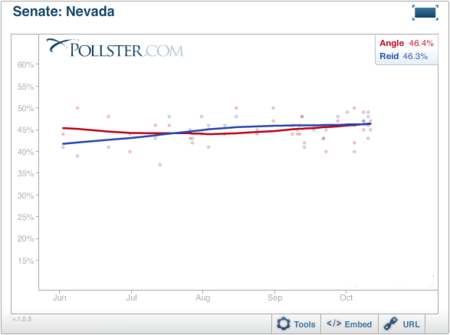 While the Nevada polls have shown results within the the margin of error for the last month, the long term trend has been a very gradual but steady increase in Angle's support. While the current margin between Reid and Angle is obviously razor thin, the trend is not encouraging for Reid.

In West Virginia, the Democratic Senatorial Campaign Committee (DSCC) released a survey it sponsored showing Democrat Joe Manchin five points ahead of Republican John Raese (49% to 44%). That result is slightly better than the 3-point edge for Machin on this week's Democratic affiliated PPP poll and the tie measured by CNN and Time, and much better than the six-point Raese lead found by Rasmussen Reports last week.

Our standard trend estimate for West Virginia gives Manchin a two-and-a-half point lead (46.9% to 44.4%) with the DSCC poll included, up slightly from a 0.8 point Manchin edge yesterday without it. Either way, West Virginia still very much merits a "toss-up" designation.

Finally, in Connecticut, the latest Quinnipiac University Poll now gives Democrat Richard Blumenthal an 11-point lead over Republican Linda McMahon (54% to 43%), essentially matching the results of most other recent polls. Two Quinnipiac polls in September had yielded much closer margins, but Blumenthal has led on McMahon on every survey conducted this year. Our trend estimate now gives him a nine-point lead (52.1% to 43.1%).