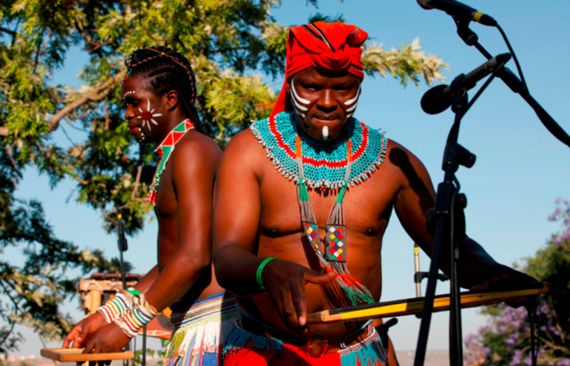 It is largely a story of cultural demise and death. Yet the current tale of musical bow instruments is only partly a sad one thanks to a faraway martial art form, and the musical quests of young musicians.

A musical bow is an ancient musical instrument that can be picked, struck or bowed to create sound. Similar to a hunting bow, the musical ones are simple in construction but their acoustic principles are complex: the melodic material created by a bow is made out of overtones emitted from the string.

Imagine a taught string that is plucked or struck in a rhythmic pattern. We hear a note but at the same time, a series of quieter overtones emerge and a skillful player can manipulate these to create music. Often these subtle sounds are amplified with a container of sorts - a calabash, metal tin, or sometimes the player's own mouth.

It's an ephemeral music made from grasses, sticks, and animal gut that ultimately disintegrate with time.

Southern Africa is home to a myriad of musical bow variations but in urban areas the instruments are rarely seen or heard. The most commonly played bows are the Xhosa umrhubhe mouthbow and uhadi struck bows of the Eastern Cape and Cape Town. The makhoyana gourd-resonated bow is from KwaZulu-Natal.

In Swaziland one encounters the makhoyane - a cousin of the Zulu instrument. The Xitende is a gourd-resonated bow of southern Mozambique. The elusive and beautiful lesiba comes from Lesotho.

There are numerous virtuosic bow players alive and well, including South Africans like Madosini, Mantombi Matotiyane, Bavikile Ngema and the Ngqoko Cultural Group, as well as my own former teacher Dizu Plaatjies. From Mozambique there is Matchume Zango.

But there are fears that many musical bows are slowly but surely becoming extinct; makers and players are not getting any younger. This was in the back of some minds when the University of KwaZulu-Natal hosted the inaugural International Bow Music Conference in early 2016.

The conference brought together leading scholars and performers from across southern Africa, South America, the US, India and beyond. Many of the papers presented were rooted in southern African traditions like the umrhubhe, uhadi, the makhoyane and the chipendani from Zimbabwe.

The conference was also a chance for the local researchers to get to know the research surrounding the Brazilian berimbau bow of Capoeira fame and the opportunity to hear many new compositional approaches.

Musical bows have traversed oceans. The Angolan mbulumbumba is linked to what later became the berimbau in Brazil. The extraordinary malunga bow of the Siddi community in India has its roots in east Africa.

Bows also claim other homes across the globe, from the Appalachian Mountains - shown in Alan Lomax's film Appalachian Journey - to Rwanda, Nigeria and New Zealand.

The berimbau functions as an accompanying instrument in the Brazilian martial art form Capoeira, which has fast spread across the globe. Capoeira combines self-defence, acrobatics, dance, music and song. UNESCO recognised Capoeira in November 2014 as an "intangible cultural heritage of humanity".

Capoeira has been described as a cultural icon of Brazil and is widely practiced around the world.

Two themes seemed to emerge at the conference: how some bow traditions are dying, and how innovative performance and research has engulfed the berimbau.

David Dargie, author of Xhosa Music, has done indispensable fieldwork and recordings from the Eastern Cape. He has framed much of the conversations in southern Africa about these instruments.

In his time, Dargie has witnessed the decreasing numbers of players and variations of instruments. He is concerned about the longevity of these traditions. Dargie's thoughts were mirrored by many other scholars.

My own research into the makhoyane calabash-resonated bow of Swaziland deals with many of these issues. In Swaziland, the makhoyane is the most common traditional instrument beyond the human voice. Yet most of the remaining players are elderly and have few opportunities to perform.

Fortunately we are moving into a different phase. There are young musicians who choose to engage with their national or regional heritage, or are on the quest for beauty and "new sounds" in remote corners. Often their efforts and experiments are left out of the conversation about the need for salvage endeavours.

The work of Luka Mucavele at the Universidade de Eduardo Mondlane in Maputo was particularly striking as he has experimented with building his own instruments based on the sonic principles of existent southern Mozambican instruments.

The work of Jason Finkelman, a berimbau player from Illinois, was also inspirational. We share a joint interest in improvisation and how musical bows can function in free musical spaces.

Greg Beyer, another berimbau player, has a different musical approach. He has commissioned and composed many new works for berimbau (solo and ensemble). Beyer integrates extended playing techniques and hocketing ensemble play into this new repertoire.

Amid the rallying calls to save the likes of the makhoyane and uhadi, there is a more complex story that involves young innovators and composers (like Matchume Zango, Thobile Makhoyane, Luka Mucavele and uMthwakazi) while acknowledging the cultural bearers of our time.

The narrative that bow music traditions are dying out is therefore complicated further by the slowly increasing numbers of younger players and their interesting and diverse new creative paths.