Scientists say they've discovered the fossilized bones of a new type of pterosaur, a flying dinosaur-age reptile, which lived about 68 million years ago and had a wingspan of nearly 10 feet (3-meters).

The skeletal bits of the mid-sized pterosaur were found in Sebeş-Glod in Romania's Transylvanian Basin, famous for its rich array of Late Cretaceous fossils, including crocodylomorphs (ancient relatives of crocodiles), mammals, turtles and dinosaurs like the dwarf sauropod Magyarosaurus dacus and the dromaeosaur Balaur. Scientists dubbed the new reptile Eurazhdarcho langendorfensis and say it belonged to a group of pterosaurs called the azhdarchids.

Pterosaurs lived among the dinosaurs and became extinct about the same time, but they were not dinosaurs. They are sometimes wrongly called pterodactyls, which actually just describes the first genus of pterosaur discovered by scientists in the 18th century. Small pterosaurs developed during the Triassic Period, about 230 to 200 million years ago. Later, during the Jurassic and Cretaceous periods, more advanced forms of the flying reptiles, like azhdarchids, started evolving. 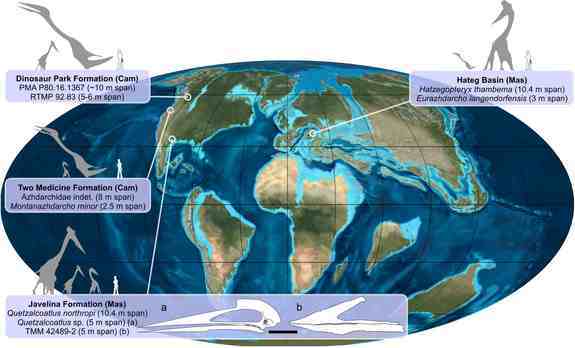 Map to show the global distribution of faunas containing small-medium and giant-sized azhdarchids.

"These were long-necked, long-beaked pterosaurs whose wings were strongly adapted for a soaring lifestyle," researcher Darren Naish, a paleontologist from the U.K.'s University of Southampton, said in a statement. "Several features of their wing and hind limb bones show that they could fold their wings up and walk on all fours when needed."

The wingspan of Eurazhdarcho indicates it would have been "large, but not gigantic" compared to some of its cousins, Naish said. (The researchers pointed to the example of the giant azhdarchid, Hatzegopteryx thambema, whose bones found in the Romanian town of Ha?eg show that its wings would have stretched out 36 feet, or 11 meters, during flight.) The discovery brings new evidence to the debate about how azhdarchids lived, the scientists say.

"It has been suggested that they grabbed prey from the water while in flight, that they patrolled wetlands and hunted in a heron or stork-like fashion, or that they were like gigantic sandpipers, hunting by pushing their long bills into mud," Gareth Dyke, a paleontologist from the National Oceanography Centre Southampton, said in a statement.

The newly found fossil was uncovered alongside dinosaurs and other terrestrial animals, suggesting that azhdarchids stalked small animal prey in woodlands, plains and scrublands rather than in coastal habitats.

"Eurazhdarcho supports this view of azhdarchids, since these fossils come from an inland, continental environment where there were forests and plains as well as large, meandering rivers and swampy regions," Dyke said.

The findings were detailed online Jan. 30 in the journal PLOS ONE.