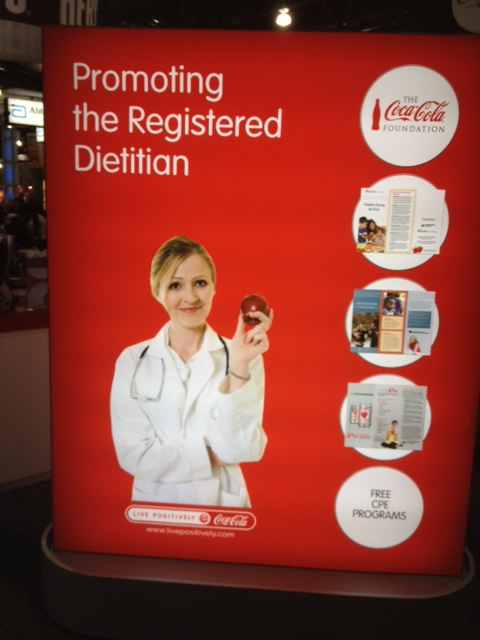 If there is one topic that Americans are generally confused about it's nutrition. Although the word simply means the materials necessary in the form of food to support life, our cultural understanding of it has shifted dramatically -- with various industries co-opting the word and changing its meaning. Michael Pollan calls this "nutritionism" in his book In Defense of Food. "No idea could be more sympathetic to manufacturers of processed foods," he writes. "Nutritionism supplies the ultimate justification for processing food by implying that with a judicious application of food science, fake foods can be made even more nutritious than the real thing."

Convincing people of the healthfulness of these new foods -- processed foods that have been refined, stripped and altered, with synthetic vitamins, added whole grains, or antioxidants put back in -- requires experts to help convey this message. In addition to the billions of dollars spent on advertising directly for food products, Big Food companies also recruit America's nutrition professionals to spread their gospel. This is the topic of public health lawyer, Michele Simon's new report, which details "the food industry's deep infiltration of the nation's top nutrition organization." Simon is referring to The Academy of Nutrition and Dietetics (AND), the world's largest organization of food and nutrition professionals. All Registered Dietitians (RDs) must follow a curriculum designed by AND, they are then credentialed by AND, and all continuing education for RDs must be approved by AND.

According to AND's website, its current corporate sponsors include: Abbot Nutrition, Aramark, Coca-Cola, The Hershey Center for Health and Nutrition, National Dairy Council, General Mills, Kellogg's, PepsiCo and Unilever. In response to Simon's report, Ryan O'Malley, media relations manager for AND wrote in an email, "In its relations with corporate organizations, the Academy is mindful of the need to avoid a perception of conflict of interest and to act at all times in ways that will only enhance the credibility and professional recognition of the Academy and its members."

In Simon's report (the New York Times broke the story Tuesday) she describes a first person account of her attendance at AND's Food and Nutrition Conference and Expo (FNCE). "Junk food expo is really the best descriptor. As you walk in, all you can see are the massive booths of companies like Coca-Cola, and PepsiCo," she writes. She describes booth after booth of industry created nutrition information, without even a hint of impartiality.

"The food companies are being very strategic," Simon told me in an interview. "They know that RDs are the vehicles through which information is carried to the consumers, so they want to make sure that their message gets out loud and clear to these professionals."

Simon writes of her visit to the McDonald's booth where smoothies and oatmeal were on offer during the morning hours of the conference. "To visit the McDonald's booth, you'd think the fast food giant only sold oatmeal and smoothies," she writes. "I asked a few RDs why they were there and they said they were hungry. Fair enough, but it was clear that McDonald's had succeeded in positioning itself as a purveyor of healthy food while feeding RDs breakfast."

Simon points out that food companies are normalizing their products at these conferences. "The message is: It's perfectly fine to promote processed food as your everyday diet, as long as it has whole grains sprinkled on it or has fewer calories."

It's no surprise then that Americans are confused about nutrition and have trouble discerning which foods are actually healthful. "If you look at what comes out of that trade group for generalized nutrition messages, it is not: Don't eat junk food, don't eat soda," Simon said. "It's these namby-pamby messages that are not getting us anywhere, like 'everything in moderation,' 'no such thing as a good food, or a bad food' all these clichés come from the spokespeople and the official positions of that trade group--it absolutely keeps America confused."

Andy Bellatti, RD, agrees and says that he is appalled by the choice of industry sponsorships that AND has chosen to align itself with. "I think it does a huge disservice to the field and the credential," he said in a phone interview. "I think these kinds of partnerships drag the credential through the mud because they make the entire profession seem like it's at the mercy of these food companies."

One typically encounters RDs in a hospital or doctor's office and are therefore considered the most legitimate and qualified bearers of nutrition information. "It's very troublesome when you have the food industry co-opting health professionals and that's exactly what's happening," Bellatti said. "Who creates the curriculum for RDs? AND does, and no matter what college you go to, if you want to be an RD, it's an AND curriculum."

Bellatti went on to describe his experiences at FNCE, where he says, the industry is presenting biased studies about their products as the hard, indisputable science. "It's extremely problematic because you have industry presenting science," he told me. "And many RDs are a very captive audience -- not everybody is going into it with a critical mind. If a doctor or another RD is presenting, obviously on industry payroll, a lot of RDs go back to their practice and they just repeat what they've heard."

Aaron Flores, an RD who works in Los Angeles remembers a similar experience. "One specific education program that I went to a few years ago was a talk on artificial sweeteners sponsored by Diet Coke," he wrote to me in an email. "The message was that artificial sweeteners are safe -- but there is a lot of conflicting research out there. I would have preferred to hear a more balanced presentation, but of course that would not happen at a presentation paid for by Diet Coke."

Various RDs told me what's often perceived to be conventional wisdom regarding healthy foods is actually the industry speaking through nutrition professionals, which makes its way into the popular culture. For example, despite the fact that studies show consuming diet soda leads to increased waist circumference in humans and that aspartame raises the fasting levels of blood sugar in mice, potentially leading to weight gain and diabetes, the conventional wisdom claims that diet sodas are a good weight loss strategy.

RDs range in their position on the corporate sponsorship of AND. Indeed, Simon reports mixed responses at the conference but she did find it troubling that the majority of RDs surveyed supported corporate sponsors. "An overwhelming majority [of RDs] found the National Dairy Council, Kellogg, General Mills, and the maker of Splenda acceptable... it's a sign of how well these companies have succeeded in becoming a normal part of the American food experience."

Digna Cassens, MHA, RD, a practicing dietitian for 50 years, said AND's corporate sponsors present a "huge conflict." "But unfortunately no on really wants to speak out," she said in an interview. "It's sounds disloyal -- so speaking badly about my professional organization, which has given me the opportunity to practice professionally for 50 years, I find it disloyal."

Bellatti completely disagreed with this sentiment. He said he always voices his concerns at the end of sessions at FNCE conferences. "In every single case, I had RDs approach me and say they support me but were afraid to speak up," he said. "But voicing a concern is not violating anything. I have heard people say they are afraid of having their credential taken away, but I don't see that actually happening."

Further complicating the matter is the fact that many RDs are actually employed by large food service companies like Sodexo or Aramark, which often have contracts with hospitals and typically employ all the RDs on staff. According to Sodexo's website, it is the nation's largest corporate employer of registered dietitians.

One RD employed by Sodexo as the clinical manager of a major academic hospital refused to speak on the record. I asked her if it was difficult to convey the nutrition information she wanted to given that her employer makes many unhealthful foods, which comprise the fare in the hospital. She was hesitant to answer but seemed to acknowledge the conflict by saying, "All of our nutrition materials and guidelines come from the Academy [AND]."

Bellatti said in addition to hiring RDs, Sodexo also has a dietetic internship. "That is a major conflict because it's very hard for an RD to improve food offerings if they are employed by the very company that is putting out unhealthy food choices."

Some RDs have chosen not to renew their membership to AND based on its corporate sponsors. "As a former member of AND, I feel that by accepting money from corporate sponsors like Coke, PepsiCo, Hershey's, General Mills, etc., we compromise our credibility as a professional organization," Flores, the RD in Los Angeles said. "So I decided that I would vote with my wallet and I did not renew my membership."

Americans are bombarded with claims about nutrition and healthy eating for food and beverage products, but many of these messages are exactly what Pollan describes as nutritionism. "The food industry does a great job of keeping consumers confused about nutrition," Simon told me. "Most Americans don't realize the extent to which the nutrition advice they hear is influenced by these powerful economic interests. If people can't even trust the advice coming from nutrition professionals, who can they trust?"